Did the Ukrainian Postal Service (Ukrposhta) introduce a design for a new postage stamp with the message "Russian warship, go fuck yourself!"? Yes, that's true: According to an announcement by the postal service, an online competition was held to commemorate the widely reported Ukrainian border guards' defiant stance against Russian warships in February 2022 at the beginning of the Russian invasion of Ukraine. The winning stamp was designed by Borys Grokh, whose design prominently features a Ukrainian border guard holding up a middle finger to a Russian warship. 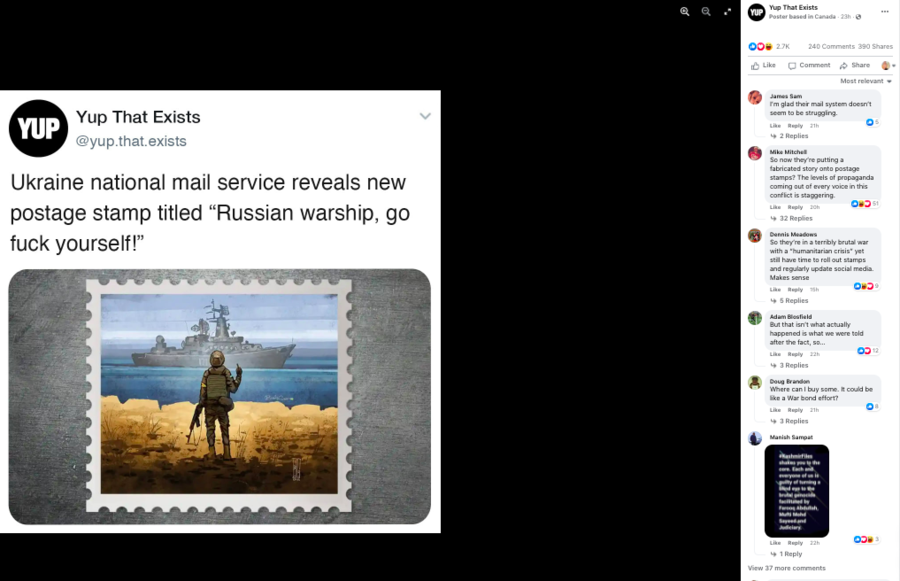 According to the announcement on March 12, 2022, Borys Grokh has been a painter all his life. He lived in Crimea but was forced to leave his home when Russia occupied it in 2014 and now lives in Lviv. He was impressed by report of the border guards' "heroic defense" and "decided to paint a picture to lift the mood and fighting spirit of Ukrainians," according to Google Translate.

The phrase "Russian warship, go fuck yourself!" is a translation from real audio of border guards refusing to surrender to Russian forces at a border post on Zmiiniyi Island -- also known as Snake island -- which is about 48 kilometers (30 miles) east of the Ukraine border with Romania in the Black Sea.

It happened on the first day of Russia's invasion of Ukraine on February 24, 2022. The audio begins "This is a Russian warship," by an unknown voice. It continues, translated into English:

I ask you to lay down your arms and surrender to avoid bloodshed and unnecessary deaths. Otherwise, you will be bombed.

After a pause, the Ukrainians respond:

The stamp is not available for sale yet but according to the announcement it will be in post office branches in the "near future" to send to friends abroad or to send "a fiery 'hello' to the Russians."

Intial reports on the incident said the guards were killed when Russians opened fire after the verbal exchange. But the Ukrainian navy announced their military personnel were alive and in Russian captivity in a Facebook post on February 28, 2022.

The Russian Defense Ministry said in a statement on February 25, 2022, published by Tass, the Russian state-owned news agency, that the men had voluntarily surrendered to the Russian Armed Forces.

The actual phrase in Ukrainian is not literally "Russian warship, go fuck yourself," but it is the best translation to portray the correct sentiment, according to translators.