Does a compilation video posted on Facebook show only war footage from the 2022 Russia-Ukraine conflict? No, that's not true: Although at least one of the clips in the video shows footage of the conflict, many are unrelated to the war in Ukraine.

The claim appeared in a Facebook post (archived here) published on March 9, 2022. It included the compilation video, titled "Russia vs. Ukraine war." The caption reads in part:

A composite image of the phrases in the caption is included below: 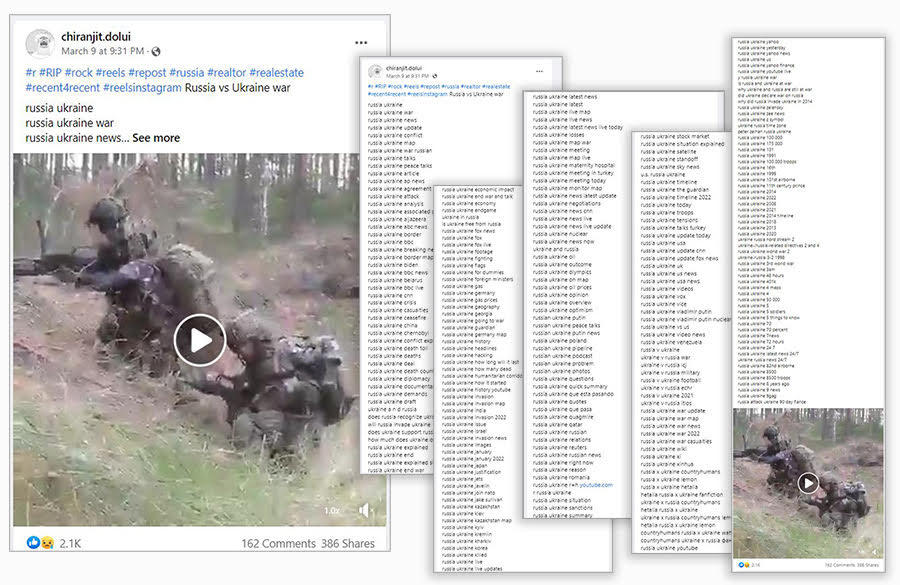 A fact check of the compilation video from Indonesian news website Tempo noted that several of the clips in the video had nothing to do with the 2022 Russia-Ukraine conflict. An exception was a clip used in the video between the 8:29 and 8:49 marks. The clip showed footage of a convoy of Russian military vehicles facing the Ukrainian border and was posted on February 25, 2022, by Sky News.

Lead Stories verified that many of the other clips showed events that occurred before the start of the conflict. Timestamps and findings are listed below:

This clip appears to show footage of Green Griffin 21 joint combat drills held by U.S. and German soldiers in 2021. Footage of the event was posted here on October 17, 2021.

This clip appears to show highlights from an amphibious landing during UNITAS 2021, a multinational military training conducted by the U.S. military and hosted by Peru. UNITAS footage starting at 1:37 can be seen in the Facebook video at 3:15. The UNITAS video was posted on October 5, 2021.

Several of these clips of the "Malka," a modernized heavy-duty cannon, were published in an article on December 17, 2019, by RT, a Russian state-controlled news company.