Did this woman witness a detonation or bomb attack that destroyed a theater where children were sheltering in the Ukrainian city of Mariupol on March 16, 2022? No, that's not true: Her path from a sports complex shelter to the evacuation site she describes on the video would not pass the theater location, which is in the opposite direction. Russian media are using this video as a story of a supposed witness to an Azov Battalion attack on fellow Ukrainians' children, while international observers and the government of Ukraine lay blame for the attack on Russian forces. The layout of Mariupol makes this witness' account improbable if not impossible. Moreover, she doesn't provide her name, nor those of people she is talking about, making it impossible to independently verify her account.

The claim appeared on Russian news websites and social media. The full-length version contains a video with the logo of the Anna News agency. The video was posted in this March 16, 2022, post on Instagram, (archived here) and excerpts can be seen in this story and in this video used by the Russian Ministry of Defense. The headline says "Refugees from Mariupol confirm" and continues:

...that the Azov Nazi group of UKRAINE demolished the Drama Theater. A woman evacuated with her children from Mariupol said neo-Nazis demolished the drama theater before retreating.

The woman in the video does not say her name or the names of those she refers to. Without corroborating evidence, her claim cannot be confirmed.

In a video posted on Instagram she says she took refuge in the basement of "Terrasport" and had been hidden there for 15 days. In Mariupol, the sports facility called Terrasport, is located at 132 Budivelnykiv Avenue. It is two kilometers from the Donetsk Academic Regional Drama Theater, as the Mariupol Drama Theater is officially called. She says (translated to English by Lead Stories native Ukrainian staff):

We opened our eyes while sitting in the basement of Terrasport. We ... were just told that the Russian military had come in, we needed to get out and go to the PortCity...

PortCity shopping and entertainment center was almost destroyed by shelling and fires as of mid-March. The path to it from Terrasport goes in the opposite direction from the theater, so while moving there, the woman could not see the theater building.

This Google map, embedded below, includes icons on the sports center, the shopping mall and the theater:

This annotated screengrab of the Google map illustrates the physical impossibility of the description given by the woman in the video. 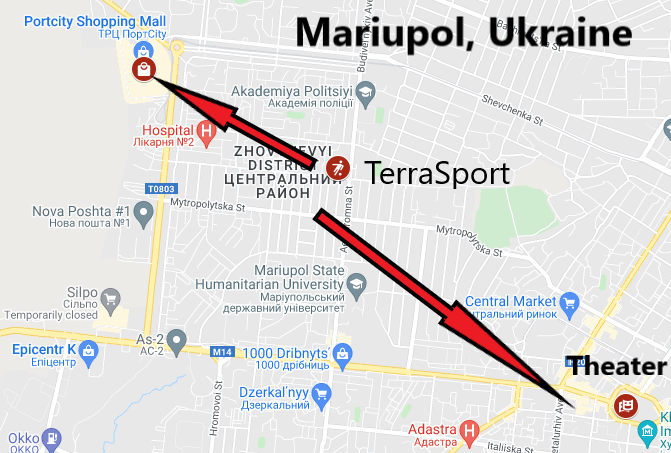 Asked about the Azov Battalion, she says:

When they left, they smashed the bomb shelter of the Drama theater, and people were simply brought to us with splinters. That's all.

The Azov Battalion is a controversial nationalist element of the Ukrainian national guard, currently fighting against Russia.

The woman in the video says that she didn't see representatives of the Azov Battalion:

We haven't seen them. They just came, put up a tank and didn't let us go out. We hid so we wouldn't be shot.

The building of the Mariupol Drama Theater was demolished on March 16. The Azov Batallion was one of the first to report this on its Telegram channel. But there are earlier reports in other city channels, saying that a bomb had been dropped on the Drama theater. Mariupol City Council said the bomb was dropped from a plane. The Russian-language Wikipedia page about the Azov Batallion includes no reference documents listing planes among the Azov Battalion's military hardware, nor do searches of independent media reports about Azov's arsenal.

The Russian Ministry of Defense ascribed the attack to the Azov Batallion while Mariupol has been under devastating shelling by Russian troops since early March 2022. According to Mariupol City Council estimates, about 100 bombs had been dropped as of March 13.