Is farmed salmon poison? And is the "grey" meat of a farmed salmon dyed with artificial colors that can make people blind? No, that's not true: Salmon flesh is not gray like a battleship. Ingested and metabolized carotenoids, regardless if the fish is wild or farmed, are what cause the flesh of salmon to develop its namesake color. Canthaxanthin and astaxanthin are carotenoids that may be included in the feed of farmed salmon and are approved by the FDA at set levels. The fish is not "dyed" after harvest, rather, farmed fish are fed a diet that includes carotenoid compounds that wild salmon have in their diet from natural sources.

These compounds have also been used to make therapeutic treatments for people with vitiligo and photosensitivity disorders, as well as skin darkening "tanning pills." Tanning pills are NOT FDA-approved, and studies have shown that that some people who were directly consuming canthaxanthin in high doses for the purpose of "tanning" developed crystal deposits in their retina. There are no studies showing a similar risk to human eyes from consuming farmed salmon that ate a diet with added carotenoid compounds. Salmon is considered a top source of omega-3 fatty acids, which protect eye health.

The claims about farmed salmon flesh being gray or causing eye problems go back over a decade, one video was posted on YouTube in 2011. The photoshopped image of gray cuts of salmon can be found in a 2015 article. The claim resurfaced in a Facebook post that was published on March 15, 2022, under the title "Farmed Salmon is Poison." It opened:

70% of salmon produced worldwide is farmed,
That contains artificial dyes.farm raised salmon is not pink, It's actually grey. Fisheries are aware of this which is why they add artificial dyes in the salmon's feed, to give it the pink color. One of many chemicals they use is Canthaxanthin, This has been linked to cause sight loss in humans,

Farmed salmon could well be the most toxic food ever produced. Yet is promoted as being "Healthy" 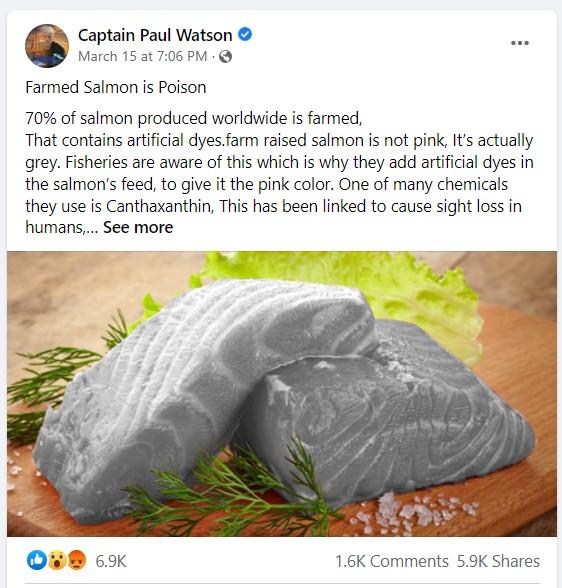 There are numerous controversial issues in the salmon industry regarding wild caught vs. farmed fish, or if fish should even be eaten at all. This fact check is narrow in scope, and is not addressing any of these other issues. It will look at four claims introduced in this Facebook post: that farmed salmon is poisonous, that it is the color gray shown in the photo, that the fish are fed artificial dyes to change their color and that eating these fish could pose a threat to human vision.

There are concerns about environmental contaminants in fish, especially mercury and PCBs. In the case of farmed fish, there are additional concerns regarding aquaculture medications. Fish treated with animal drugs approved by the FDA for use in aquaculture (see page 4 of FDA document here) are safe to eat. The EPA and FDA recommend two or three servings (8 - 12 ounces total) of fish per week for women of childbearing age (less for children). In a PDF information sheet some types of fish with the highest mercury levels are listed as "Choices to Avoid." Salmon, with no qualification if wild caught or farmed, is listed among the "Best Choices" -- not poison.

This image (below center) was produced with a digital editing program. The color was selectively removed from one area of the photo, making the fish flesh look an unappetizing dark chalky gray (the post uses the British preferred spelling of grey) color. Below is a comparison of the original image found on TinEye (left), the image from the Facebook post (center), and a copy of the image with all the color removed (right).

Claim: Fish are fed artificial dyes to change their color

The pink color in the flesh of salmon, whether farmed or wild, comes from the food they eat. These compounds are the same carotenoids that cause flamingos to be pink. Wild salmon get these compounds from eating small crustaceans or by feeding on other fish with crustaceans in their digestive tracts. Farmed salmon have carotenoids added to their diet. There are natural variations in the color of salmon flesh even in the wild, from the dark red color of the sockeye salmon, to the pale color of the wild ivory king salmon, which are king or chinook salmon (a variety that typically has pink flesh) that genetically lack the ability to metabolize and store the carotenoids present in their natural diet. Although these wild fish eat the same diet as other chinook, about 5% have this genetic difference, which causes the flesh to be white.

Commercial salmon producers supplement the diet of farmed salmon with carotenoids, the trademarked Carophyll or other products containing astaxanthin, a food additive that will cause the flesh of farmed fish to be a deeper (and more marketable) pink, but astaxanthin is also an essential nutrient for the fish that acts as a provitamin for vitamin A. This compound can be derived from natural sources like algae and krill, or synthetic sources. The European Food Safety Authority says:

The use of astaxanthin up to the maximum permitted dietary level for salmon and trout is of no concern for the safety of the consumer.

The FDA requires that salmon fed with feeds containing astaxanthin be labeled. The "color added" labeling encountered at the grocery store may make it sound as if the flesh was injected or soaked in a dye after the fish was processed, but this is not the case. The carotenoid compound is metabolized by the fish when it is alive, just as it is in wild salmon.

Lead Stories traced this claim back to a short YouTube video titled, "Artificial Coloring in Fish," which was posted on the NutritionFacts.org channel on February 27, 2011. At the 0:48 minute mark the narrator introduced the question of possible human health consequences while the video shows a medical paper on Canthaxanthine Retinopathy. Lead Stories found no reported cases of canthaxanthine retinopathy linked to salmon consumption, but found the 1999 photo essay from the YouTube video on jamanetwork.com. The condition in the asymptomatic patient, "retinal crystalline deposits arranged in a doughnut-shaped pattern surrounding the macula," was discovered during a routine eye exam. The 34 year old man, had a dark tan:

On further discussion with the patient, it was ascertained that he had been taking four 30-mg capsules a day of oral canthaxanthine (Orobronze; DeWitte, Greenville, SC) for the purpose of bronzing his skin.