Did a man named William Chester, who was born in 1744, live for 235 years with "McNulty Syndrome," which caused his body to age slower? No, that's not true: This video is made with digitally altered images and footage of actor Charlton Heston who died in 2008 at the age of 84. The images of Heston were taken from various times through his career, but all of the images have had an age-enhancing effect added to make Heston appear to be older than he was at the time the picture was taken. There is no credible publicly available record of a slow-aging condition called McNulty Syndrome, or a man named William Chester holding a longevity record.

The video was originally posted on TikTok by @jordanthomas4852, who posts many videos featuring digitally aged celebrities with a faceapp hashtag. A duet by @eugenenakiaparrish was posted on TikTok and then posted on Facebook on February 11, 2022. It was captioned: 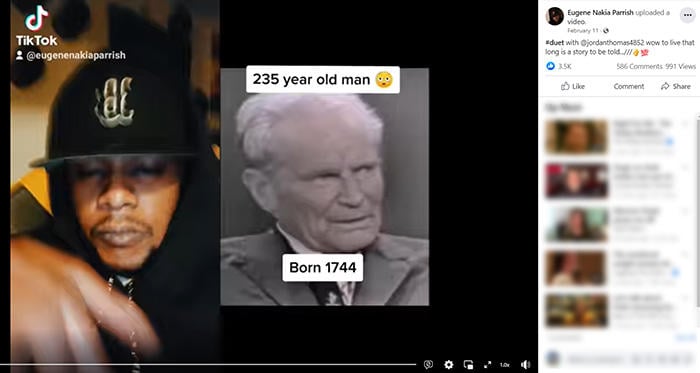 The auto generated narration of the video says:

William Chester was the oldest person in the world. Born in 1744. He died in 1979 at 235 years old. The truth to how he stayed alive so long remains a mystery. But historians say that he had a rare condition known as McNulty syndrome where your body ages 10 times slower. The media don't cover this because it would scare the public.

There is no evidence of a rare medical condition called McNulty Syndrome, only a few references to a fictional character Jimmy McNulty from the HBO drama, "The Wire." There is no record of any person living 235 years. Although the claims are questioned as a possible fraud, the record for the oldest person is Jeanne Calment, who purportedly lived to 122 years and died in 1997. The world's oldest man was Jiroemon Kimura who lived to 116 years and died in 2013.

Using reverse image search Lead Stories took screenshots from the video and was able to identify the original images of actor Charlton Heston which had been digitally age progressed to make him appear older than he was at the time. Below are five comparisons of the aged clip appearing in the video and the original images of Heston (Image opens larger in a new window).