Does a video show a Ukrainian press conference about President Joe Biden amid Russia's invasion of the country? No, that's not true: The video is from 2020 and includes footage of a press conference with a Ukrainian lawmaker who has been described by U.S. officials as an "active Russian agent." In the video he is sharing a recording of Biden's 2016 call with Ukraine's former president, Petro Poroshenko.

The claim appeared as the headline of a video (archived here) published on Facebook on March 12, 2022. The video opens with a man speaking, with subtitles in English: 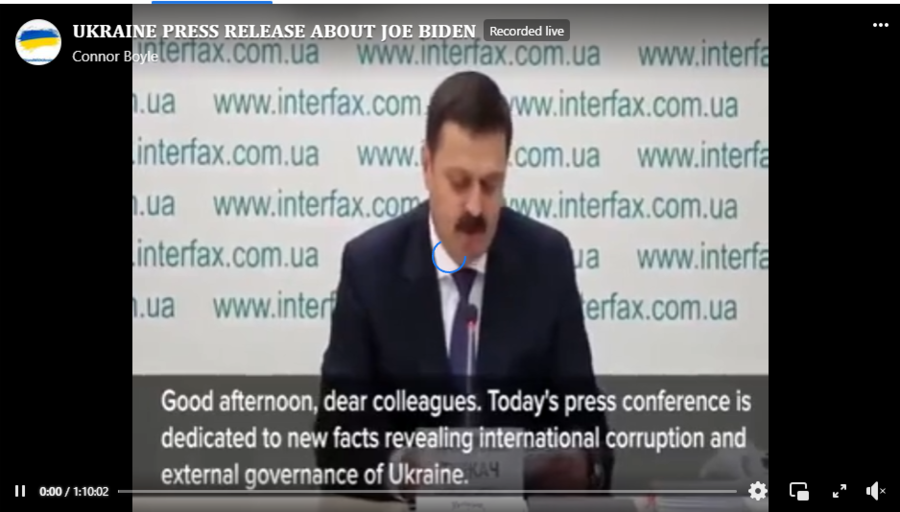 This video is not of a lawmaker in 2022 speaking about Biden, as Russia attacked Ukraine. Instead, it contains footage from a September 2020 press conference hosted by Interfax, a Russian news agency. Graphics shown during the Biden-Poroshenko phone call have been changed from Ukrainian text to English text. Video of the press conference was posted on the Interfax YouTube page. Lead Stories has translated the video description from Ukrainian to English using Google Translate:

A briefing on 'New Facts of International Corruption and External Governance of Ukraine' will begin on Wednesday, September 16, at 11:00 in the press center of the Interfax-Ukraine news agency. Participants: People's Deputy of Ukraine Andriy Derkach and senior member of the GPU Prosecutor's Office for Investigation of Economic Crimes of the Yanukovych Regime 2016-2019 Kostiantyn Kulyk.

Because of the leaked information about today's press conference last week it was announced that I was being sanctioned by politicians from the US Department of the Treasury under the request from Democratic senators. They really didn't want us to publish what we are going to release today.

The U.S. Treasury Department announced sanctions on September 10, 2020, against Derkach calling him "an active Russian agent":

Treasury designated Andrii Derkach (Derkach) pursuant to Executive Order (E.O.) 13848 for his efforts to influence the 2020 U.S. presidential election. Derkach, a Member of the Ukrainian Parliament, has been an active Russian agent for over a decade, maintaining close connections with the Russian Intelligence Services. Derkach has directly or indirectly engaged in, sponsored, concealed, or otherwise been complicit in foreign interference in an attempt to undermine the upcoming 2020 U.S. presidential election. Today's designation of Derkach is focused on exposing Russian malign influence campaigns and protecting our upcoming elections from foreign interference. This action is a clear signal to Moscow and its proxies that this activity will not be tolerated. The Administration is working across the U.S. Government, and with state, local, and private sector partners, to make the 2020 election secure."

This was not the first time Derkach spoke about the audio between Biden and Poroshenko. He also did so during a May 2020 press conference, also hosted by Interfax.