Does a YouTube video show a dogfight between Russian and Ukrainian fighter jets? No, that's not true: There's nothing in the 30-second clip that clearly identifies a warplane from either country and the maneuvers being made by the pilots would be highly unlikely in the middle of combat.

Experts are divided on whether the grainy footage is legitimate, to begin with. It could be from a flight simulator program, a video game or an airshow display, they suggest. It's also possible the video has been doctored, but there's no evidence the video comes from an air battle following the Russian invasion of Ukraine that began on February 24, 2022.

The claim appeared in a video (archived here) published on YouTube on February 26, 2022. It opened: 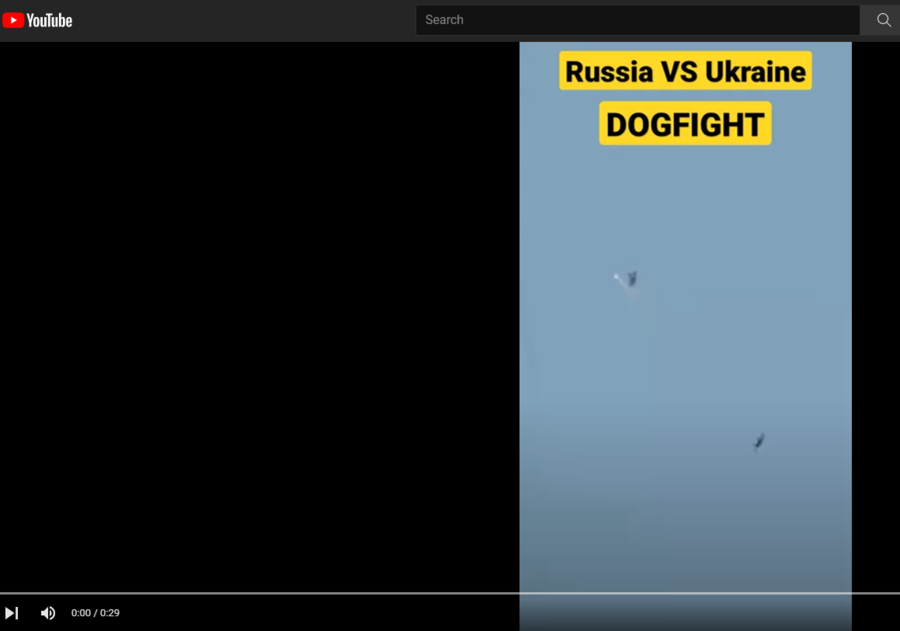 The low quality of the footage makes it hard to analyze and experts are divided on exactly what it shows.

Justin Bronk with the Royal United Services Institute, a defense and security think tank in the United Kingdom, told Lead Stories in a March 1, 2022, email that the planes in the video do look like Russian-made fighters:

With such grainy footage it's very hard to tell if this is legitimate or not.

I don't think it's from a game, but it could well be from an airshow display with a missile train and 'impact' added at the end by editing.

The two jets are both Sukhoi fighters of some description (I don't see canards, but that may be the limited resolution, and nose is a bit thin for Su-34).. So possibly Su-27s, 30s or 35s.

Karl Mueller, a senior political scientist at the RAND Corporation, told Lead Stories in a March 2, 2022, email that the video looks fake to him and other experts he knows:

I bounced it off a few of my aviation enthusiast/air wargaming cronies in their unofficial capacities, and the consensus is that it's most likely a video made with Digital Combat Simulator (DCS), but we don't have anything I can point at that proves it definitively because the resolution is so low. (Assuming it is fabricated, the creator did a nice job of making it look authentically shaky and low-res.)

Versions of this video appeared across social media (here and here). A third version comes complete with play-by-play commentary in Urdu-Hindi:

Colin Smith, a senior international/defense researcher at RAND, said in a March 2, 2022, email that the video may be legit, but it still leaves a lot of questions unanswered:

It does appear to be actual footage of two planes, but short of geotagging with time stamp, no way to know when or where it was taken. (note: I'm not a gamer, so no idea if this is what current video games look like) ...

I think it would be very tough to confirm either of these aircraft without military collaboration or photos of the wreckage of the downed plane.

James Williams, a senior engineer at RAND, said in a March 2, 2022, email that it's difficult to determine what's going on:

It's really hard to tell who's who, type of fighter, and whether or not the video was doctored since the aircraft that looks like it's been shot down disappeared before the explosion

So it's possible that another video showing explosion was spliced in

In his email to Lead Stories, Bronk said the video doesn't show a dogfight, whether real or simulated:

No, it is definitely not combat between the two jets shown in the footage. They are conducting manoeuvres as a pair and releasing defensive flares not weapons.

Mueller agrees. In his email, he said it looks like two aircraft are practicing close-in dogfighting maneuvers, which would not happen during wartime:

The thing is that you would never do that for practice in a place where someone might be shooting missiles at you for real, right? Certainly neither the Russians nor the Ukrainians would be messing around over enemy air defenses, and it's very unlikely that they [would] be doing it in a rear area where they thought they were safe and then one of them gets picked off by an enemy aircraft who snuck up on them and it's caught on video.