Is polypropylene from face masks a major source of microplastics in our lungs? No, that's not true: The benefits of wearing masks outweigh the risks. Microplastics (MPs) can be found throughout the environment. Nearly two-thirds of MPs come from synthetic clothing and textiles and the wear of tires while driving, according to a 2017 report from the International Union for Conservation of Nature. MPs can be found in water, soil and air. Because few are recycled and they don't break down, they continue to accumulate.

The claim appeared in a Facebook post (archived here) on April 19, 2022, under the title "Microplastics found deep in lungs of living people for first time." The caption of the post reads:

what could it possibly be from? 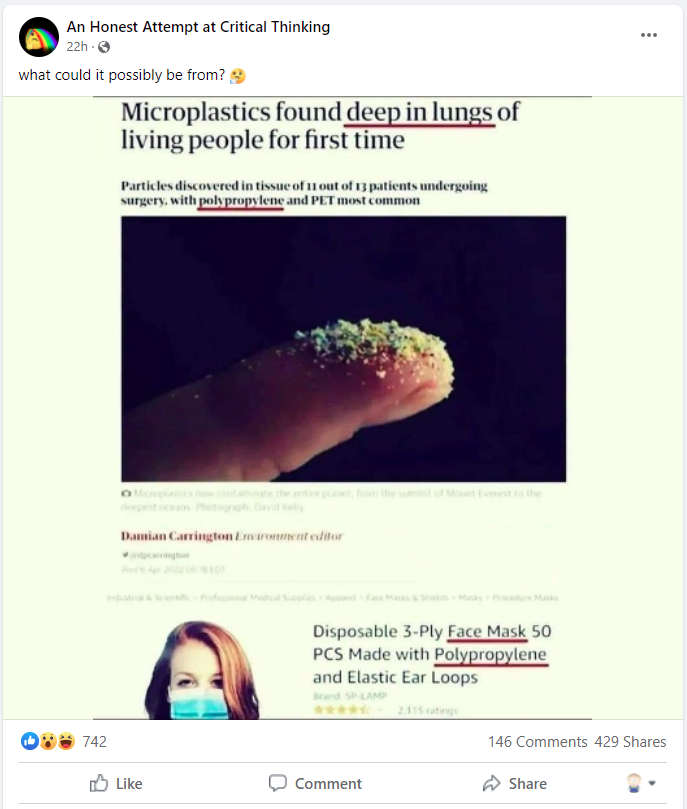 While not saying it directly, the Facebook post suggests face masks made with polypropylene are to blame for MPs being found in our lungs. Estimates vary, but one study suggests that billions of single-use masks or face shields are being disposed of each day around the world. However, the potential danger from the masks doesn't come simply from wearing them and breathing through them. Like all MPs, it's when the plastic breaks down into fine particles or fibers and enters the environment that it becomes a threat.

Both the World Health Organization and the Centers for Disease Control and Prevention have recommended the use of masks during the COVID-19 pandemic. Health professionals have used them for decades. A June 2021 study of the microplastic inhalation risk posed by wearing masks concluded the benefits outweigh the risks:

[T]he use of masks is crucial during the pandemic scenario even though they might contribute some microplastics inhalation, it is minor problem as compared with protecting humans from COVID-19.

A World Economic Forum article said MPs are polluting our lungs, but masks are not mentioned:

Microplastics in the indoor air result from the fragmentation through friction, heat or light of plastic objects found in our homes. These include toys, furniture, plastic bags, cosmetics, toothpaste and scrubs. Showering with a body scrub alone may flush 100,000 microplastic beads into the wastewater system and on into the air, says the Environmental Audit Committee in Britain, which banned microbead use in January 2018, following the lead of the US, Canada and New Zealand.

The majority of microplastics found in the indoor air, however, comes from plastic fibres released from synthetic clothing and textiles used in home furnishings. These microplastic fibres tend to be longer and therefore more harmful when inhaled. Today, synthetic materials, such as acrylic, nylon, polyester, make up some 60% of global textile production.

The International Union for Conservation of Nature said the same MPs are entering our oceans, too. These are the sources by percentage (Figure 4):

The online version of the Encyclopedia Britannica said the environmental and health impacts of MPs need to be monitored:

Microplastics are not biodegradable. Thus, once in the environment, primary and secondary microplastics accumulate and persist. Microplastics have been found in a variety of environments, including oceans and freshwater ecosystems. In oceans alone, annual plastic pollution, from all types of plastics, was estimated at 4 million to 14 million tons in the early 21st century. Microplastics also are a source of air pollution, occurring in dust and airborne fibrous particles. The health effects of microplastics inhalation are unknown. ...

Microplastics have been detected in drinking water, beer, and food products, including seafood and table salt. In a pilot study involving eight individuals from eight different countries, microplastics were recovered from stool samples of every participant. Scientists have also detected microplastics in human tissues and organs. The implications of these findings for human health were uncertain.