Did Adolf Hitler say that even in his death he would start World War 3? No, that's not true: This is a recycled conspiracy theory, and multiple historians told Lead Stories it didn't happen. Also, contrary to the claim's suggestion, Hitler and his Nazi regime were racist toward African Germans -- primarily based on skin color.

This world or should I say the Elite know exactly who we are!

Read this a few times! And make no mistake as to who we REALLY ARE! We're the people from both sticks! 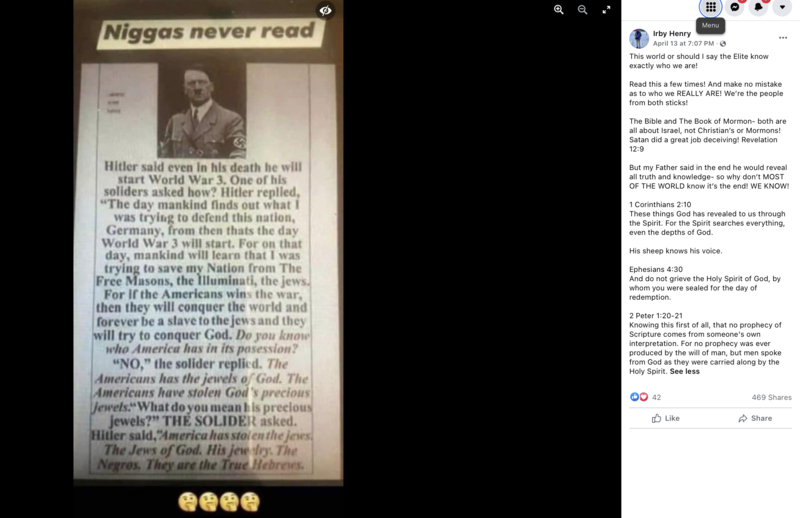 A portion of the claim in this post implied that African people who were enslaved in the United States were the "true Hebrews." According to the Southern Poverty Law Center, the Hebrew Israelite movement is rooted in Black Judaism and has a complex history, with some smaller and misguided branches adopting discriminatory rhetoric.

Lead Stories emailed Anson Rabinbach, a professor emeritus of history at Princeton University and the author of several works that extensively cover Nazi Germany, Austria and European thought in the 19th and 20th centuries. Rabinbach responded on April 20, 2022:

There is no evidence and it is unlikely that Hitler would've made that statement. In his last will and testament he might have said something of this nature but he did not.

Wolf Gruner, the Shapell-Guerin Chair in Jewish Studies and a professor of history at the University of Southern California (USC), told Lead Stories in an April 19, 2022, email:

I can't say for sure. But it does not make much sense, since the Second World War was not over yet and Hitler thought he would win.

Paul Lerner, a colleague of Gruner's and director of the Max Kade Institute for Austrian-German-Swiss Studies at USC, told Lead Stories in an April 19, 2022, email:

To the best of my knowledge, Hitler did not say this. I have never come across the line in his speeches or writings.

The Office of the Senior Historian at the United States Holocaust Memorial Museum told Lead Stories in an April 19, 2022, email:

This claim is fraudulent. There is no evidence of Hitler having said this.

The Holocaust Museum's website include a page on African Germans being discriminated against and persecuted by the Nazi German regime. And in 1925, Hitler himself stated in his manifesto, "Mein Kampf":

The Jews were responsible for bringing negroes into the Rhineland, with the ultimate idea of bastardizing the white race which they hate and thus lowering its cultural and political level so that the Jew might dominate.