The claim appeared in an article titled, "NASA announces communication with 4 alien races (Video)" (archived here) on April 21, 2022. It opened:

NASA spokeswoman Trish Chamberson has publicly acknowledged the existence of alien civilizations, noting that the state agency is currently in contact with four alien races. 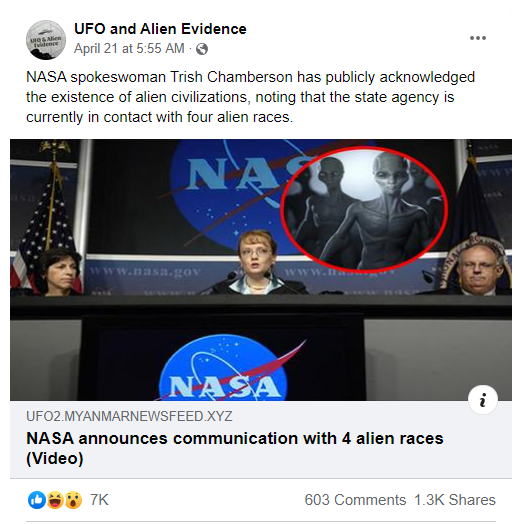 Lead Stories was unable to identify the creator of the website that posted the claim, ufo2.myanmarnewsfeed.xyz, but according to our research it appears to be based in Vietnam and is related to a UFO and Alien Evidence Facebook page.

A video accompanying the text of the article is credited to MATRIX WORLD DISCLOSURE, a YouTube channel that says it aims to "reveal many secrets" about "UFO [sic], unexplained mysteries, conspiracy theories ..." and other similar topics.

However, the video with the claim does not include the NASA officials' photo in the article or make any specific mention of the claim.

In an email to Lead Stories on April 25, 2022, Allard Beutel, a news chief in NASA's Office of Communications, said that while one of NASA's key goals is the search for life in the universe beyond Earth:

There is no truth to this claim, and we do not have a spokesperson named Trish Chamberson. To date, NASA has yet to find any credible evidence of extraterrestrial life.

A Yandex reverse image search revealed that the woman in the 2007 image depicted in this article is Shana Dale. Beutel confirmed she was NASA's deputy administrator at the time. To her left is Ellen Ochoa, then-director of flight crew operations, and to her right is Dr. Richard S. Williams, then-chief health and medical officer. The photo shows them discussing reviews on astronaut medical and behavioral health assessments on July 27, 2007, at NASA headquarters in Washington.

The claim in this article is recycled from this August 26, 2016, Waterford Whispers News (WWN) article titled, "NASA Admits It Has Known About Alien Life For Years, Just Forgot To Mention It." It has the same image of Dale and colleagues as in 2007. A disclaimer on the WWN website reads:

Lead Stories has previously debunked WWN articles. Those stories can be found here.