Did Ukrainian soldiers prepare a poseable dummy with tape to use in the production of war propaganda, to fabricate a death with a fake corpse in order to "blame Putin"? No, that's not true: This behind-the-scenes video shows a prop dummy being prepared for a scene that would show a human figure falling from a tall building. After the clip was broadcast by Russian State TV network Rossiya-24 with a misleading narrative, the second director of the TV series production posted on their social media explaining that this clip was taken out of context and a false story applied to it. They shared additional photos and videos on their social media accounts of the stunt dummy, nicknamed "Albertik," and the set where the scene was filmed on March 20, 2022, in Vsevolozhsk, a city on the outskirts of Saint Petersburg, Russia.

The behind-the-scenes video was posted to Telegram on April 6, 2022, (archived here), by the account @Ukr_G_M, with a red watermark of that account. The post was captioned in Russian:

Translated to English by Google:

This is how the Armed Forces of Ukraine prepare their staged videos in order to shout at the top of their lungs: 'Putin is to blame,' and then, as in Bucha, these toys will be scattered along the streets of Kyiv or Nikolaev.

This is how that post appeared at the time of writing: 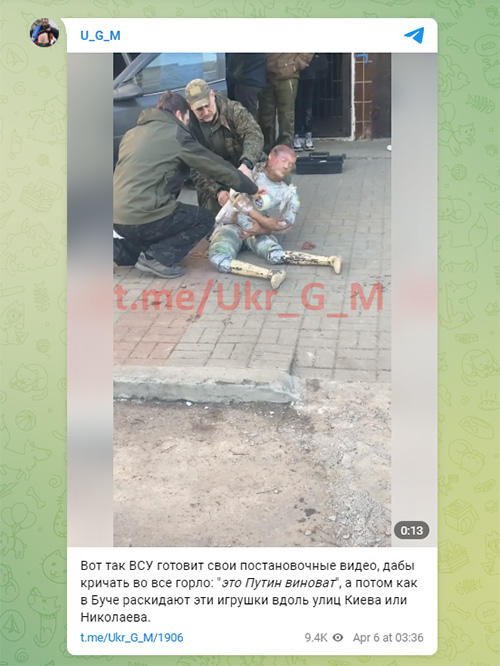 This video clip with the red watermark was broadcast on the Russian State Television channel Russia-24. In response to this, on April 7, 2022, Nadezhda Kolobaeva, the second director of the production (this role is similar to the first assistant director in Western film production) posted on Facebook. Along with a screenshot of the Russia-24 broadcast, her caption (translated by Google to English) was laced with profanity:

Recently, on 'Russia-24' they decided to 'expose' Ukrainian fakes. So what the fuck do you think ? They said on the air that 'two Ukrainians in military uniforms wrap the mannequin with tape to later turn it into a corpse.' And here we were filming a falling from the window in Vsevolozhsk for our TV series on March 20, and here is our stunt performer with an assistant preparing Albertik for shooting! Fucks, what kind of whores you are. 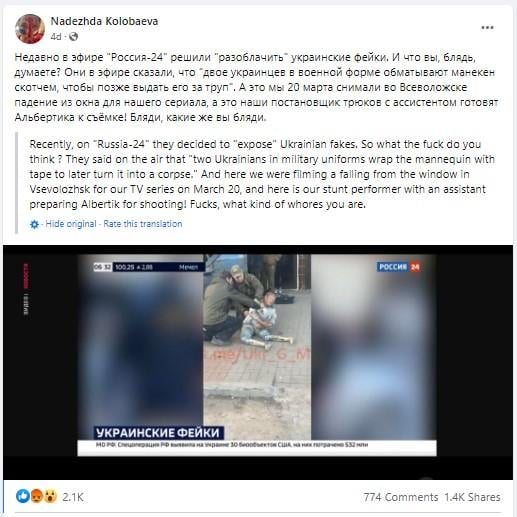 Kolobaeva posted several times on Facebook and on Instagram on this topic and included photos and videos of many angles of the behind-the-scenes of the production. In an April 10, 2022, Facebook post, she identified the filming location as 10 Leningradskaya street in Vsevolozhsk. Her post included scenes with a stabilized man-lift truck for the stunt crew to drop the dummy from a height of about six stories, as well as four picnic tables where the crew could have a coffee break. Below is a Lead Stories composite image comparing the street-view images of the address to a behind-the-scenes still from the dummy drop video posted by Kolobaeva. 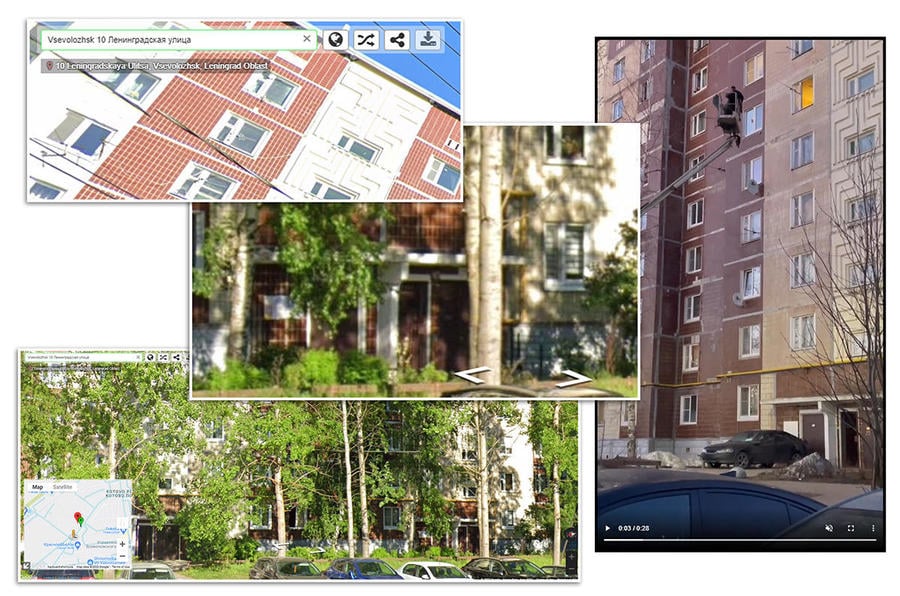 The misrepresentation of this behind-the-scenes video clip has been debunked in articles in many languages, and the Russia-24 news broadcast featuring the video clip was taken down. A copy of the Russia-24 broadcast was posted on Telegram by the account @romasuperromasuper. His caption, translated here to English, explains the real source of the behind-the-scenes video:

On the channel 'Russia-24' on the air at 6:30 in the morning, this format was released. The presenter tells the viewers about how the Ukrainian military is preparing their fakes in order to use these footage against the Russian state in the West.

On the Russia-24 channel, they told me that neither the director's nor the editorial team 'knew that this was not Ukraine.' This video was 'brought' to them.

This is how the @romasuperromasuper post appeared on Telegram at the time of writing: 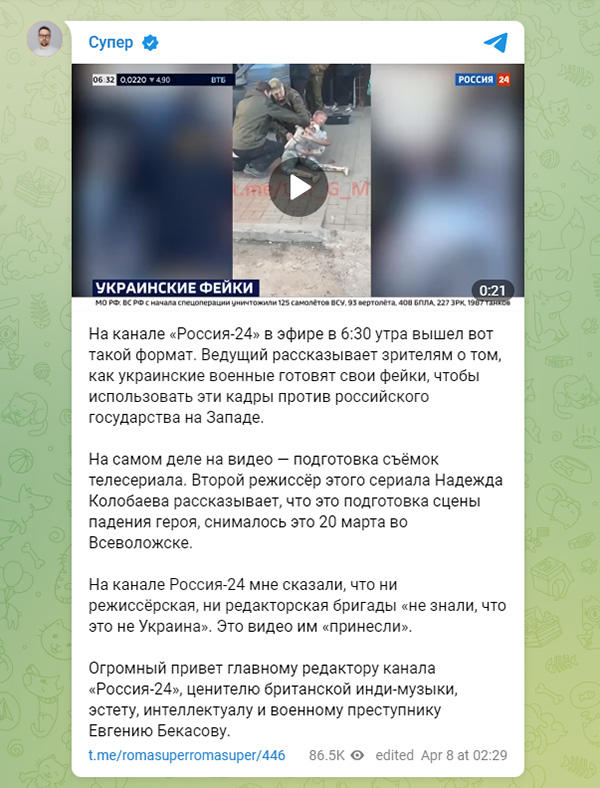 At the time of this writing on April 11, 2022, an April 8, 2022, tweet (archived here) from the Russian Embassy in Spain is still published on Twitter with the caption (translated from Spanish to English):

What are these Ukrainian soldiers doing? And for what? 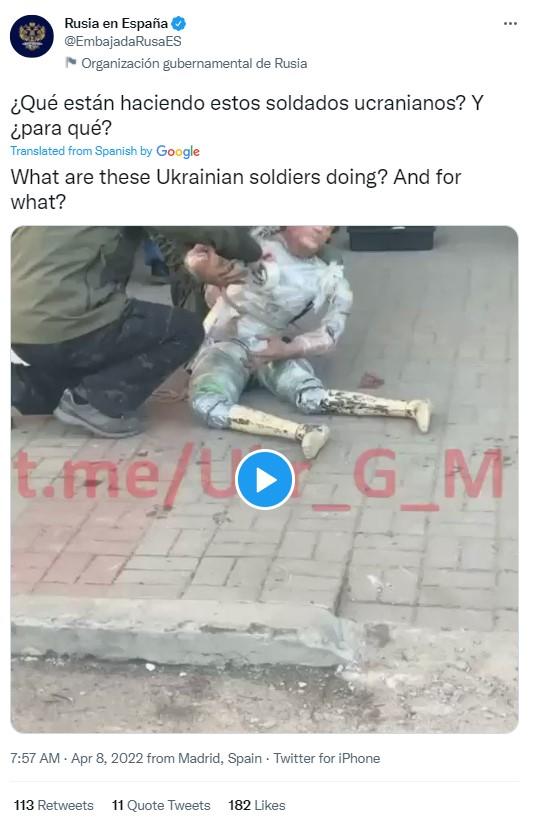