Will Auburn, New York, impose a new law requiring local pet owners to place pants on their cats and dogs starting April 15, 2022? No, that's not true: A spokesperson for the city cited a March 31, 2022, statement from the city council linking such a claim with April Fools' Day. "The letter is fake and should be completely disregarded," the statement said.

The claim appeared in a Facebook post (archived here) on March 30, 2022. Above the photo of a letter that features what appears to be the official seal of the City of Auburn office and an edited-in blue blob where the address would be located beneath this, the caption reads: 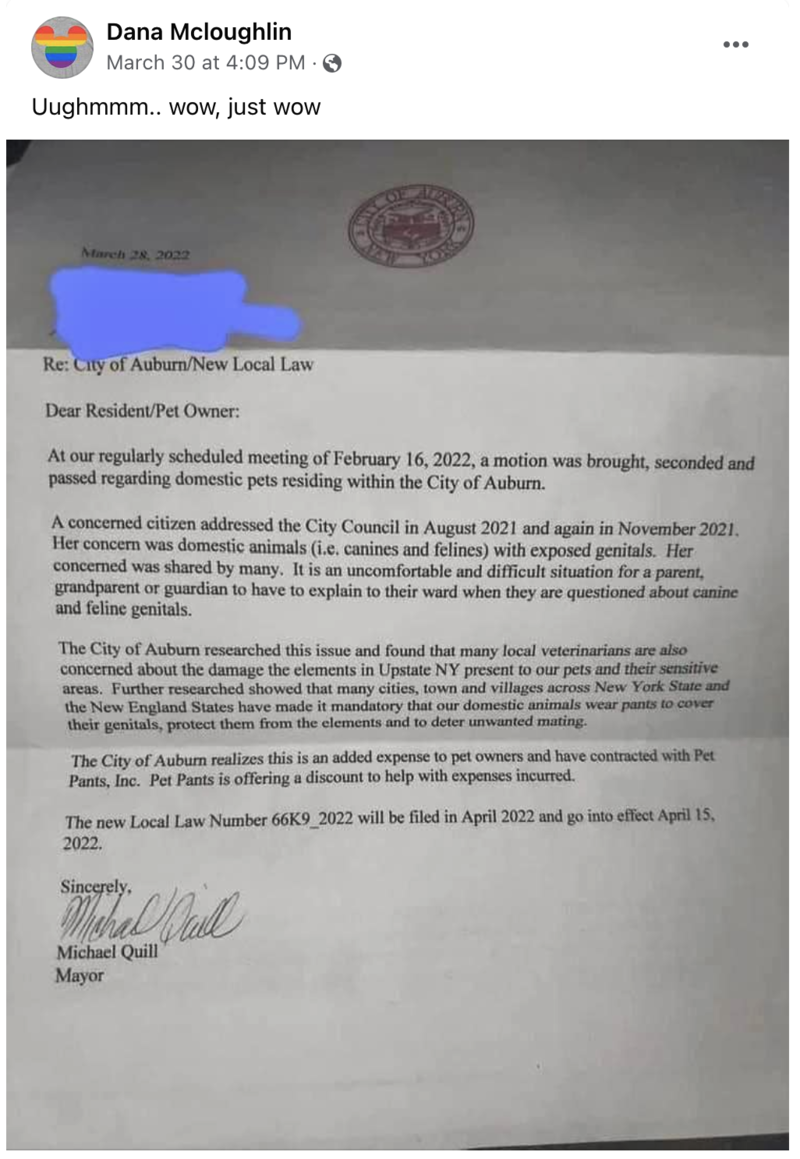 The purported letter told residents their pets would have to wear pants "to cover their genitals, protect them from the elements and to deter unwanted mating."

In an April 11, 2022, email to Lead Stories, Chuck Mason, city clerk for Auburn, shared the contents of a March 31, 2022, statement released by the city council:

April fools day is Friday, however, this week some individuals are circulating a letter on phony City letterhead regarding new local laws that do not exist. The letter is fake and should be completely disregarded.

While we maintain our sense of humor, the City of Auburn does not condone the creation or circulation of false information. The intentional misrepresentation of the law and the forgery of the signature of an elected official are illegal acts and should be taken seriously.

Mason also provided an update on the social media user who initially circulated this claim:

Also, since the incident the person responsible for the letter turned herself in via her own personal lawyer. After meeting with Mayor Quill and Police Chief Slayton it was determined by the Mayor that no charges will be filed against the individual responsible and the city will agree to maintain her anonymity. The City of Auburn would like to remind the public that the use of the city seal is exclusively used for official City of Auburn business only. Also, forgery of the signature of an elected official is an illegal act and simply should not be done.

This March 31, 2022, Finger Lakes Daily News article, "Fake News: Auburn Pet Owners Do Not Have to Buy Pants for Dogs, Cats," includes recorded snippets of Mayor Michael Quill denying the claims made in the letter.