Did something big, an asteroid or a missile, crash into the moon or explode and blow right through it -- and was this event caught on camera in both Texas and California as it happened? No, none of that's true: These two videos were originally posted on TikTok and YouTube in 2020 and 2021 by VFX (visual effects) hobbyist Greg Pietrantonio. His channels feature videos of things hitting the moon as well as extreme weather and farcical astronomical events. The down-to-earth part of the videos have been edited to introduce the unbelievable and are further enhanced with a collection of recurring sound effects.

The two videos were originally posted on TikTok -- "Moon Emergency" on September 5, 2020, and "Wait for it. Orlando, FL." on May 15, 2021. Pietrantonio's videos have been reproduced by many other channels over time but recently were republished on TikTok without credit by Craziest Vids @wtfvidtok.

First, each video was posted individually, on March 28, 2022, and March 30, 2022, and then the two videos together, marked Texas and California and watermarked "WTFVIDTOK," were posted on April 6, 2022, with the hashtags, "#VFX #wtf #fyp." Pietrantonio's original sound was now marked "original sound - Craziest Vids." The @wtfvidtok side-by-side edition was reposted on Facebook on April 11, 2022, with this caption:

Everyone been so focused on Wiil & Jada, Ukraine & Russia. That we missed the event of what happened to the moon on March 4th, 2022. Don't believe Google it. The question is what the hell is the government up to?? I'm pretty sure this wasn't NO ACCIDENT. They distracting and hiding something. I'm pretty sure that wasn't no 'ROCKET' I mean it is but a rocket missiel. The 'ROCKET' went through. 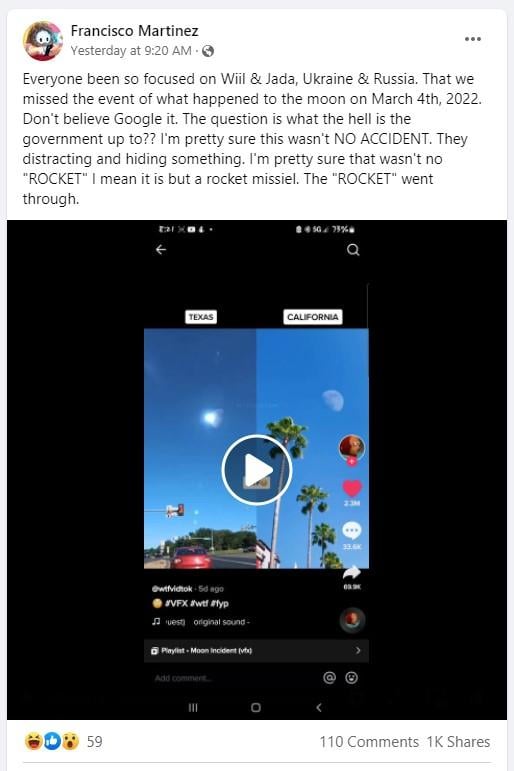 There are practical cues that demonstrate that this scene of something crashing into the moon is not a real video and was not captured simultaneously in Texas and California. There is little point in describing the scientific particulars when we can refer to the account where the fabricated videos originated.

Below is a screenshot of the homepage thumbnails of Pietrantonio's VFX creations at the @gmoney1289 TikTok account. 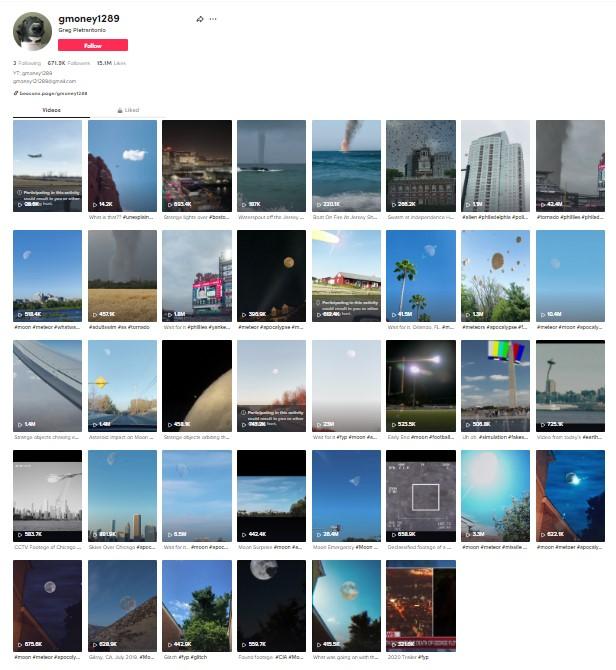 This is not the only creative VFX edit by Pietrantonio that has gone viral. In July 2021 an edited video of a tornado passing by the Phillies ballpark was shared by many people who thought it was real. Without the context of all the other creative VFX calamities posted on the channel it wasn't clear it was a fictional scene. The backstory was explained in a July 8, 2021, article by Snopes.com titled, "Did a Tornado Pass by a Philadelphia Phillies Game in 2021?" Snopes wrote:

In an email, Pietrantonio told Snopes the 'Phillies tornado' clip was 'the result of some VFX and video editing using Adobe After Effects.' Pietrantonio, who lives in Bucks County, Pennsylvania, said he filmed the raw footage of Citizens Bank Park himself while attending a Phillies game, and added the special effects later.

He told Snopes video editing was a hobby with no connection to his career, but had garnered him an audience on TikTok, where his videos have been viewed many millions of times, and he has more than 500,000 followers.

Lead Stories reached out by email to Pietrantonio for comment and will update this article if appropriate.