Did King Township in Ontario, Canada, install new electric vehicle charging stations that are powered with a diesel generator? No, that's not true: A communications officer with King Township informed Lead Stories the generator that appears in the photo does not run on diesel, but natural gas. It is the back-up power supply for a critical piece of township infrastructure and has no connection to the electric vehicle (EV) charging station.

The original tweet by Seamus O'Regan Jr. was posted on Twitter on March 8, 2021. O'Regan is Canadian minister of labour and the member of Parliament for St. John's South-Mount Pearl. A screenshot of a quote tweet responding to O'Regan appeared in a post (archived here) published by the Facebook page Proud To Be Canadian on May 7, 2022. The screenshot shows a response by James M to a tweet by Seamus O'Regan Jr. It said:

James M @jmclennan8
Hey Seamus what's that big black thing with a fence around it in the background. That's not a Diesel Generator is it??!!! 🤣😂🤣😂 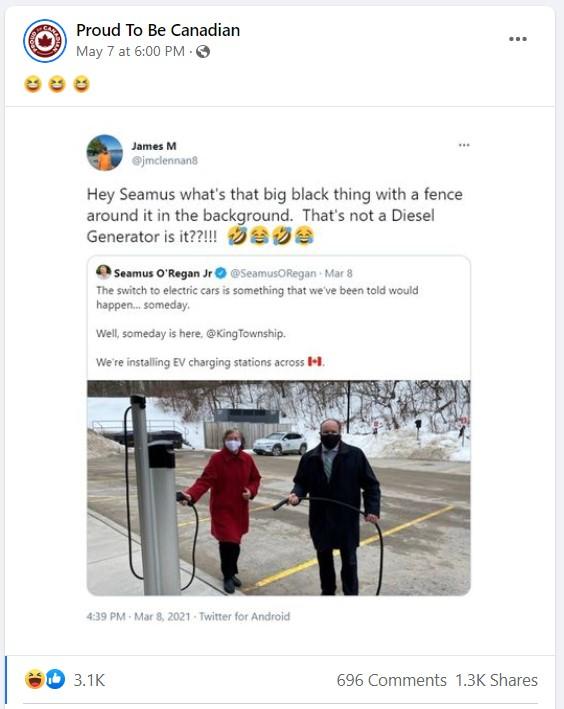 King Township's network of electric vehicle (EV) charging stations is about to get a jolt thanks to a grant from the federal government.

King has secured a $200,000 grant from the Ministry of Natural Resources which, when added to the Township's $300,000 contribution, will allow for the installation of between 10 and 12 electric vehicle charging stations throughout the Township amounting to over 20 charging connectors.

Lead Stories reached out to King Township to ask about the generator visible in the photo with the charging station. Communications officer Jason Ballantyne responded by email on May 9, 2022. He said:

The dark box in the background of the photo you are inquiring about is a natural gas generator used to support a critical piece of Township infrastructure in the event of a power outage.

It has no connection to the EV charging station.