Do U.S. government laws say no American can own a house or car and that all children are wards of the state? No, that's not true: According to Jeff Feldman, professor of practice at the University of Washington Law School, individuals or entities can own real property that the government does not own. Scott C. Idleman, a professor at Marquette University Law School, noted, "individuals marry each other, not the government."

The claim appeared in a Facebook post on April 5, 2022, under the title "So you think you 'own' those items your using..." Both the voiceover and text of the video start:

Hence we can never own any property because the

State holds Title to it all. We only rent our homes that we

think we own. We only have a Certificate of title to the

'motor vehicle' we think we own, which certifies that its

Title is owned by the State. 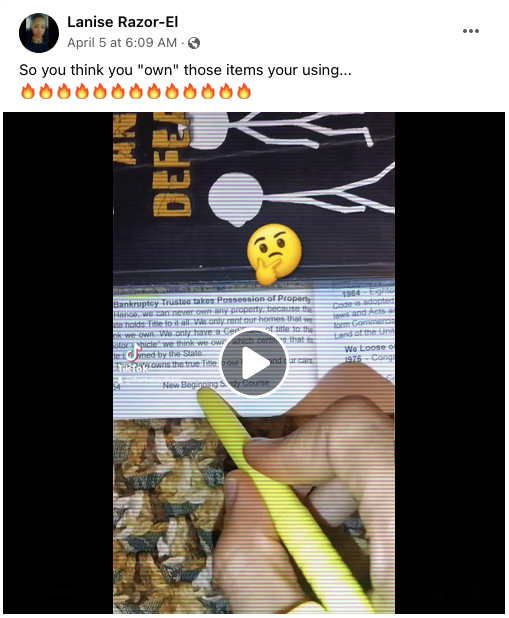 All of these statements are incorrect.

States have established systems for keeping track of who owns real property by establishing Recorder's Offices or Registries of Deeds (their names vary from state to state). But they all serve the same purpose, which is to maintain records of who owns real property. Maintaining that system avoids property ownership disputes and it also makes it easier for taxing authorities to bill the right person for real estate taxes they may be due. But recording your deed with the Recorder's Office of Registry of Deeds does not, in any respect, convey title to the state.

The same is true for cars, he says

Neither obtaining a vehicle title or registering the vehicle has the effect of giving the state any interest in or title to the vehicle.

As for this part of the claim:

You married the State via your Marriage license and

your children are Wards of the State. You are a Ward

of the State, too.

You don't have to be legally married. You can have a religious ceremony or no ceremony at all and call yourself whatever you want. But if you want the state to recognize your marriage legally, you have to comply with the legal requirements. Doing so, in no way, though, 'marries' you to the state. And for all the same reasons, it doesn't make your children wards of the state.

... as for one's children, they are your children (you being a parent or guardian with legal custody) and the state can only take custody (usually temporary) if you truly haven't provided or cannot provide for the minimal needs - e.g., food, shelter, safety - of your children. And even then, the government will try to place them with another foster parent or family rather than keep them as wards of the state.

Idleman also clarified that the government does not own your private property such as a house or car:

Title is a guarantee from the government that it will enforce your property rights, particularly against trespassers and others who violate those rights. It is not a retention of ownership by the government. It is true that (1) if you die without a will and no heirs, then your property could revert to the state (and then be sold to another private party), and (2) the government can use eminent domain to take property for public use (e.g., a highway project) but the Constitution requires that you be given just compensation.

Lastly, the claim mentions "the Secretary of the Treasury of the UNITED STATES, INC." There is no such entity. The United States is not a corporation. Lead Stories has debunked this many times. Some examples can be found here and here.