Tennessee just banned Plan B and made it a crime punishable by a $50,000 fine to order it.

Abortion-inducing pills are not the same as emergency contraceptive pills such as Plan B: The former is used to terminate a pregnancy, while the latter is used to prevent pregnancy.

There is no legislation in Tennessee that bans emergency contraceptive pills at the time of writing. Tennessee Gov. Bill Lee signed House Bill 2416 into law on May 5, 2022. According to the bill's summary, the bill adds new provisions about the prescription and providing of abortion-inducing drugs to patients, and criminalizes the actions of health professionals who fail to comply with those provisions. If convicted, those health professionals could be fined up to $50,000 and imprisoned for up to 20 years.

The text of HB2614 does not mention "contraceptive," "Plan B," "morning-after" or "birth control."

Similar claims were made on Facebook and Twitter about Missouri. A screenshot of the tweet linked in this fact check and posted on May 9, 2022, is below: 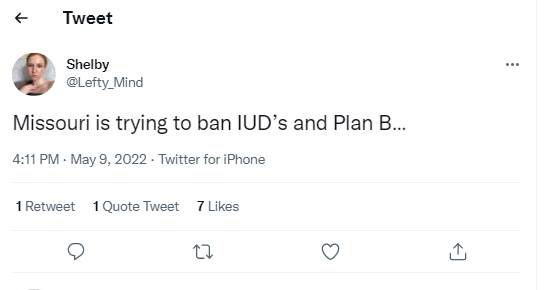 Missouri organizations that support abortion rights such as Planned Parenthood of the St. Louis Region & Southwest Missouri and Pro-Choice Missouri debunked the claim, clarifying that if the landmark Supreme Court decision Roe v. Wade is overturned, Missouri's abortion "trigger law" would go into effect, blocking only abortion access in the state. This does not affect birth control, an umbrella term that includes emergency contraceptive pills and IUDs.

Tennessee is another one of the 13 states with an abortion "trigger law."

Other Lead Stories fact checks related to abortion can be found here.