The small amount of chlorine in tap water oxidizes with whatever is on the surface of the berry and can produce several chlorine disinfection byproducts (DBP). The test drops that turn the water yellow if chlorine is present do not react with DBPs. This demonstration does not show that chlorine has been absorbed or adsorbed by the berry.

Demonstrations similar to this have been used in sales pitches for various water treatment systems for years. In a 2009 video posted on YouTube a salesman puts his hand in a glass of water and claims that all the chlorine has been absorbed by his skin; another video uses carrots. This video using strawberries was posted on Facebook on April 19, 2022, by Rick Fleming, a "hydration specialist" with Kangen Water, a brand of "alkalized, ionized water." The post was captioned:

Hey where do you think the chlorine went? Absorbed into the strawberries! Disgusting, no thanks! Wash them in 11.5ph, so you don't ingest chlorine, pesticides and herbacides! #fypシ #stayhydrated #kangenwater #mywaterworks

This fact check is not about the Kangen Water treatment product, or any claims about chlorine beyond the one in the video, which is that the strawberries absorbed all the chlorine from the tap water in the glass. The video begins with a mention of a link between chlorine and cancer, which is not the subject of this fact check, but is addressed briefly.

The narrator of the video says:

Near the end of the video, at the 30-second point, a text caption says:

The U.S. Department of Agriculture Food Safety and Inspection Service has published guidelines in a fact sheet titled, "Washing Food: Does it Promote Food Safety?" The agency does not advise soaking produce in a cup or bowl of water, but washing the produce under running tap water:

Before eating or preparing fresh fruits and vegetables, wash the produce under running tap water to remove any lingering dirt. This reduces any germs that may be present. If the fruits or vegetables have a firm surface, such as apples or potatoes, they can be scrubbed with a brush. Consumers should not wash fruits and vegetables with detergent, soap or commercial produce washes. These products are not approved or labeled by the U.S. Food and Drug Administration (FDA) for use on foods. You could ingest residues from soap or detergent absorbed on the produce and get sick.

Lead Stories contacted Trevor V. Suslow, an extension research specialist at the University of California, Davis, to ask about what this demonstration is showing. One part of our question was about "chlorine demand," mentioned in the healthy water fact sheet about testing chlorine in drinking water from the Centers for Disease Control and Prevention. Suslow replied by email on May 3, 2022, explaining:

The CDC info sheet explains, tap water has a very small amount of free or combined chlorine for safety (USEPA safe drinking water levels) and this limited residual reacts quickly with trace soil and organic molecules on the strawberries, as it should, and may form combined chlorine which would not react with the drops forming the yellow color.
The trace chlorine in tap water would react quickly with the green calyx (cap) tissue alone. There is no evidence that this reacted chlorine is absorbed or adsorbed by the berries or other produce. The reaction products, mostly chloramines, chlorates and some trihalomethanes, depending what is on the surface or cut surfaces of strawberries or other produce, have been shown in repeated studies to be extremely low even in situations far more egregious than this scare tactic demo. Studies conducted recently at Stanford have shown negligible uptake by produce in worse conditions.
Chlorine oxidizes whatever it can on the berry surface or released into the water from the berry... including common fruit colonizing bacteria naturally present and not a food safety risk.

Suslow also added context to the question of cancer, touched on in the video introduction:

Chlorine disinfection byproducts (DBP) ... such as the trihalomethanes I mentioned... have been associated with known or suspected elevated risk of certain forms of cancer. No question. But these are at very high levels associated with treatments of water with a high organic load. This is not the type of DBP reactants created in drinking water from your tap. In some areas, especially during the summer, treatments to protect water to consumers in the distribution will have a slightly elevated level of stable chloramine which gives the off-flavor and home water purification systems may be helpful.

Lead Stories conducted our own produce and tap water chlorine test with grapes, strawberries and mushrooms. We did not have access to the same test drops used in the video demonstration and used pool and spa test strips instead. Our test produced a similar result as the demonstration in the video. The plain tap water turned the chlorine-sensitive square, the first square on the strip, a light pink -- indicating there was free chlorine in the tap water. The tap water that had the produce sitting in it for one minute did not register any free chlorine on the test strip. 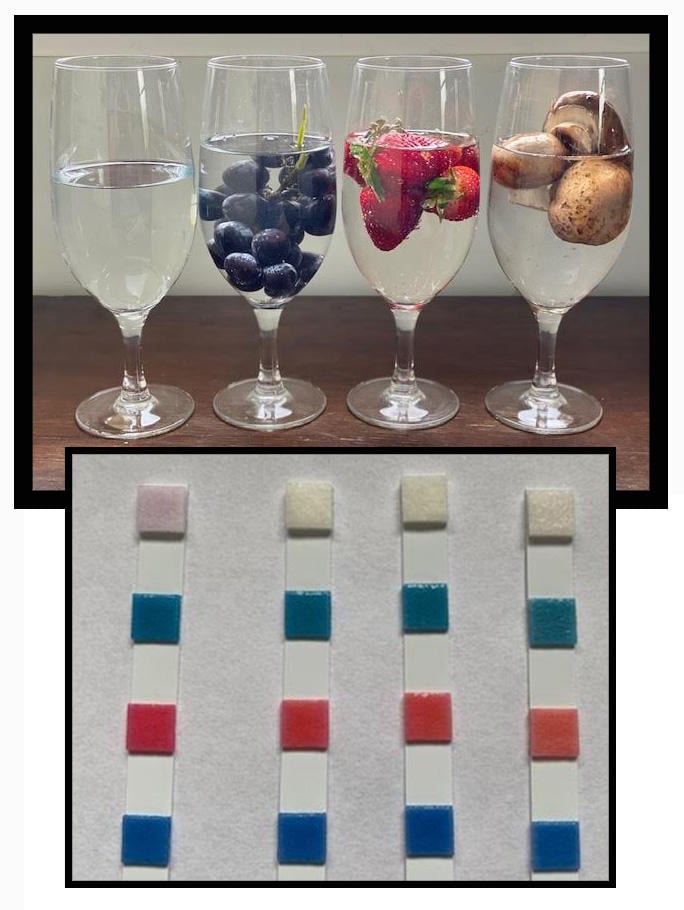