Is Bill Gates the "first man to bring computers into this world," and is he worth "trillions and trillions"? No, that's not true: A social media video post purporting to be sharing "the truth about Bill Gates" makes those claim but offers no proof for them or any of the many other claims the narrator makes about Gates or various entities. British mechanical engineer Charles Babbage is credited with the concept of the first automatic digital computer in the 1800s. Alan Turing is known as the designer of the computer in the 1930s. And according to Forbes, Gates was worth $122.4 billion as of June 15, 2022.

The claims appeared in a video posted on Facebook on May 26, 2022, under the title "THE BIGGEST INTRODUCTION IN GLOBAL HISTORY WAS HELD IN 1980." The video opened: 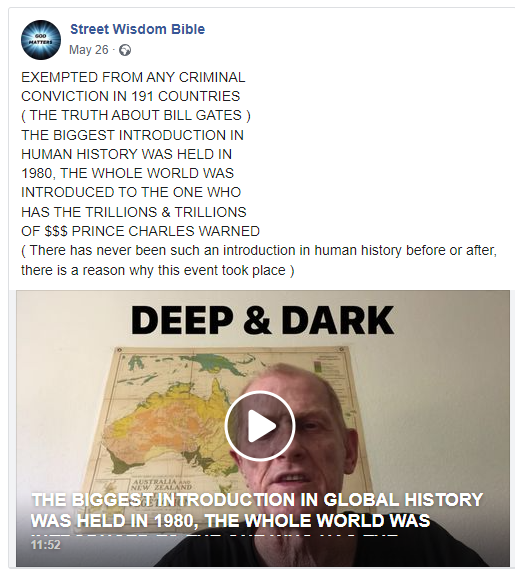 The rambling 11:52 video was posted on a Facebook page created in May 2022. The About section on the page notes, "saying [sic] humanity from the human condition." The unidentified man narrating the video claims, "What you're about to learn is going to blow your mind away," and warns that since Gates became famous people have been brainwashed and are unaware of reality. "From that moment nearly everything you know about life has been manipulated and turned inside upside down and you don't even know it," he says. "... You're asleep. Deep asleep into the system you believe in so much."

There are several false accusations made in the video as well, and no evidence is provided.

The headline claims, "BIGGEST INTRODUCTION IN GLOBAL HISTORY WAS HELD IN 1980," and at 1:38 in the video the unidentified narrator claims that was the year it was announced that Gates was the richest man in the world. That is false. Gates became a billionaire in 1987 but didn't become the richest man in the United States until 1992.

At 3:24 in the video the man talks about Gates, saying he is "the first man to bring computers into this world, OK. The first man to take us from microfiche and a manual system to an automatic system that you're dealing with today."

Babbage is known as "The Father of Computing," developing the Difference Engine No. 1, the first successful automatic calculator in the 1830s, according to the University of Minnesota Charles Babbage Institute. In 1936, British mathematician Turing "invented the universal Turing machine, an abstract computing machine that encapsulates the fundamental logical principles of the digital computer," according to Encyclopedia Britannica.

The video warns about the World Bank, implying that it could have something to do with Gates and his world domination, but offers no evidence of Gates controlling the banks. At 3:54 the narrator says:

I want you to know something. ... Worldbank.org is the one you don't know much about. The richest bank in the world. That the whole financial forum runs from. ... Fully protected by every government in the world. Never to be prosecuted for any reason whatsoever. With full exemption. ... With the richest man in the world. Worth trillions and trillions of dollars.

This is false. According to the LexisNexis ranking, the top bank in the world is the Industrial & Commercial Bank of China Limited, not the World Bank. There is no evidence or proof shown in the video that Gates or the World Bank are exempt from prosecution or fully protected by every government in the world.

John Malone, a former media tycoon, is the largest private landowner in the United States, according to Go Banking Rates in 2021.

Gates does own the largest portfolio of private farmland in the United States, The Land Report reported, but he is not the largest landowner anywhere.

100 years ago more than 80 percent of the population never believed in the system of the government. They stood against them. Today 95 percent of people believe in the system.

He offers no context for the claim -- no mention of what or where the population is and what system they believed in -- and no proof of the statistics cited.