Did responding police officers and emergency medical personnel in North Georgia die because of exposure to fentanyl? No, that's not true: Two Gilmer County sheriff's deputies and five Gilmer County emergency medical service personnel were treated -- and released from the hospital -- after exposure to "an unknown controlled substance" at the scene of a single-vehicle crash, according to a May 20, 2022, press release from Gilmer County Public Safety. There were no deaths among the county personnel.

omg did y'all hear abt that shit with the fentanyl? someone laced the air with fentanyl & a call was made to 911 and everyone
including the responding officers and emts died bc of the fentanyl in the air... this all happened in North Georgia and we haven't heard nothing bout it on the news

Local news reports detailed an incident in May 2022 that injured officers and EMTs in Gilmer County, Georgia.

Lead Stories reached out to the Gilmer County sheriff's office. Melissa Waddell, a public information officer, replied in an email on June 7, 2022, referring to a press release put out by the county's public safety department. She wrote:

As you can see, it clearly states that all 7 public safety personnel were treated and released from the hospital, which debunks this incorrect info. on FB. 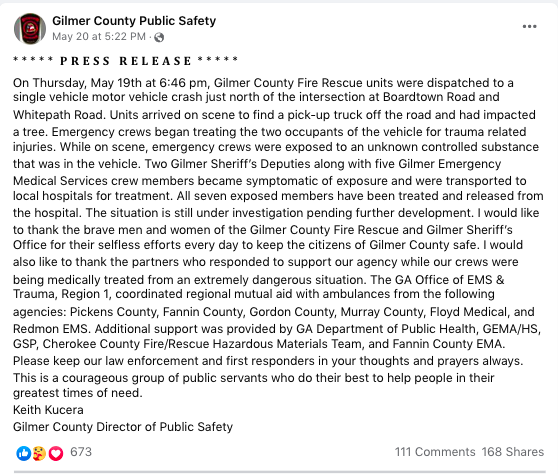