Was Dominion voting machine "manipulation" responsible for 2022 primary election problems In DeKalb County, Georgia? No, that's not true: The Georgia secretary of state's office says it was a mistake in programming the machines for a single countywide seat on the Democratic side of the ticket, not in the machines themselves.

Ladies and gentlemen, what I'm about to share with you guys is hot off the press and this is one of the most explosive stories on election fraud that's occurred in the last year. What we have is clear definitive proof of machine manipulation by the Dominion machines in DeKalb County, Georgia. 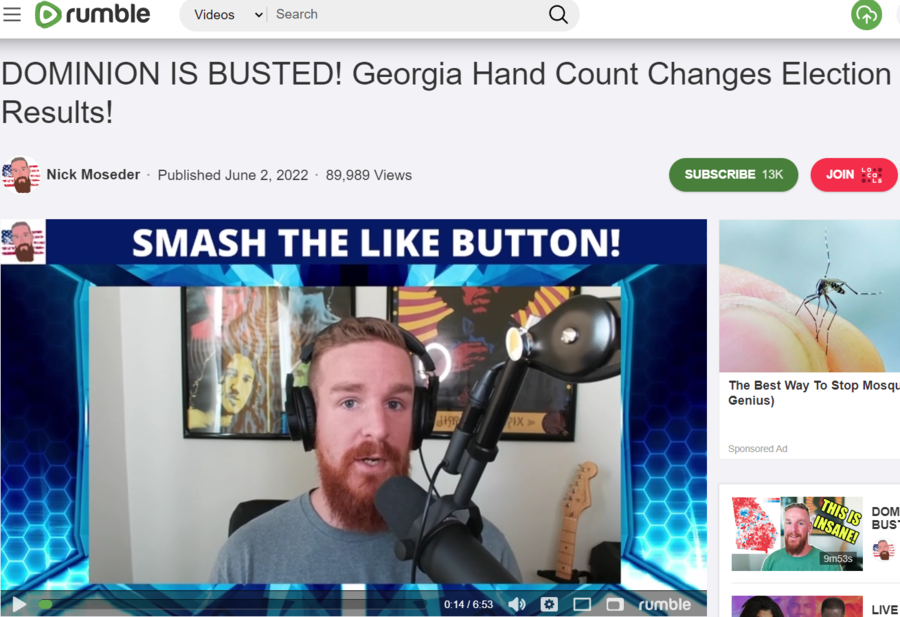 The second half of the headline for the video is accurate. The hand count of the Democratic primary for the District 2 seat on the DeKalb County Board of Commissioners did change the election results, but no manipulation of the Dominion voting machine was involved. A June 3, 2022, news release from the Georgia secretary of state's office explains why the initial count for the May 24, 2022, vote wasn't right, to begin with:

Due to an unfortunate series of events starting with census delays, late districting changes by the DeKalb delegation in the legislature, redistricting issues leading to the need for a dual election project, and a candidate withdrawing, DeKalb County had to revert to a hand count to ensure accurate results in the County Commission District 2 race. The issue necessitating the hand count should have been caught by earlier checks in the process, but it was not. However, it was caught as soon as election returns started to come in. In fact, it was glaringly obvious. This is a sign that the system of multiple checks and balances works. The Secretary of State's office is conducting a full investigation and after-action report to ensure these types of mistakes do not occur in the future. We commend the DeKalb County Board of Elections and Registration for resolving the matter and ensuring accurate results.

In a June 7, 2022, email to Lead Stories, Walter Jones with the secretary of state's office said the Dominion Voting System did its job, but there were technical errors at the state level:

Someone made a mistake in programming. The machines worked fine.

The initial count shortchanged candidate Michelle Long Spears by more than 3,500 votes, leaving her in third place. A pair of tweets from the candidate illustrate how the results of the hand count propelled her from third to first and into the runoff to select the Democratic candidate for the commission seat.

(2/3) We sounded the alarm with the Board of Elections, and a hand recount finished earlier this week.
While the results aren't certified, we know our campaign is the frontrunner in this race and that we are headed to a runoff on June 21 (less than 3 weeks away). pic.twitter.com/SJU71Ndxd0

DeKalb County's ability to quickly identify a discrepancy with their election results is evidence that Georgia's election system works and is secure. Thanks to our state's verifiable paper-based system, DeKalb County has ensured that the results they certified are accurate and reflect the will of their voters.

The press release from the secretary of state's office goes on in greater detail to explain the programming errors that resulted in the hand count:

During routine post-election checks and balances prior to certification, a technical error in the precinct scanners that affected the DeKalb County Commission District 2 race was discovered. DeKalb County Commission District 2 is the only race affected by the error. The Secretary of State's Office and DeKalb County Election and Registration have been in constant contact to remediate this issue once it was discovered and ensure that all votes are properly counted. Through a unique series of events detailed below, a mistake in programming for one candidate's withdrawal in the precinct scanner led to inaccurate vote counts for two candidates. The multiple layers of checks and balances built into Georgia's election system and the fact that all votes are recorded on paper ballots that can be recounted allowed this issue to be detected and a resolution identified. The Secretary of State's office commends the Dekalb County Elections and Registrations team for their diligence in detecting and resolving this issue prior to certification of their results.

Initially, four candidates qualified to run for District 2 Commissioner. After the election project had been built and the equipment had been prepared, one candidate withdrew. That candidate was marked as 'disabled' in the Election Management Server, which is proper procedure. Subsequent to that, it was discovered that five precincts in DeKalb were redistricted into County Commission District 2 race, but those precincts had not been updated to reflect that change. To remedy that, a new election project was created so that the County Commission District 2 race properly appeared on the ballots for those precincts. ​That new election project was built by Secretary of State's Center for Election Systems and was configured with 4 candidates within the County Commission District 2 race as had been done in the original project. On the first day of early voting, an issue was discovered on the BMDs [ballot marking device] that the text of one Republican party question was not properly appearing. To remedy this issue, the Secretary of State's Center for Election Systems updated the election project so that the text properly appeared. However, that update was built us​ing the county maintained copy of the election project where the withdrawn candidate had been placed into the disabled status. In making that update, it caused a discrepancy on Election Day between the BMDs (with the updated project showing three candidates) and the Election Day scanners in the other precincts in the county (that were expecting four candidates in that race). The issue was quickly detected by DeKalb County Elections and Registrations after the election during their normal post-election processes, and the Secretary of State's office has worked with DeKalb to help resolve the issue.