Did someone "torch" one of the largest egg factories in the United States on May 28, 2022? And is this incident connected to an "outbreak" of fires at similar facilities across the country in the past six months? No, those rumors are not grounded in facts: The Minnesota state fire marshal's office finished its investigation of the fire at Forsman Farms in Howard Lake without having determined the cause of the fire.

There is insufficient physical evidence to support an accidental or incendiary cause. There is also no publicly available evidence that connects this incident to previous fires at food processing plants. Posts on social media claim a number of such recent fires across the United States were intentional and were connected. Without any evidence of foul play, the fire at Forsman Farms was added to the top of the list.

One Of The Largest Egg Factories In US Torched In The Middle Of The Night, Amid Outbreak Of Fires In Food Processing Facilities Across The Nation In Wright County Egg Farm Fire in Minnesota
That makes 20 food plants in 6months already..
Somebody is continue to infiltrate and destroy our food supplies and processing plants.
The dismantling of America. Right before your eyes.
Start preparing.. you've no idea what is coming before it's too late. 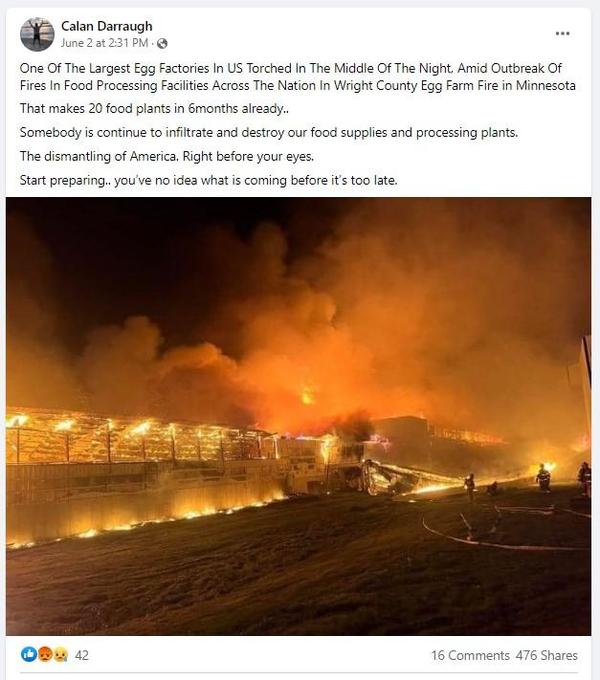 This fire did not halt operations at the Howard Lake farm where the blaze occurred, and they have five additional facilities in the Midwest. The Wright County sheriff's office gave an early estimate that about 200,000 chickens were killed in the fire.

The post claims that Forsman Farm is one of the "largest egg factories in US." Another Facebook post suggests that the fire in one of the Forsman barns destroyed the farm's entire egg production and could impact the nation's egg supply. It's true Forsman Farms is a very large commercial egg producer -- the company website says they sell over 3 million eggs a day -- but they are not near the top of the list of egg farms in terms of the size of their egg laying flock.

In 2021 poultryinternational-digital.com published a list of the 68 largest egg producers in the United States ranked by the number of laying hens. Forsman Farms is No. 32 with 2.6 million hens. The article says, "The market share for the top 20 U.S. egg producers remained virtually unchanged from last year at just less than 73% of the total."

Using the numbers provided by poultryinternational-digital.com, Lead Stories made a bar chart that shows the relative size of the nation's 68 largest egg laying flocks, with an arrow indicating Forsman Farms. 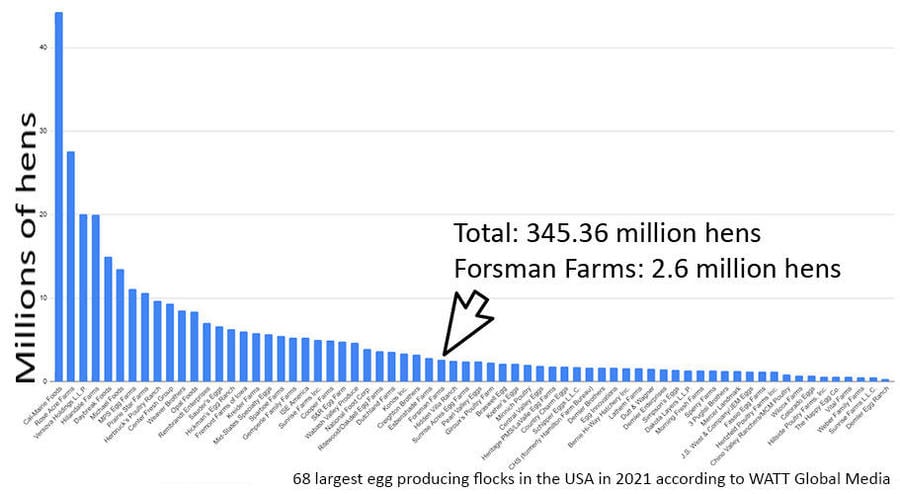 Lead Stories received a copy of the investigation report from the Minnesota State Fire Marshal Division on June 6, 2022. The status of the case was marked "Closed" and the fire cause was marked "Undetermined." The report describes the case background as such:

This case involves the total loss of a poultry egg production facility structure, including the loss of all contained livestock.

Lead Stories reached out to Deputy State Fire Marshal Bruce McLaughlin to find out if there was any evidence suggesting that this fire could have been arson. He said the case is currently inactive and could be reopened for further evaluation at any point in time. An undetermined cause basically means there is insufficient physical evidence to support an accidental or incendiary cause.

The first portion of the caption of this Facebook post originated from a May 30, 2022, article in thegatewaypundit.com with the headline: "One Of The Largest Egg Factories In US Torched In The Middle Of The Night Amid Outbreak Of Fires In Food Processing Facilities Across The Nation."

A barn that housed tens of thousands of chickens on Forsman Farm in Howard Lake, Minnesota, one of the nation's largest egg producers, was set aflame late Saturday night.

According to Forsman Farms, which provides more than three million eggs to the largest retailers in the country, the cause of the fire remains a mystery as investigators evaluate the scene to determine how the barn was set ablaze.

Although the article was written before the state fire marshal's investigation was finished, and relays that Forsman Farms said the cause of the fire remains a mystery, the article and its headline said the building was "torched" and "set aflame" -- language suggesting arson even though there was no evidence of that at the time or at the conclusion of the investigation.

Lead Stories also reached out to the National Fire Protection Association. On June 7, 2022, Communications Administrator Peg O'Brien answered our email, sharing an article recently published on May 2, 2022, in the NFPA Journal titled, "Nothing to See Here -- Recent fires at food processing facilities have some claiming there's more going on than meets the eye. Experts aren't convinced." O'Brien also included these answers to common concerns:

Is there any evidence that the number of fires at U.S. food processing facilities this year is unusual?

There have been approximately 20 fires in U.S. food processing facilities in the first 4 months of 2022, which is not extreme at all and does not signal anything out of the ordinary. The recent inquiries around these fires appears to be a case of people suddenly paying attention to them and being surprised about how often they do occur. But NFPA does not see anything out of the ordinary in these numbers.

How many fires typically occur on average at U.S. food processing facilities per year?

NFPA collects data from the National Fire Incident Reporting System (NFIRS) and our own data sets. These resources do not provide numbers specifical to food processing plants. However, our data does provide annual averages on fires that could be related to these types of facilities. Following are annual averages of fires that have occurred in the U.S. between 2015 and 2019 (source):

Does this rumor demonstrate a general lack of industrial fire safety knowledge among the public?

Overall, fires happen more often than people think. In 2020, there were 490,500 structure fires in the U.S. The 5,308 fires occurring in all manufacturing and processing plants, as noted above, represents 1% of all U.S. fires. Fires that represent less than 2% of the overall fire problem are considered statistically insignificant. As a result, the number of fires for this occupancy classification fall within that category.

Lead Stories has written about claims about fires at food processing plants in the United States and claims that the bird flu is not real and the depopulation of infected flocks is a globalist plot.

Lead Stories reached out to Forsman Farms and will update this article if appropriate.