Did an Australian police officer named "Ed Chenel" detail an increase in that country's homicide rate a year after new gun control laws were introduced? No, that's not true: It's unclear whether Chenel ever existed but statistics from the Australian Institute of Criminology show that the new laws resulted in a lower rate of homicides nationally.

The claim appeared in a Facebook post on June 25, 2015, under the title "Australian Gun Law Update." It opened:

Here's a thought to warm some of your hearts....
From: Ed Chenel, A police officer in Australia
Hi Yanks, I thought you all would like to see the real figures from Down Under.

It has now been 12 months since gun owners in Australia were forced by a new law to surrender 640,381 personal firearms to be destroyed by our own government, a program costing Australia taxpayers more than $500 million dollars. 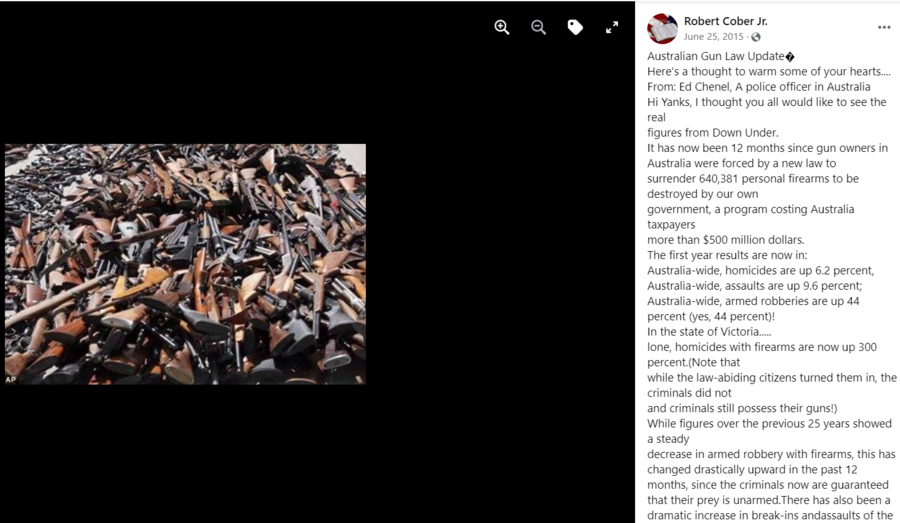 Similar versions of this post have been circulating for more than 20 years. Lead Stories found one purportedly from "Officer Ed Chenel" that dates back to an online forum from August 21, 2001. A version from 2020 can be found here, and a Google search for "Australian Gun Law Update" returns hundreds of examples of the post through the years.

Much more than a year ago

Although the post says it's been "12 months since gun owners in Australia were forced ... to surrender" their personal firearms, it's actually been about 26 years since a firearms buyback program was instituted. Even when this post was published in 2015, it still would have been 19 years earlier. In 1996 former Australian Prime Minister John Howard helped coordinate the National Firearms Agreement. It included a temporary firearms buyback program that purchased about 640,000 weapons between 1996 and 1997, following the Port Arthur Massacre in April 1996 that left 35 people dead. The Facebook post claims to show "first year" crimes statistics from Australia following the firearms agreement, which it said included an increase in homicides: 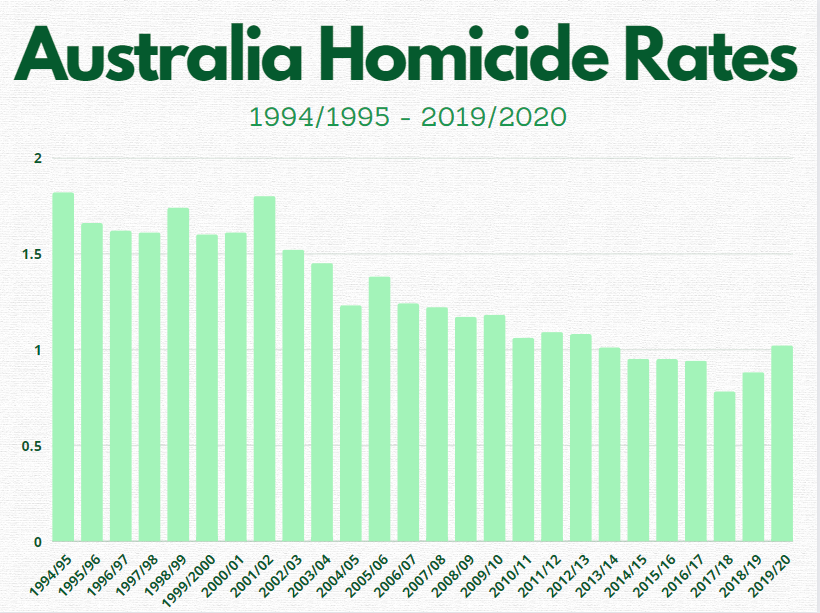 (Source: Created in Canva using data from the Australian Institute of Criminology -- rate per 100,000)

The homicide rate in Australia is quite low compared to the United States, which saw a 30 percent increase in 2020, according to the Pew Research Center, which used Centers for Disease Control and Prevention figures: