Did the Department of Energy (DOE) say Americans buy at least 40 gallons of gas per week? No, that's not true: There is no evidence that the DOE ever published statistics that made this claim, and the 40-gallons-of-gas-per-week claim also does not appear to be accurate.

If you make $15 an hour, you bring home on average, $9 per hour after taxes and insurance. Most people work 40 hours per week, and according to the department of Energy, Americans purchase 40 gallons of gas a week minimum. This means after you pay for gas each week, you bring home $4 an hour. Anyone that makes minimum wage, is only paying for gas, that's it.

The rest of the post alluded to gas prices being a political problem and stated that those who make minimum wage will soon "start to pay to go to work." 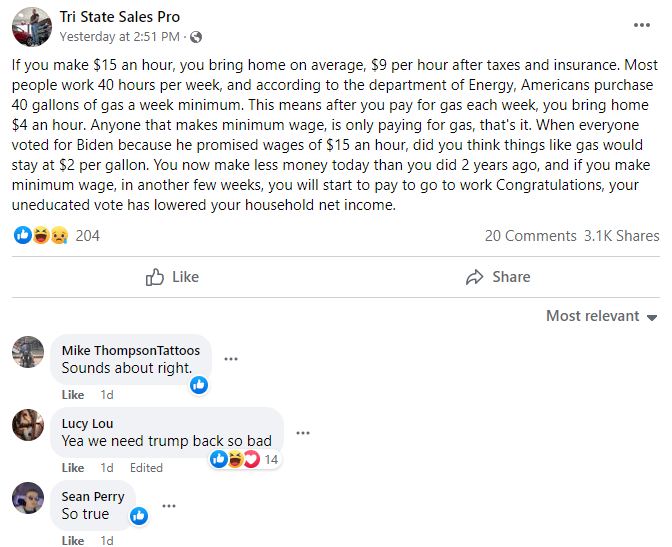 There are reports that, among the high gas prices of 2022, some gas prices have even exceeded the federal minimum wage of $7.25 per hour -- although those gas prices were only reported in California, where the minimum wage is $14 to $15 per hour. However, Lead Stories couldn't find statistics from the DOE that implied or stated that Americans buy "40 gallons of gas a week minimum."

We used Google to search for "Americans purchase 40 gallons of gas a week minimum" and "40 gallons of gas per week Department of Energy" and didn't find results that corroborated the claim. When we searched for the gasoline data in the DOE's dataset catalog, we were mostly led to statistics published by the Energy Information Administration (EIA), which are discussed below. We reached out to the DOE for comment on the claim and will update this story with any response.

Lead Stories contacted the EIA, which is the statistical agency of the DOE, about the claim. The EIA responded to us via email on June 8, 2022. According to EIA data found in its "Prime Supplier" report, U.S. motor gasoline prime supplier sales were 367 million gallons per day in 2019, the latest pre-pandemic year. With a working population of 206 million people in 2019, the gas sales in 2019 would equal 1.8 gallons of gas per person per day or 12.5 gallons of gas per week.

But the EIA cautioned us that its numbers are based on a national average, and that "these numbers will vary considerable by state." Individual numbers for individual drivers will also vary widely. The EIA explained another caveat of its statistics:

Another consideration is that our Prime Supplier Report reflects petroleum product deliveries into a state. That is not the same thing as sales at retail stations. On an annual average basis, it might not be too big of a concern, but it is important to recognize that our data do not fully capture gasoline consumption at the retail level.

In an email sent to Lead Stories on June 8, 2022, Patrick De Haan, head of petroleum analysis at GasBuddy, said of the claim:

There's no way the DOE would claim that amount of fuel per week. The consensus is 600/gals per year on average.

De Haan's stated estimation was not too far off from the EIA's figure, which would equal 650 gallons of gas per year. Still, despite what the Facebook post implied, such figures are not set in stone. The EIA's insistence on clarifying that its data does not "fully capture gasoline consumption at the retail level" indicates that the federal government does not have publicly available statistics that specifically measure how much gas the average American consumes per week for their vehicle.