Are people in Zimbabwe "selling their toes for as much as US$40,000 for the big toe, US$25,000 for the middle toe and US$10,000 for the tiny toe because of high costs of living"? No, that's not true: This claim originally circulated on social media as a joke. Several news outlets report that the deputy information minister of Zimbabwe has denied the claim.

The claim appeared in a Facebook post on the This is Uganda account on May 31, 2022. Beside the images of what appear to be three feet at different stages of toe amputation, the caption of the post reads:

Unconfirmed reports show that people in Zimbabwe are selling their toes for as much as US$40,000 for the big toe, US$25,000 for the middle toe and US$10,000 for the tiny toe because of high costs of living 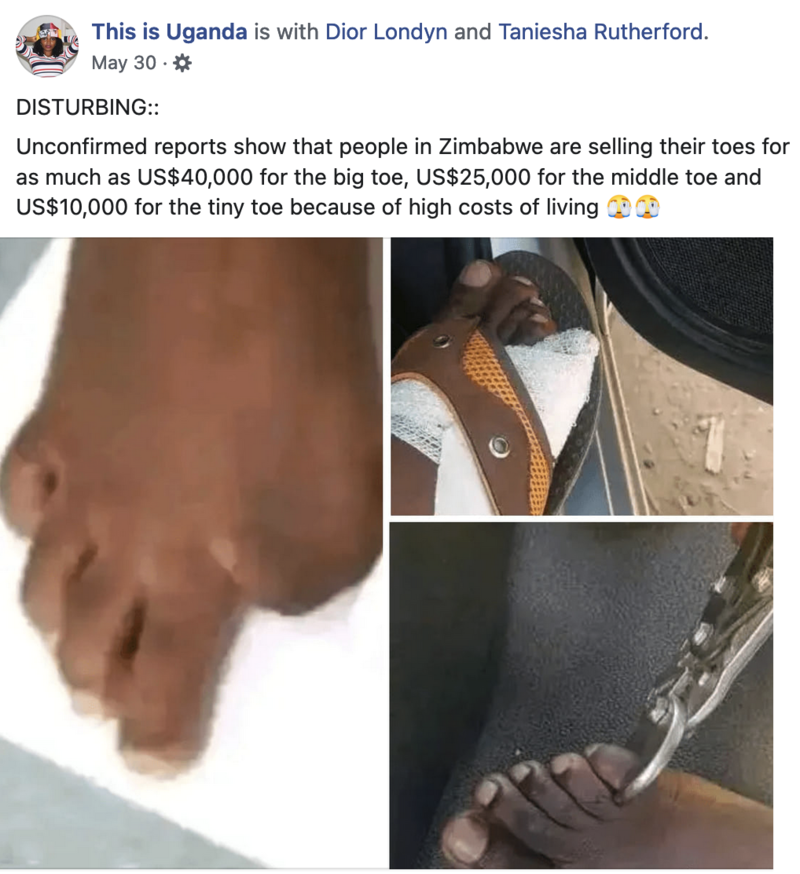 An earlier version of the images and text appear in this archived May 30, 2022, tweet. A June 1, 2022, BBC News article says the purported origin of the claim is from a May 28, 2022, Gambakwe blog post where it began as a joke and spread as a rumor that people started to take seriously.

We located a May 31, 2022, gambakwe.com article titled "XIMEX dealer Davis Kaseke says people are trading toes for money," which features one of the images and a version of the claim in the Facebook post. It did not disclose that the claim is a joke.

A Yandex reverse image search revealed that the image of the foot on the left side of the post with an amputated big toe is a toe prosthesis image located on a webpage about diabetes foot.

A June 2, 2022, South African News Site News 24 article titled, "Human toes trade in Zimbabwe a hoax, but prosecution for importing sex toys is not," included a statement by the deputy minister of information, Kindness Paradza, who said they had investigated the matter and found it to be false. Paradza added that the social media posts are "aimed at tarnishing the image of the country [Zimbabwe]."

It all began with a man who jokingly posted a video on social media saying he had sold his baby toe and bought a Toyota Hilux DG6 truck.

However, the joke was taken seriously elsewhere in Africa.

Several other media outlets also debunked the claim that people in Zimbabwe are selling their toes, giving it a false rating. Two of those reports can be found here and here.

Lead Stories reached out to Zimbabwe's Ministry of Media Information and Broadcasting Services office for a statement concerning this claim and will update this story if a response is received.