Is it true that at the beginning of June 2022 Poland annexed Ukraine? No that's not true. Such posts on social networks began to appear after the publication of a press release from the Russian Foreign Intelligence Service, in which the alleged state contract for the construction in Poland of a backup data processing center of the Ukrainian tax service was interpreted as an annexation and transfer of sovereignty. The Foreign Intelligence Service is roughly equivalent to the U.S. CIA. The annexation claim is based on a misrepresentation of terminology and is not true. Moreover, there is no mention of the annexation of Ukraine by Poland in open sources.

Allegations that Poland is annexing Ukraine originated on social media on June 9, 2022. A duplicate post appeared June 10, 2022, in Russian, with comments from the poster in both Chinese and English, saying:

Poland took over Ukrainian tax data, and Ukraine ended up as a bargaining chip between Poland and Russia 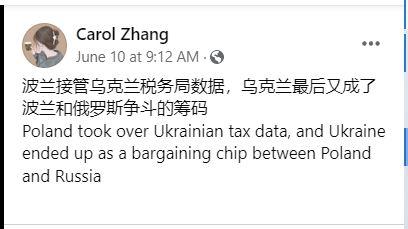 Other entries repeating this phrase verbatim in Russian can be seen here, here, here and here.

All these social media posts copy the title of the Russian Foreign Intelligence Service (SVR) press release that was published on the same day, June 9, 2022. The first paragraph of this text referred to an earlier statement by the Foreign Intelligence Service about the desire of Poland to retake "historical possessions," which Lead Stories already debunked. But the second paragraph contained a new statement (translated by Lead Stories' Russia Desk):

Warsaw is strongly pushing the regime of V. Zelensky to transfer to it de facto control over the most important state functions and institutions. With the consent of Kyiv, the Poles are currently, in particular, hosting a backup data processing center of the State Tax Service of Ukraine (GNSU). It was brought to the attention of the Ukrainian leadership that this allegedly would increase the efficiency of the said department . 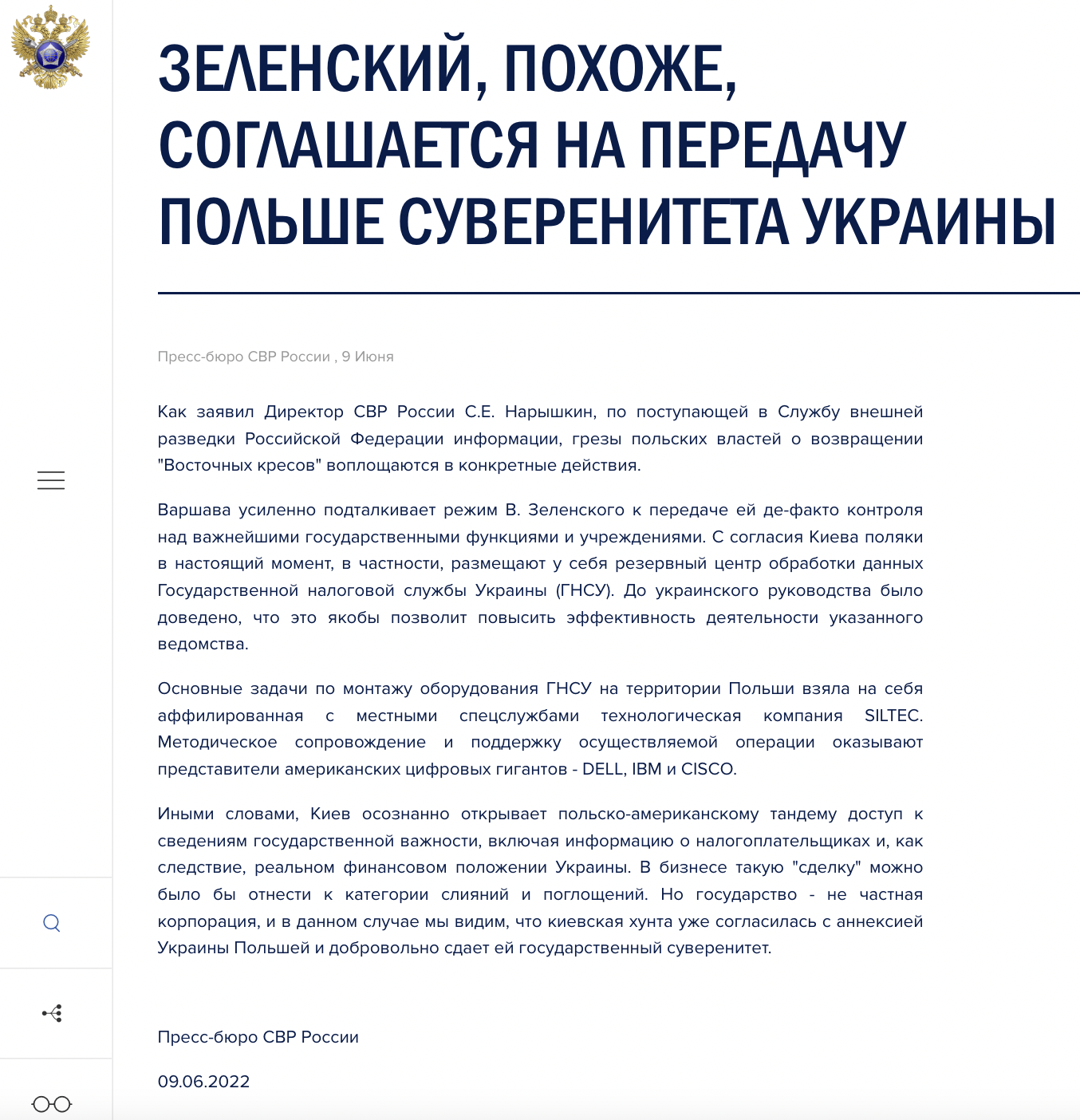 Although the company's website does say that there are European intelligence agencies among its clients, it acts as an executor of government contracts related to the storage and protection of digital information. It is standard practice in many countries for ministries and government agencies to build their own information systems, but to announce competition among private companies for these tasks.

Even before the start of the current Russian offensive, Ukraine was systematically subjected to hacker attacks on the information systems of banks and government agencies, and therefore, in the first days of a full-scale war in 2022, official Kyiv announced that such data would be transferred to servers in safer places. However, Poland was not mentioned in these reports. At the time of writing, there was no information in open sources confirming that the Ukrainian or Polish governments approved or signed a contract with the Polish firm Siltec.

The Kremlin's view of such contracts is not consistent.

Here, for example, is the tender of the Russian military department for "carrying out a special examination of United States-based Proteus ST LLC for the right to work on the creation of information security tools in the interests of the Russian Ministry of Defense."

This is analogous to the contract for a Ukrainian tax service center in Poland with the participation of a Polish company, a service arrangement Russia's spy agency says is tantamount to "annexation of Ukraine by Poland."

According to international law, annexation is a hostile seizure by one country of territory belonging to another country. Actions falling under this definition are based on the illegal use of force, in particular those prohibited by the Charter of the United Nations.

Neither Polish, Ukrainian, Russian-speaking nor credible American sources have reported that Poland is at war with Ukraine or that it seeks to control any Ukrainian territory. Since the Russian attack on Kyiv in February 2022, official Warsaw has also not declared that it considers any Ukrainian territories to be part of Poland.

But Russia annexed Crimea in 2014. After unmarked military personnel, often described by netizens as "little green men," appeared on the peninsula in late February of that year, Russia claimed that the ensuing referendum on Crimean self-determination expressed the will of the local population, but its results were not documented by independent observers. None of the Western countries recognized the results of the referendum, according to which 97 percent of voters supported integration into the Russian Federation. Nevertheless, the State Duma and the Federation Council approved the law on the inclusion of the peninsula into Russia as a new subject, and on March 21, 2014, this law was signed by Russian President Vladimir Putin.

Over the next eight years, the leaders of the pro-Russian paramilitary groups, which took partial control of the Luhansk and Donetsk regions of eastern Ukraine, repeatedly announced the possible inclusion of these territories into Russia. Since the Russian invasion on February 24, 2022, the pro-Russian authorities of the Zaporozhye region and Kherson in southern Ukraine have repeatedly announced that they will soon join Russia. In Russian-occupied Mariupol, a large welcome sign with the name of the city has even been repainted from the blue and yellow of the Ukrainian flag to the Russian tricolor's bars of white, red and blue. However, at the time of this writing, the Kremlin has not announced the formal inclusion of these regions into Russia, and therefore, from a legal point of view, they are considered occupied, not annexed.

Lead Stories reached out to Siltec for comment. We also sent requests to the Ukrainian tax service, cyber police and the Ministry of Digital Transformation. When we receive responses, this material will be updated.

Lead Stories has also checked other controversial claims related to the 2022 Russian-Ukrainian conflict. These materials can be found here.