Has a political action committee proved that Colorado Rep. Lauren Boebert had two abortions and worked as an unlicensed escort? No, as of June 19, 2022, the allegations about the anti-abortion Republican congresswoman, made in a press release from the American Muckrakers political action committee, include no independent verification or documentation. The allegations are corroborated only by what the PAC claims are text messages from a trusted source. American Muckrakers has provided no details about that source that would prove the person was in a position to know. At least one of the photos published with the claims is not a photo of Boebert. And the birthdate of at least one of Boebert's children makes less likely the claim she had an abortion in 2009. Boebert's attorney denied the allegations in a letter sent to American Muckrakers and shared with Lead Stories.

The claim appeared in a press release published by the American Muckrakers PAC on June 14, 2022, titled "Lauren Boebert Was A Paid Escort And Had Two Abortions" (archived here), which opened:

REP. LAUREN BOEBERT WAS AN UNLICENSED PAID ESCORT WITH SUGARDADDYMEET.COM AND HAD TWO ABORTIONS

Users on social media saw this on the American Muckrakers website: 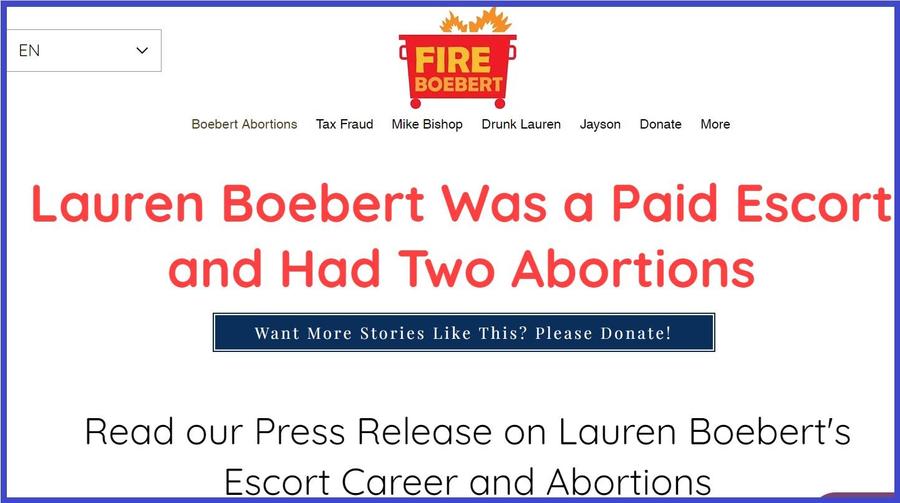 American Muckrakers PAC claimed in a June 14, 2022, press release that their information regarding Boebert was obtained "through an exhaustive investigation and a tip from a verified source close to this matter who has requested anonymity for fear of reprisals." No evidence or receipts of transactions were shown to back up the text messages, which appeared to be recreated in a document with no other information to authenticate the messages or the sender's qualifications or access.

The American Muckrakers PAC, Inc., today announced their team and volunteers have uncovered that Lauren Boebert was an unlicensed, paid escort and met clients through SugarDaddyMeet.com. Text messages show she was bankrupt at the time and looking for 'side income' and called her work 'pay to play'. She was paid to 'escort' wealthy men.

The press release alleged she had two abortions but provided no medical or financial documentation, only citing a claim made by a source via text message:

Boebert had an abortion at a clinic in Grand Junction, Colorado, sometime in 2004 or 2005 when she was approximately eighteen years old. It is not known whether this abortion was related to SugarDaddyMeet.com clients or someone else. Then, Boebert, twenty-three at the time, had an abortion in 2009 at the Planned Parenthood Clinic in Glenwood Springs, Colorado, 'due to her work with a SugarDaddyMeet.com client'.

Biology narrows the window of time in which the 2009 abortion could have taken place. The birth of Boebert's third son, Kaydon, on July 12, 2009, was the subject of news coverage (archived here) after he was born in the cab of the family's Ford F-250 on the way to the hospital in Glenwood Springs, Colorado. Though that does not make a 2009 abortion possible, she would likely have been pregnant for 192 days of 2009, leaving 174 days in the year. Lead Stories was not able to verify the birthdates of her other three sons to perform parallel analysis of the claim about an earlier abortion.

The press release included what American Muckrakers claim is a transcript of the text messages with the source who called out the anti-abortion congressperson for allegedly having two abortions: "I will tell you that she had one abortion in the Glenwood Springs at the Planned Parenthood office and the other one in Grand Junction. The first one she was 17 the second one when she was working on the site as a paid date on a site called Sugar Baby." The screenshot below shows the text: 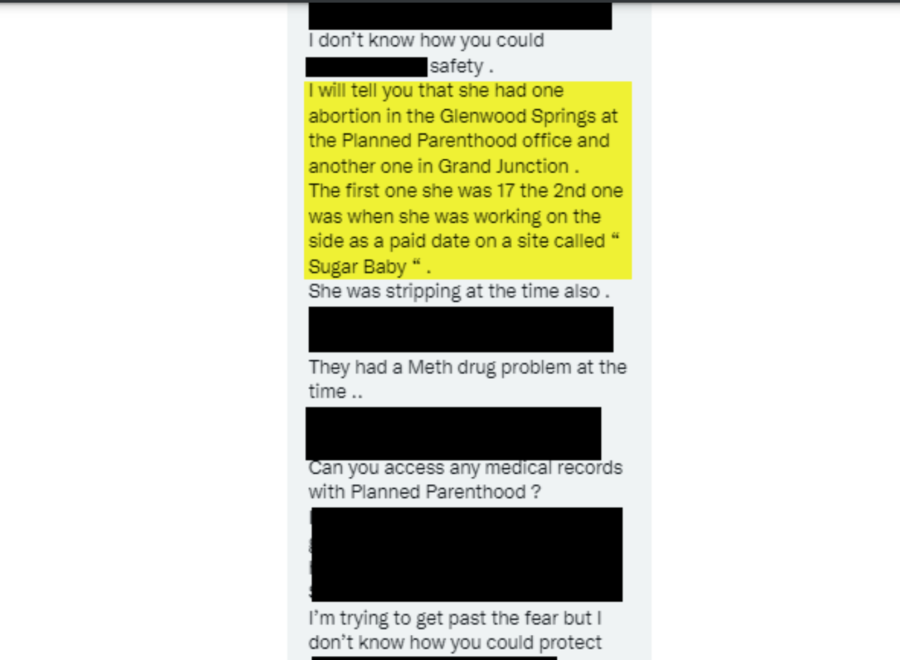 While the source is not identified and no other proof is given to verify the claim, the @FireBoebert Twitter feed declared on June 15, 2022, the source "stands 100% by the information she sent us."

The original press release contained two images of a woman the source said was Boebert advertising herself as an escort: 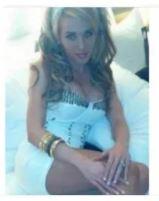 Reverse image searches on TinEye.com indicate the image of a woman in a white dress is not Boebert. It is Melissa Carone, whose claims that she witnessed voter fraud in the 2020 election in Detroit were debunked by Lead Stories.

The press release includes a photograph that shows a woman in jeans and a leopard print bra. This photo was publicly available on Explore Talent prior to the press release and was previously identified in news articles as being of Boebert. "Explore Talent is an online platform for Actors & Models to find performing opportunities and jobs," Crunchbase says about the site. It is not an escort site and is not the same site as SugarDaddyMeet.com. The press release offers no proof that the photo came from the SugarDaddyMeet.com website.

An update was posted to the FireBoebert website as questions arose about their claims. It read, in part:

Note From FireBoebert.Com Team
We make no judgement about Boebert's abortions. That is her right as a woman in Colorado.
However, we are reporting on the unbelievable hypocrisy of her railing against women that want that same right. Boebert has consistently been against woman in Colorado and the entire country having the same rights to make their own healthcare decisions.
​
In addition, we don't take a position about the propriety of being a paid escort and respect any men or women that choose this career. However, escorts are regulated in Colorado and must register under state law. We have searched and requested to see her registration without success. If Boebert has an escort registration we will correct our story and apologize to Boebert. However, we aren't holding our breath.
​
Finally, no one at Planned Parenthood or any other medical practice anywhere provided Boebert's medical records or violated HIPAA rules. We did not consult with or receive any tips from any medical providers, staff, admins, technicians, etc. Nor did we hack or receive any medical records or obtain any information in such a way that would violate any Colorado or U.S. laws. We have never seen any of Boebert's medical records.
​
All the facts came from a source we trust and others on our team know. We verified the abortion claims with another source. We stand by our story. We've not seen nor heard anything that would refute our allegations. If we do, we'll let you know.

Boebert's spokesperson shared a statement from Boebert with Lead Stories via email on June 16, 2022:

Partisan organizations putting out blatantly false and disgusting accusations won't stop me from advancing freedom and conservative values. This group's vile conduct demonstrates why people are fed up with politics. I am not going to stand by and pretend this is normal behavior. This political committee, funded by far-left Democrat donors and run by two left wing political operatives, published pages of false statements knowing they were completely fabricated. The law on this type of defamation is clear and this conduct will be subject to civil and criminal penalties. Attached is a letter from my attorney introducing our response to these lies.

Boebert's attorney sent a letter to David Wheeler with American Muckrakers on June 15, 2022. Her spokesperson shared a copy with Lead Stories on June 16, 2022. It refuted the claims made by the organization.

Regarding the two abortions the letter noted that she was pregnant and gave birth to her children in the time frame the source claimed she had the abortions:

Muckrakers published damaging photographs claiming them to be Congresswoman
Boebert. As has been reported by multiple media sources, even a simple web search
would reveal that these were not photos of Lauren Boebert.

The attorney denied that Boebert was an "unlicensed, paid escort":

Falsely claiming the Congresswoman worked as a prostitute is a disgusting and sexist
statement that, as you know, has zero basis in fact. Further, she has never filed for
bankruptcy.

Lead Stories reached out to American Muckrakers for a comment and SugarDaddyMeet.com on June 17, 2022, and will update this report, as appropriate, when they reply.