Are NATO F-35, Mirage-2000 and F-16 aircraft "suddenly fly entering warzone" amid the Russian war against Ukraine? No, that's not true: The U.S. Air Force has deployed F-35 fighter jets to Estonia to increase protection of NATO airspace, not in Russia or Ukraine, as of July 15, 2022. The headline on this news story is clickbait, falsely claiming that Russia was shocked as the jets entered the war zone. That did not happen. The text in the article is copied from a genuine news article that does not say the fighter jets are in the war zone of Ukraine.

The claim appeared as an article (archived here) where it was published by published by Probashirkonthosor.com on July 13, 2022, under the title "Russian shocked NATO F-35, Mirage-2000 and F-16 suddenly fly entering warzone." It opened: 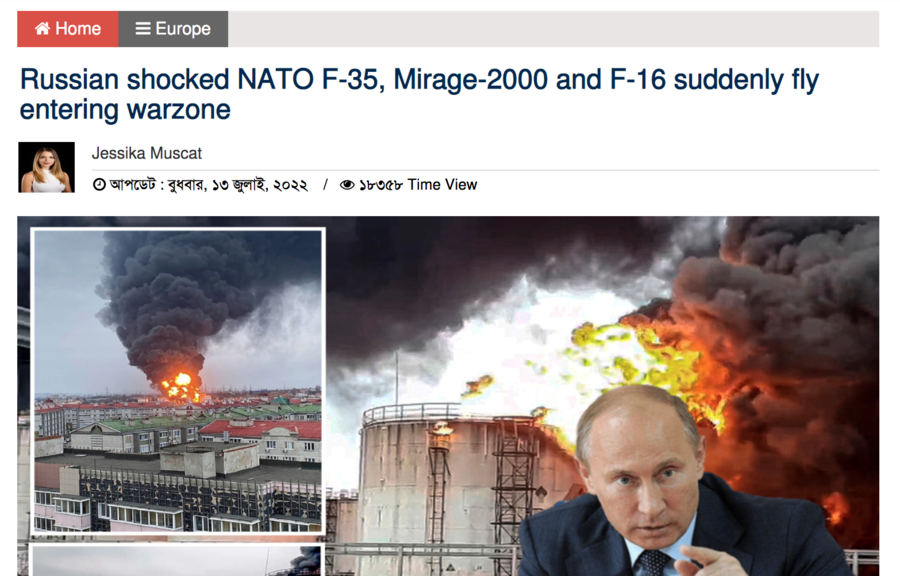 The article appeared on a website in English but according to Google Translate the site appeared to be in Bangla, the language of Bangladesh and one of dozens in use in India. The text was copied verbatim from an article published by Airforce Technology on July 8, 2022, titled, USAF deploys F-35s for Nato's Air Shielding mission. Here is how the article explains where and why the jets were deployed:

The Belgian and French fighter jets are currently deployed to support Nato's Air Policing mission and to carry out air patrols over the Baltic Sea region.

The air policing mission aims to enhance the vigilance over Nato's airspace to ensure that the allied territory is secure.

The move is intended to deter Russian aggression against the eastern border of the NATO alliance countries, Stars and Stripes reported on July 13, 2022:

NATO will add missile defense assets along the alliance's eastern borders to guard against any potential threats that arise from Russia's full-scale invasion of Ukraine, U.S. Air Force and NATO officials said Wednesday.
The strategy is called 'air shielding,' an expression coined during last month's meeting of NATO leaders in Madrid, said German Brig. Gen. Christoph Pliet, deputy chief of staff operations at NATO Allied Air Command headquarters at Ramstein Air Base in Germany.
The idea is to 'deter and shield against any possible Russian aggression,' Pliet said, going beyond what NATO already has employed on the eastern flank since the Feb. 24 invasion.