Is plankton in the Atlantic Ocean 90 percent gone? No, that's not true; this claim is missing context. The author of the plankton study told Lead Stories that the newspaper article making the claim did not accurately reflect that his study is about the equatorial Atlantic, not the entire Atlantic Ocean. Another expert in the field of plankton study told Lead Stories that "90% loss of plankton is factually incorrect."

ATLANTIC PLANKTON ALL BUT WIPED OUT IN CATASTROPHIC LOSS OF LIFE 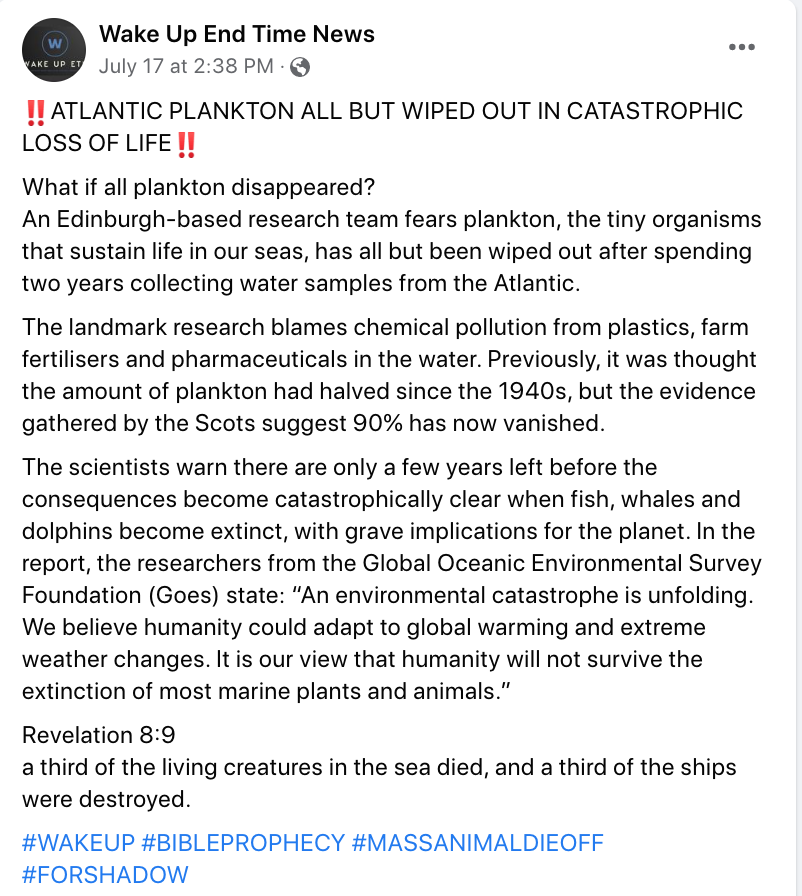 The original article in the Sunday Post in Scotland said that 90 percent of plankton was gone in the Atlantic Ocean. The original headline from the first story published on July 17, 2022, is, according to the archive on Wayback Machine: "Our empty oceans: Scots team's research finds Atlantic plankton all but wiped out in catastrophic loss of life."

The updated article does reflect the point that the water samples were taken from the "equatorial Atlantic," not the entire Atlantic Ocean.

The author of the study (archived here) is Howard Dryden, with the Global Oceanic Environmental Survey (GOES). The paper has not been peer reviewed, which means no other experts have examined the data and agreed that they are valid. From the updated Post article:

The landmark research blames chemical pollution from plastics, farm fertilisers and pharmaceuticals in the water. Previously, it was thought the amount of plankton had halved since the 1940s, but the evidence gathered by the Scots suggest 90% has now vanished. The sea water samples examined by the team were taken from the equatorial Atlantic and have yet to be confirmed by other maritime scientists or research teams.

Dryden emailed Lead Stories on July 21, 2022, to say the Sunday Post did not give him the opportunity to fact check their story prior to publication. He says the 90 percent plankton loss his survey found was not conducted in nor meant to represent the entire Atlantic Ocean. "Our survey was in the Equatorial Atlantic and we went down to 20μm [20 microns, or .000078 of an inch] with our plankton samples," he said.

In the Sunday Post article Dryden is quoted as saying:

Given that plankton is the life-support system for the planet and humanity cannot survive without it, the result is disturbing. It will be gone in around 25 years. Our results confirmed a 90% reduction in primary productivity in the Atlantic. Effectively, the Atlantic Ocean is now pretty much dead.

He told Lead Stories via email on July 26, 2022, that their survey and report were not for the entire Atlantic Ocean:

Yes, our survey and report was only for the Equatorial Atlantic, not for the whole Atlantic as was reported in the media. This was one of the reasons why there has been a major panic. However, the Equatorial Atlantic is generally more sensitive than the colder regions, so it is an early warning on a potential impending cascade reaction in the wider Ocean ecosystem.

Dryden emphasized that the situation is reversible:

While the report may sound terrible that we could lose 90% of plankton in the Oceans, in reality this is a good news story, because if the reason is aquatic pollution, then we can fix this to make the world a cleaner non toxic environment for everyone. However, if we keep with carbon tunnel vision, without regenerating life of land and marine life in the oceans, then I see no way that humanity can survive.

David Johns, head of The Continuous Plankton Recorder Survey (CPR), told Lead Stories via email on July 21, 2022, that the claim regarding plankton loss in the Post article was false: "90% loss of plankton is factually incorrect, and would have immediate and devastating consequences for marine life and the wider world."

Surveys from around the globe, including in Australia and New Zealand, have "not seen this drop," Johns said. The CPR survey takes samples every month, "across multiple routes in the North Atlantic (and North Pacific) for the past 70 years":

We have over a ¼ million samples, and we have used a consistent methodology throughout that time giving us a unique time series of plankton distribution and abundance in large areas of the world's oceans. We have not seen this drop. We have seen changes - there have been rapid responses in the plankton community to changing temperatures, in fact they were probably one of the first groups where we could see a response to climate change. In many cases this has caused a northwards shift in plankton - cold-loving species retracting northwards, warmer water plankton moving in to replace them. It's not a like-for-like replacement though, there are issues with this for the wider ecosystem (you might not know that many creatures depend on plankton to feed, from fish to whales to seabirds).

Johns cited two studies that have been published in peer-reviewed journals recently that show the true changes in plankton, which, while alarming, are not at 90 percent. One, titled, "Ocean Regime Shift is Driving Collapse of the North Atlantic Right Whale Population," "shows moving plankton species (going northwards into colder water) can impact whales and where they feed - linked to climate change." Another, titled, "Climate variability and multi-decadal diatom abundance in the Northeast Atlantic," "actually shows increasing phytoplankton biomass at many points in the NE Atlantic, linked to climate changes."

Taking samples from tropical or equatorial waters would not be an accurate representation of plankton throughout the entire Atlantic Ocean as "those areas are typically low productivity, low biomass of plankton, but a high diversity of very small organisms," Johns said. He believes the methodology of the Dryden study might not have yielded completely accurate results because:

Also, many types of zooplankton actively migrate through the water column, coming to the sea surface at night, and going to depth in the day to escape predation (which is why we record local time on all our samples so we can account for this) - so if you took a sample in the surface waters in nice sunny weather, in a great many areas of the ocean, particularly the open ocean, there would be virtually nothing there. That's normal.

The CPR team at Plymouth have a massive amount of data, but none for the Equatorial Atlantic. Also, their sampler can only detect plankton down to 270um. The GOES citizen science team measure down to 20um, so it also monitors for marine microplastics, particulate black carbon from the burning of fossil fuels, and phytoplankton.