Was the 1973 Roe v. Wade decision on abortion only passed because Norma McCorvey, who was called "Jane Roe" during the case, had lied about her pregnancy being caused by rape? No, that's not true: The question of how McCorvey had become pregnant was not a factor in the Supreme Court decision. According to 1987 reporting by UPI, Sarah Weddington, the lawyer who represented McCorvey, said no information related to the cause of McCorvey's pregnancy had been included in any of the papers filed with the court.

The brief video clip has been circulating on social media for several years. The clip comes from an August 10, 1995, edition of ABC's "Nightline" featuring Cokie Roberts. Within the "Nightline" episode, there is a clip from a September 13, 1987, WUSA-TV interview, "Searching for Justice: Three American Stories" with Carl T. Rowan. It features McCorvey admitting that she had not been raped as she had previously claimed. One example of this clip was posted on Twitter (archived here) with misleading captioning on June 24, 2022. The tweet says:

Do you remember this?

The text captioning that has been added to frame the video reads:

DID YOU KNOW ROE V. WADE WAS PASSED ONLY BECAUSE ROE LIED ABOUT BEING RAPED? SHE ADMITTED IT ON LIVE TV 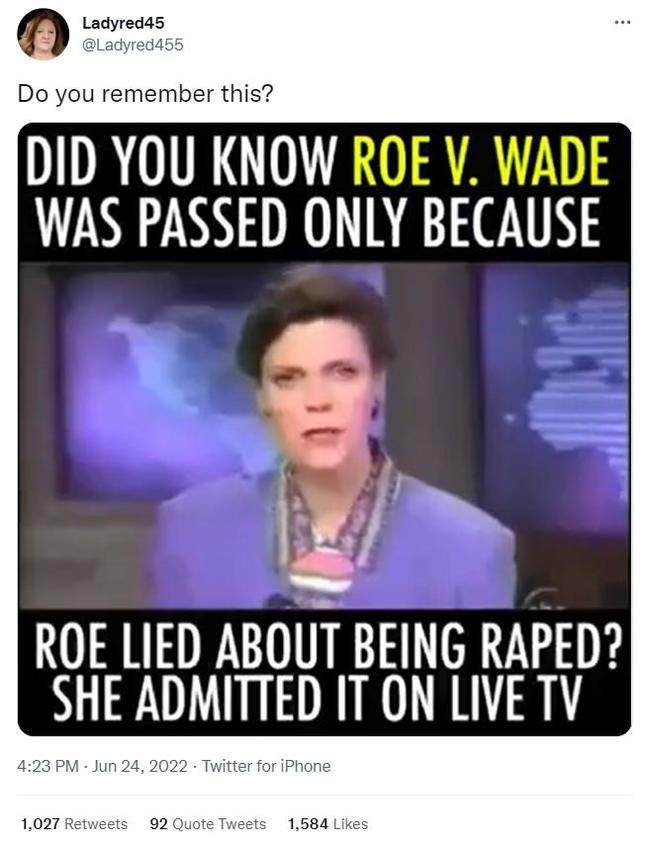 The 1987 program "Searching for Justice: Three American Stories" was not a live broadcast. In advance of the September 13, 1987, airing, a copy of the program's transcript was released on September 8, 1987. United Press International published an article (archived here) that began:

The woman whose famous abortion case led to the Supreme Court's Roe vs. Wade decision said in an interview released Tuesday she lied when she told lawyers her unwanted pregnancy was the result of a gang rape.

These three news reports each include references to remarks made by Sarah Weddington, the lead lawyer in the case. The New York Times wrote:

According to a news release issued by WUSA about the interview, Sarah Weddington, one of the two lawyers who took the case to the supreme court, said she had never 'touched the issue of rape and only emphasized the question of whether the Constitution gives to the state or leaves to a woman the questions of what she can or must do with her body.'

UPI obtained a quote directly from Weddington on September 8, 1987. They wrote:

Sarah Weddington, the Austin, Texas, lawyer who represented McCorvey, told United Press International Tuesday, 'The issue of how Jane Roe became pregnant is irrelevant to the case. There was nothing in any of the papers filed with the court or in any of the oral arguments made that related to the cause of the pregnancy.

'Rather, the case was about a young woman who was pregnant, who didn't want to be pregnant, and who had been denied an abortion because of the provisions of the Texas anti-abortion statute.

'All of these facts are true. No fact was ever presented to the court unless I was certain we could prove it,' she said.