Did the Loire River, the longest in France, run dry for the first time in at least 2,000 years due to an unprecedented drought in southwestern Europe? No, that's not true: The Loire River did not run dry, nor did it fall to a record low flow rate. This photo shows a branch of the Loire that dries up when the water level falls. This fact check is intended to add context about the path of the river and the supplemental water from the reservoirs.

It is true that the river's flow rate was extremely low, and at its lowest since dams had been installed in the 1980s. Drought conditions did require some crisis measures to conserve water in mid-August. The riverbed is engineered to contain the flow to one main channel. The Loire splits and flows to either side of an island, "île Batailleuse." The trees visible on the right side of the photo are on the island. The road connecting the former communes of Varades on the north side of the river and Saint-Florent-le-Vieil to the south crosses the island by way of two bridges. The second bridge, not visible in this photo, spans the narrow but navigable portion of the Loire River hidden by the trees.

A series of photos of the Loire riverbed by press photographer @DubrayFranck was posted to Twitter on August 9, 2022, by the newspaper Ouest-France. One Twitter post featuring just one of the photos began to get attention online around August 10, 2022. An August 14, 2022, Facebook post with a caption that claimed "nowhere in the past 2000 years has the Loire run dry" was shared over 30,000 times. That post was updated on August 20, 2022, to include some additional links and context. Another copy of the viral post was reposted on Facebook on August 15, 2022. It reads:

From a Facebook friend-'This is the current state of the Loire, the longest river in France. This has not happened before in at least the 2000 years since literate people inhabited France. The Romans would have written about this. The medieval Franks would have written about this. To the best of our historical knowledge, nowhere in the past 2000 years has the Loire run dry, and likely never long before that. The drought that now grips southwestern Europe may well be unprecedented in recorded human history.'
'This is in the heart of wine country where grapes grow in abundance and wheat waves like golden seas- but not now. Now the wheat burns and the grapes whither to raisins on the vine. This is the end of days. And on Monday morning I'll return to work and pretend this isn't happening. It's complete madness.' 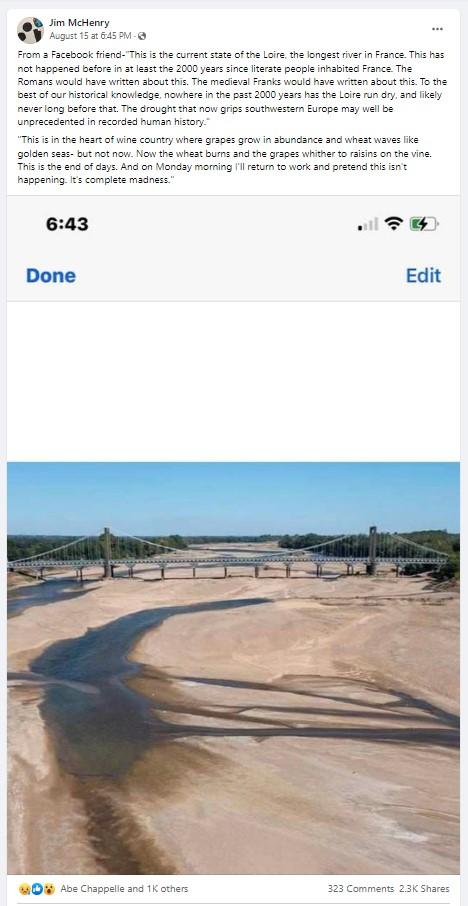 This photo is current and real as of its posting, but the caption on later posts does not explain that the main river channel is not in view. An August 19, 2022, fact check on truthorfiction.com contains additional references regarding what the French call the "dead arm" of the Loire.

Below is an image of the coordinates 47°22'04.10" N 0°59'51.77" W as it appears on Google Earth Pro. This free program has a "history" feature that shows satellite images of the same location in different years (not all years are available). This picture shows how the Loire appeared on July 26, 2002. The river flows from east to west, and it is possible to see how the branch to the north of the island has much of the riverbed exposed, while the branch flowing on the south side of the island is narrow but uninterrupted. Images taken in September 2021 by the Google Street View car crossing the two bridges (here and here) also illustrate how different the Loire appears on the north and south side of the island when the water is low, even without extreme drought conditions.

The photo in the viral Facebook post shows a view of the bridge, with the island on the right side of the picture, looking to the east. Below is another view of the bridge but looking to the west. This was included in the original series of photos posted on Twitter on August 9, 2022, by Ouest-France. The point of the island is on the left, and beyond it the flowing main channel of the Loire can be seen. The caption added to this photo, "Le niveau d'eau de la Loire au plus bas" says, "The water level of the Loire at its lowest." 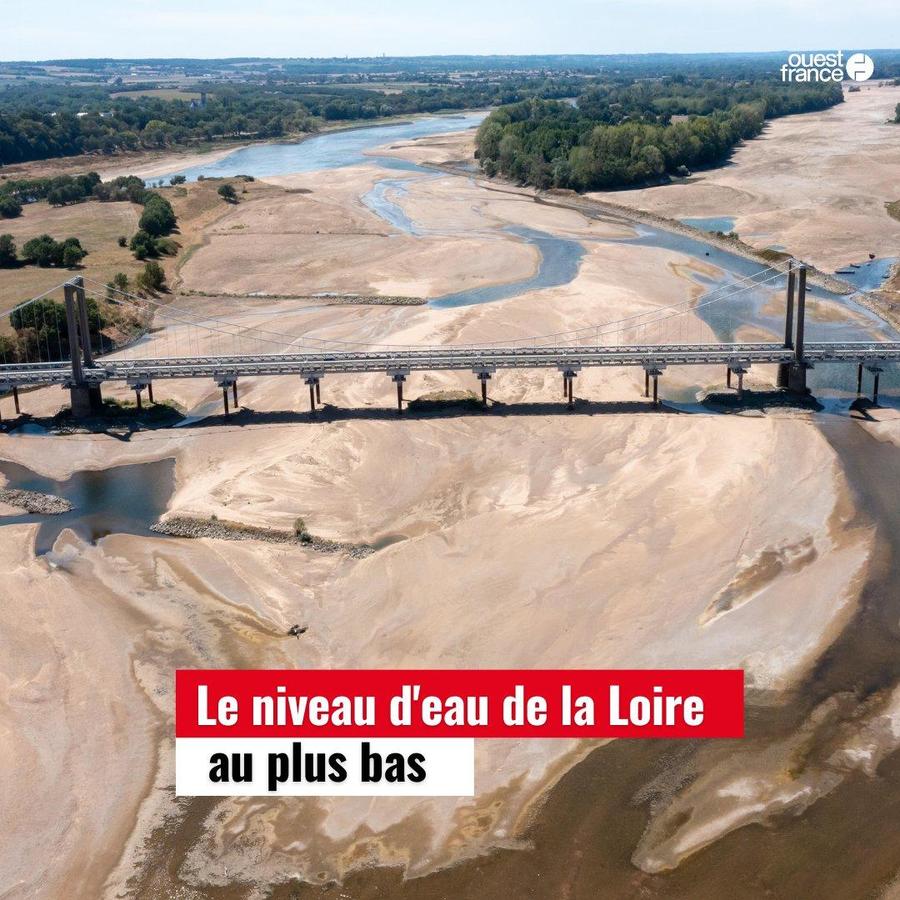 On August 20, 2022, ouest-france.fr published an article titled, "Arms of the Loire are dry: is this level of the river exceptional or not?" which had some explanations about what is typical or not for the Loire. The article explained that before the check dams were constructed in the 1980s it was more common to see the sandbanks in the summer. The article said the historic lowest flow of the river, measured in cubic meters per second, happened in 1949:

Matthieu Nicolas, a specialist in hydrology and floods at DREAL, the French government agency Regional Department of the Environment, was quoted:

Nicolas said the situation was serious and registered at the crisis threshold for two local prefectures, Maine-et-Loire and Loire-Atlantique, in mid-August. The level four (out of four) restrictions to preserve resources:

Reserve the resource for priority uses , namely the supply of drinking water, uses related to health, public safety, civil security, the safety of industrial installations, watering of animals and the preservation of the biological functions of watercourse

Two dams regulate the flow of water to the Loire and can add to the flow in the summer. The reservoirs were only at 86 percent capacity at the end of last winter. According to the head of the dams department of the Loire public establishment, Emmanuel Lehmann, September is usually the month of the lowest flow, but "the volume of water stored in the reservoirs makes it possible to hold out until the end of the year."

An August 17, 2022, article on Reuters.com titled, "France's river Loire sets new lows as drought dries up its tributaries" mentions the four nuclear power plants along the Loire that produce one-fifth of France's electricity. They are dependent on the river for cooling. Eric Sauquet, head of hydrology at France's National Institute for Agriculture, Food, and Environment (INRAE) is quoted:

'The Loire's tributaries are completely dried up. It is unprecedented. ... We have to worry about the Loire ... Fish need water to live, cool water. When water levels get this low, their environment shrinks and they get trapped in puddles. ...
'Climate change is underway, it's undeniable ... All users will have to re-think their behaviour with respect to water resources.'

Here's a detailed look at the impact of #drought on France's Loire River, with @planet images collected exactly a year apart on August 11 2021 & 2022. pic.twitter.com/ziyYh9Oosn