The happy music and smile only make this more demented!

The caption of the post read, "Tell me again that evil is not after our children...... pure evil." 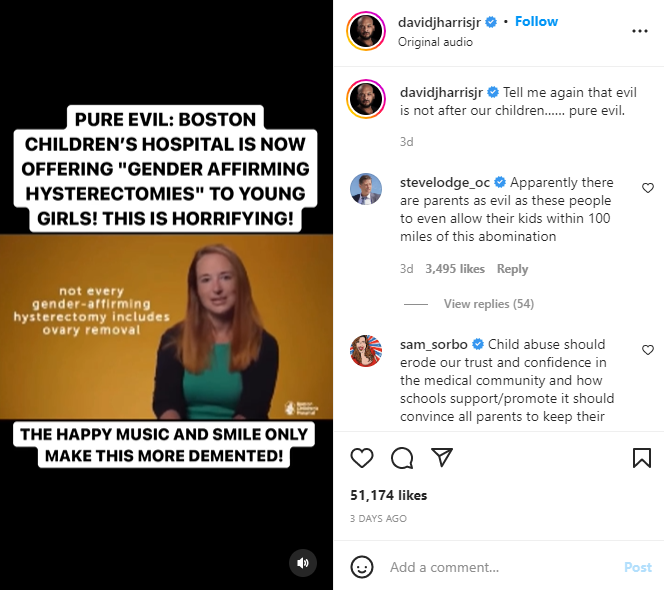 Links in other online versions of the claim that supposedly led to the original video (see here, here and here) did not work at the time of writing.

In the wake of the claims made about the hospital's hysterectomies for gender-affirming care, the hospital released a statement via Twitter (archived here) on August 16, 2022. It read in part:

For a hysterectomy performed as a part of gender-affirming care, Boston Children's requires a patient to be capable of consenting for themselves. Age 18 is used to reflect the standard age of majority for medical decision-making. Boston Children's does not -- and will not -- perform a hysterectomy as part of gender-affirming care on a patient under the age of 18.

A resource from the hospital's Center for Gender Surgery explains that the center does offer gender-affirming surgeries. Patients who are 15 years old and older may be eligible to receive chest surgeries if they meet the requirements, including medically observed gender dysphoria. However, while the resource does not mention hysterectomies, the resource makes it clear that genital surgeries are not offered to children:

All genital surgeries are only performed on patients age 18 and older.

A previous version of the resource stated that a vaginoplasty for gender-affirming care could be offered to a patient who was at least 17 years old, but as shown above, that rule has been updated.

The resource also states that the center follows the World Professional Association for Transgender Health guidelines to "surgically treat people who are stable in their gender identity and have documentation of persistent gender dysphoria." The guidelines mostly suggest that only patients who have reached the age of majority in their country -- which in the U.S. is generally 18 years old -- should receive surgeries that treat gender dysphoria.

Lead Stories reached out directly to the hospital's Center for Gender Surgery and will update this fact check with any response.

Lead Stories previously published a fact check of a claim that Dr. Rachel Levine, assistant secretary for health at the Department of Health and Human Services, said that gender affirmation surgery should be available to children. Levine never said that.