Do federal laws protecting bats prevent a homeowners association (HOA) from "legally doing anything" if someone in the neighborhood installs a bat roost to attract thousands of bats to the neighborhood? No, that's not true: This contrived scenario depends on unlikely variables coming together in order to "succeed" -- to use endangered animals and the protections afforded to them to intentionally cause a disruption in a community with common rules. Not all varieties of bats are federally protected, and which bats are protected by state laws varies state to state. Most states have guidelines for what months bats can be humanely excluded from structures without harming them.

In addition, the 7,000-bat-capacity roost pictured in the claim represents a considerable investment, is heavy and requires a foundation and a crane or lift to install at the required height. Extra-large bat houses are known to take two or three years to gain occupants. An HOA would have plenty of time to stop the construction well before any bats, endangered or not, would take up residence. Bat houses do not attract bats to an area, they shelter bats who are already present -- especially those who may have been displaced from other structures or habitat.

The reverse image search engine TinEye shows the meme appeared as early as March 26, 2021, and circulated first on Tumblr. A copy was posted on Facebook on July 13, 2022, by the page, Computer: E n d C a p i t a l i s m with a bat emoji for a caption. The text of the meme reads:

IF YOU HATE YOUR HOA
Nothing funnier than installing a 7,000+ capacity Bat Roost, causing thousands of bats to come into your neighborhood.
The will cause your HOA to complain, but they cannot legally do anything, because bats are Federally protected animals, and it cannot be removed. 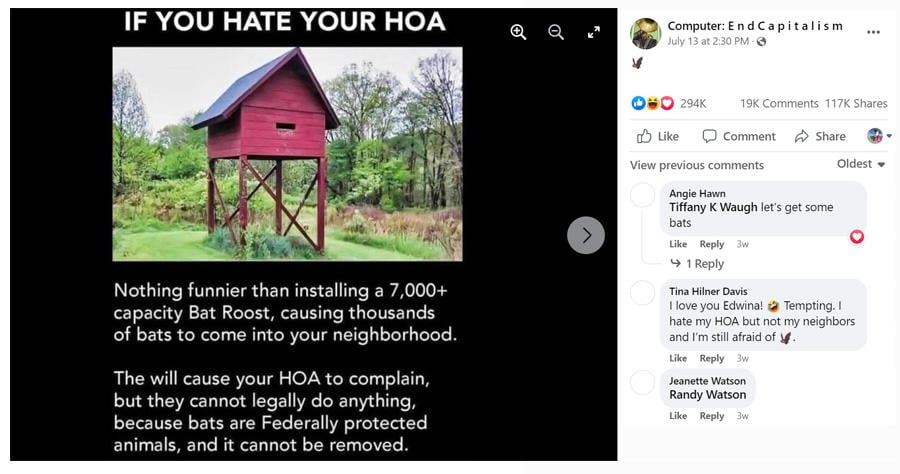 A reverse image search for the photo used in the meme shows this bat house as one example of the large "Bat Condo" design offered by Bat Conservation and Management, Inc. (BCM) This structure, which is estimated to be able to hold up to 7,000 bats, is 8 feet by 8 feet by 8 feet not including the legs. BCM offers consultation services for this bat condo because it's not simply an off-the-shelf purchase. BCM, offering "experience and expertise which can turn a week long project into three days," explains:

... The parts are then shipped to the site for assembly and finishing which will take about four or five days, including foundation. Light equipment access to the site (flatbed truck and/or tractor-loader) may be necessary. 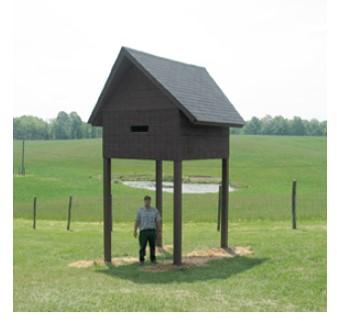 Information about the Grandview Bat Condo in the New River Gorge National Park in West Virginia and the impact of white-nose syndrome -- a disease that affects hibernating bats -- highlights how unlikely the meme's suggestion is -- that 7,000 bats could simply be summoned to any neighborhood on a whim.

In the past, visitors used to count over 1,000 bats emerge from the condo each evening. Since the discovery of white-nose syndrome in the park, visitors typically only see fewer than 50 bats each evening.

According to Merlin Tuttle's Bat Conservation, once the bat house is built, "Two to six months is closer to average [to attract bats], and some very successful houses have taken years to gain the first occupancy."

Lead Stories spoke with Duncan Hicks, the grant and membership coordinator, to ask about the 7,000 bat condo meme. To illustrate an agricultural setting, Hicks used the example of pecan farms that rely on bats to eat crop pests. He said four sets of four regular size bat houses, each with a 60-bat capacity, would likely meet the needs at one farm. Hicks explained that a certain thermal mass (a number of bat bodies) is needed for a large roost to function as it should. From the website's page about selecting a quality bat house:

Early success is likely in areas where bats have already experienced bat houses. Some extraordinarily successful houses, especially extra-large ones, have taken two to three years or more to succeed.

At a federal level, endangered bats are protected by the Fish and Wildlife Act of 1956 and the Endangered Species Act. Among the mammals listed by the U.S. Fish and Wildlife Service (FWS), nine bat species are listed as endangered and two listed as threatened. Although there are bats that have federal protections, not all do and some are specific to a small region. Other bats are protected at a state level.

Among the mammals listed by the U.S. Fish and Wildlife service (FWS) there are currently nine bat species listed as endangered and two listed as threatened. The list indicates five of the eight FWS regions, including Pacific Islands, where these endangered bat species may be found. Currently there is a proposal to reclassify the Northern Long-Eared Bat, from threatened to endangered. This species has a large range in thirty eight states. Each scientific name of a bat on the list, for example Corynorhinus (=Plecotus) townsendii virginianus, the Virginia big-eared bat, is hyperlinked and opens as a new page with a range map (example below) showing documented populations to a county level. This is to demonstrate that although there are bats who have federal protections, not all do and some are specific to a small region. 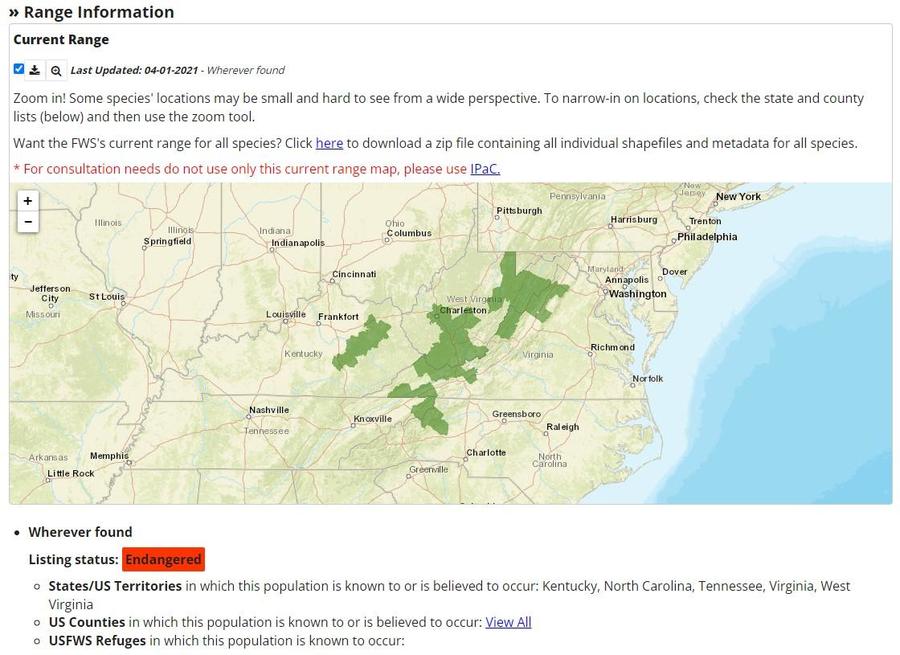 The meme proposes the hypothetical situation that an HOA could not enforce neighborhood codes if a homeowner installed a large and unapproved bat roost. Bats are most vulnerable in the winter hibernation, usually in caves, and in the summer, when helpless young are in the maternity colony, which could be in an attic or in a bat house. An HOA could require the structure come down (if they missed it going up) either before the bats move in, in the early spring, before bat pups are born, or late summer when they are mature enough to relocate.

State-specific guides consider the habits of local bat populations and their seasonal behaviors (examples: New Jersey, Vermont, Massachusetts and New Mexico) to help homeowners wishing to evict bats, and comply with state laws that protect them.

Lead Stories reached out to Bat Conservation and Management, Inc. and will update this article if appropriate.