Are these posts proof that British elementary school students and kindergarteners are being taught to tolerate sexual abuse? No, that's not true: There's no evidence to authenticate pictures of a brochure about strangers who approach, with the brochure saying, "do not call him a pedophile." Posts about the brochure first appeared on a Russian social media platform, citing an un-named Russian traveler as a witness and providing no corroboration. In another case, a post cites a witness with inconsistent identifying information. The English-language leaflet depicted contains the kind of unprofessional grammatical errors that would be rare in a leaflet prepared for and by schools or social agencies. Further, the post making the claim does not show contact information anywhere on the leaflet. In posts making the claim, the location of the purported distribution of the leaflet shifts from the UK to "the US and Britain" and then even further to "any country" that predominantly speaks English. Lead Stories found no credible reports to confirm that such leaflets have ever been distributed to schoolchildren, an event that would be newsworthy in any context.

In the UK, children are taught not to be afraid of pedophiles but to be friends with them.

- Guidelines are distributed in kindergartens, which state:

"What do you do when a stranger approaches you on the street?

Don't be afraid of him, he usually won't harm you. Don't yell and cry, it can hurt the stranger's feelings. Don't call him a pedophile, that's a dirty word. Try to get to know him better. He just wants to make new friends like you. Invite him over to your house. You can't imagine how much fun your new friend can have."

These people are sick, their agenda is sick. What's next?

The post came with a picture of the purported brochure attached to it. 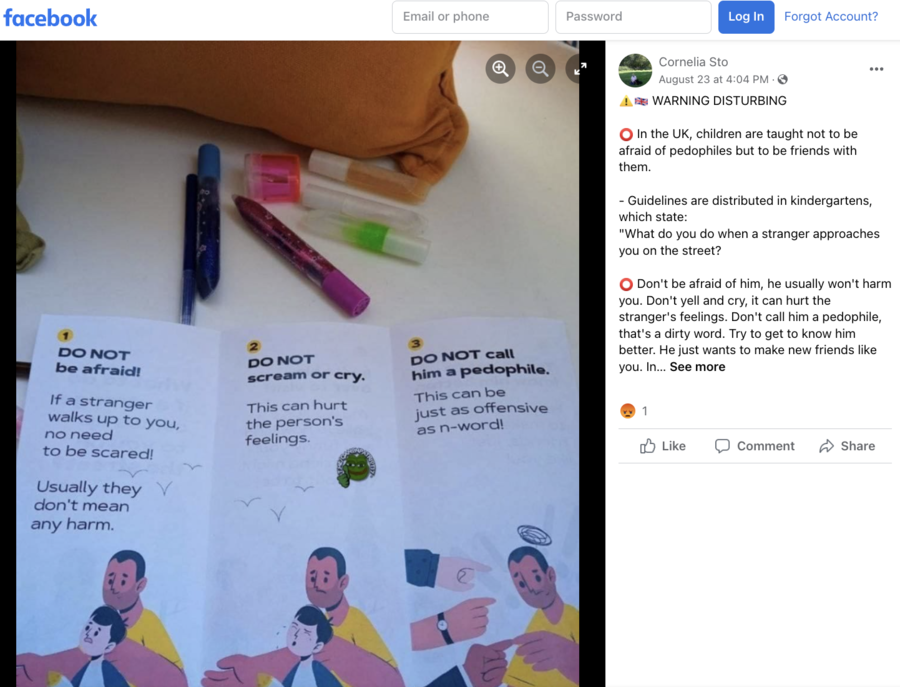 A series of duplicate versions of the same claim about the leaflet on different social media platforms presented a chorus of mutually exclusive statements, full of omissions and contradictions.

Contradiction #1: The leaflet is and also is not already in circulation

Another Facebook post of the pamphlet, published on August 18, 2022, contained a self-contradicting statement: It claimed that the photo of the leaflet was "from a UK primary school," simultaneously saying that it is not in circulation yet and "is due to be released this September."

Definite and indefinite articles (like "the," "a," "an" in English) are not a feature of Russian grammar and even cultivated Russians sometimes forget them when writing in English.

In the purported English schoolhouse leaflet, the common phrase "the n-word" did not have an article in front of it, a mistake a native English speaker would be unlikely to make.

Additionally, "pedophile" is a U.S. spelling variant. In British English, it is much more commonly written as "paedophile."

Contradiction #3: A purported witness, who appears middle-aged, is listed as 16 and her marital status is inconsistent on her profile

One of the Russian Telegram channels cited a social media account of a person named "Elena F. Sitnikova" as a source who saw the pamphlet. A search on this social media platform shows a single profile with this user's name. It is set up in Toronto, and the user's description contains serious discrepancies between the picture, declared age (16) and marital status (people below 18 are highly unlikely to be married in Canada due to the age restrictions on marriages with an older person):

On August 15, 2022, this account indeed shared photos of the brochure, clearly stating that the country where they were taken is unknown: 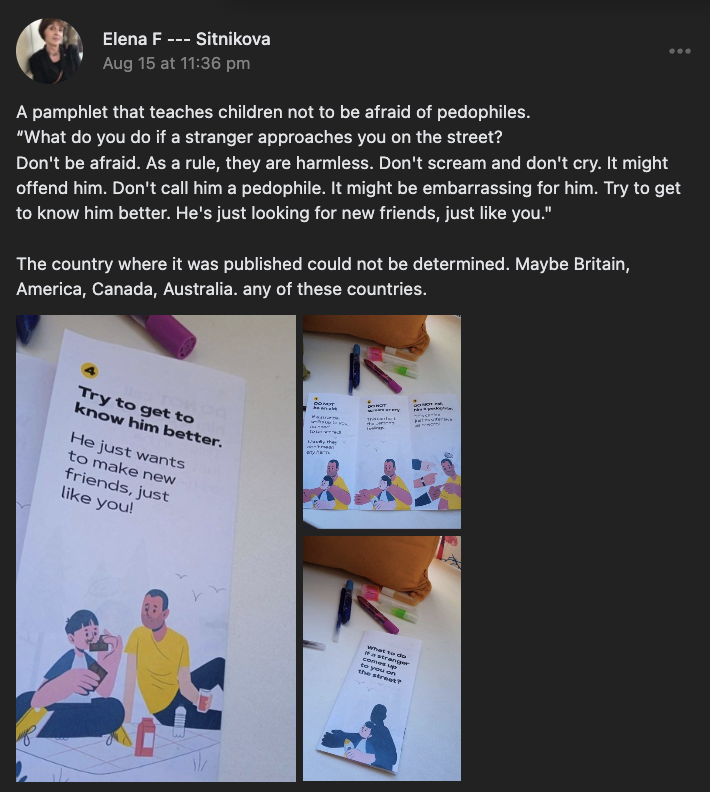 Omission: Posts describing the circulating leaflet leave out the municipalities where they were purportedly distributed

Other social media entries (for example, here and here) claimed that the incident took place in "the US and Britain" at the same time but didn't name cities or particular schools. In some instances (for example, here and here), these pictures were shared without any textual description or references to a particular location. A TikTok video posted on Facebook said that "this is what they are handing little kids," conveniently not going into specifics on who "they" are and when and where the alleged incident happened. The claim was also posted on UGetTube, a "YouTube equivalent video delivery platform that offers users a safe harbor and a guaranteed censorship-free-forever experience."

Omission: Unlike the majority of official educational leaflets in schools, this does not include contact information

Though it is described as material being provided in schools, neither the cover nor other pages of the purported brochure include logos of any organization, school or government agency.

A spokesperson of the U.K. Department of Education cited by Reuters said that the government agency has "no reason to believe this kind of misinformation is being distributed by a school":

We do not believe any teacher or head would sanction something so clearly dangerous. If anyone is aware of anything like this being distributed in their school community, they should contact their school

Reuters also reached out to the Office for Standards in Education, Children's Services and Skills (Ofsted), the department overseeing schools and reporting to Parliament. A representative of this agency said:

No, we haven't come across these pamphlets and strongly doubt they could be real.

A reverse image search shows that pictures of the purported leaflet started circulating on social media as early as August 8, 2022, on Vk.com, a Russian version of Facebook: 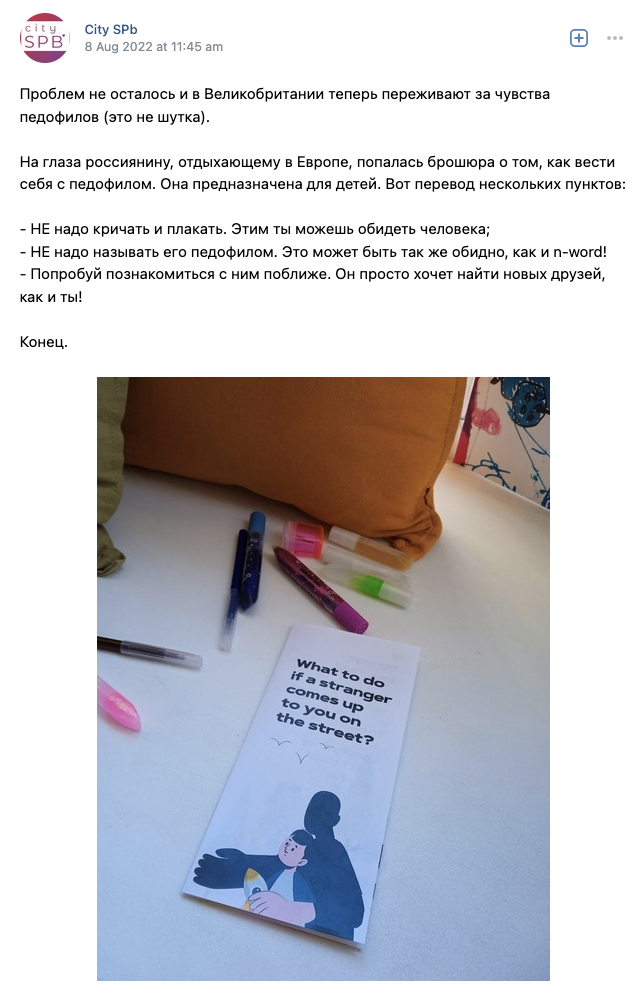 The first two lines of the post offered an obscure theory of how the images came into existence but didn't give away any verifiable details:

There are no problems left, and Great Britain now worries about the feelings of pedophiles (this is not a joke).

A Russian vacationing in Europe spotted a brochure on how to deal with a pedophile. It is intended for children.

On the same day, August 15, 2022, the website of Tsargrad TV (an ultra-conservative Russian TV channel owned by Konstantin Malofeyev, known as an "orthodox" businessman sanctioned in the U.S. since 2014 with pro-monarchy political views and close ties to Vladimir Putin) published an article based on anonymous Telegram channels.

Despite a lack of concrete information on the origin of the brochure, other Russian-language websites quickly picked up the story (one example is here).

Besides Russian and English, the same claim appeared in other languages, including Polish, Spanish and Persian.

Russian propaganda plays on a theme that pedophilia is a feature of the decadence of the collective West (Europe and the U.S.). A 2019 study summarized how the rise of so-called "traditional values" led to the merging of two unrelated things, homosexuality and pedophilia in both domestic and international state's rhetoric:

Their assertions were based on a dualistic vision of an opposition between the Russian world, a bastion of traditional values, and the Western world, seen as a decadent haven of 'non-traditional' sexuality, as illustrated by the term 'Gayvropa' used in this milieu, obtained by contracting the terms 'gay' and 'Yevropa' (Europe). Echoing the discourse of the highest authorities regarding the existence of two Europes, these crusaders called on Russia to take the lead of the side championing traditional family values. [...]
The 'little Liza' case expanded the international dimension of the anti-paedophile struggle, already beginning to be present in the case of Irina Bergseth. On 16 January 2016, the main Russian television channel aired a documentary about the sordid fate of Liza, a thirteen-year-old from a German family of Russian extraction, who had allegedly been raped in an apartment by three immigrants. The documentary highlights the powerlessness of the German police, the emotions aroused in the Russian community in Germany and a video in which a man boasts of having raped the girl. [...] In Russia, the Foreign Secretary made clear their determination to carry out a full investigation. But it soon became clear that Liza had completely invented her story, inspired by narratives transmitted by her parents, active members of the Pegida movement and long convinced that refugees were raping children. In Germany, the case became synonymous with Russian propaganda about European decadence.