Does a video that shows a stage-lighting support hitting an astronaut as he descends onto what appears to be the moon's surface prove that Apollo 11's July 20, 1969, moon landing was fake? No, that's not true: This video was produced as a tribute to moon-landing conspiracy theories. The video's creators also made a website that explains their motivation: "We did it for fun and to entertain the world."

The spoof moon-landing video was written and directed by British director Adam Stewart and shot in a London studio in the spring of 2002, according to a website, moontruth.com, made by the video's creators and now archived. The video carried that site's watermark, "moontruth.com."

The video resurfaced on TikTok, but with a graphic that suggests it provides proof of a fake moon landing. This video, in turn, was reposted on Instagram on October 19, 2022. It was captioned:

Text on the video reads:

How can anyone believe NASA after watching this? 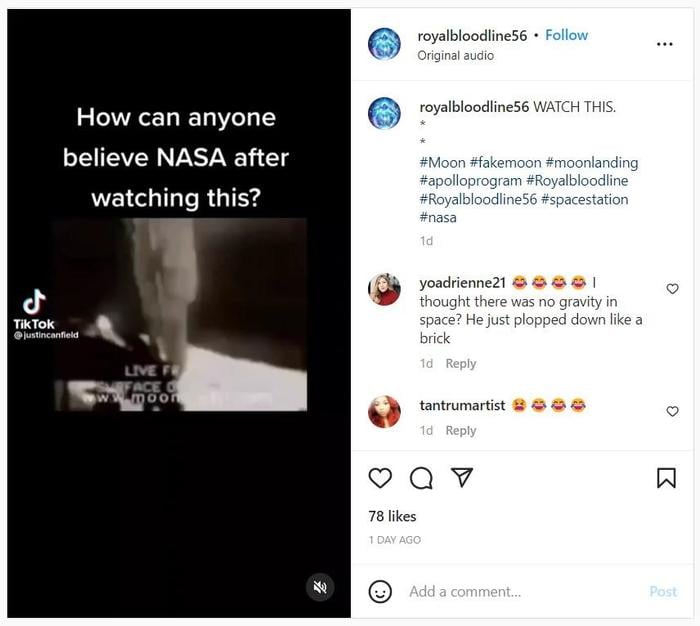 The video is clearly watermarked www.moontruth.com. That URL redirects to a domain hosting service that states this URL is available and invites visitors to "Imagine this domain as your brand."

The Internet Archive has copies of the website going back to November 3, 2002. The archived homepage of moontruth.com spoofs the text of a conspiracy website:

At 4:17 p.m. Eastern Daylight Time, on July 20, 1969 Neil Armstrong was seen on television by millions of people around the world apparently walking on the surface of the moon, and making one giant leap into the pages of history. BUT DID HE? Conspiracy theories abound on the Internet.

We have obtained footage - apparently authenticated by THIS document - showing that the Apollo 11 moon landing footage was faked.

As this footage reveals, the event was actually recorded, presumably by a group of covert operatives in a film studio at an unknown location. An elaborate stage set had been built to resemble what would have been the Apollo Eagle landing craft on the surface of the moon.

The rumours are true. The world has been hoaxed.

Although not included in the earliest archived copies of the website, as of April 12, 2003, a link appeared at the bottom of the page that says "And click here to discover that the above is all bullshit." The link leads to another page that lets the reader in on the joke. It says:

The clip is FAKED

It is not an out-take leaked from a NASA top secret reel.

It was done in a studio, for fun, and to entertain webheads like us.

Yes, the clip is fake. It was shot in a studio in London in spring 2002. It was based on an idea by director Adam Stewart, who was a space exploration nut. He had read the conspiracy theory sites and decided he wanted to make a spoof based on the idea that the Apollo 11 moonlanding was faked.

Adam Stewart died on 28th August 2002. He is greatly missed. Please read this tribute to him