Are Australian farmers being forced to inject livestock with mRNA vaccines that are killing cows? No, that's not true: Some biotechnology firms and governments have announced plans to research and eventually roll out less expensive and more efficient mRNA vaccines made for livestock, but no such "mandate" has been announced, and thus no mass die-off of vaccine-receiving animals has been confirmed as of October 2022.

Copied from an email:

A friend informed me today that her neighbor, a dairy farmer, is now forced to vaccinate her herd with an mRNA vaccine! (NSW)

She complied and of the 200 head of cattle, 35 died instantly! I would sue the DPI

The farmer said it is mandatory for all dairy farms to have their herd jabbed with this mRNA vaccine. Am not yet sure if that's for NSW or across Australia, but will investigate immediately

Milk is altered and you CONSUME IT!
Butter constitution, yoghurt, cheese is altered

Will chicken and other meats be next?

Here is a screenshot of the post at the time of this writing: 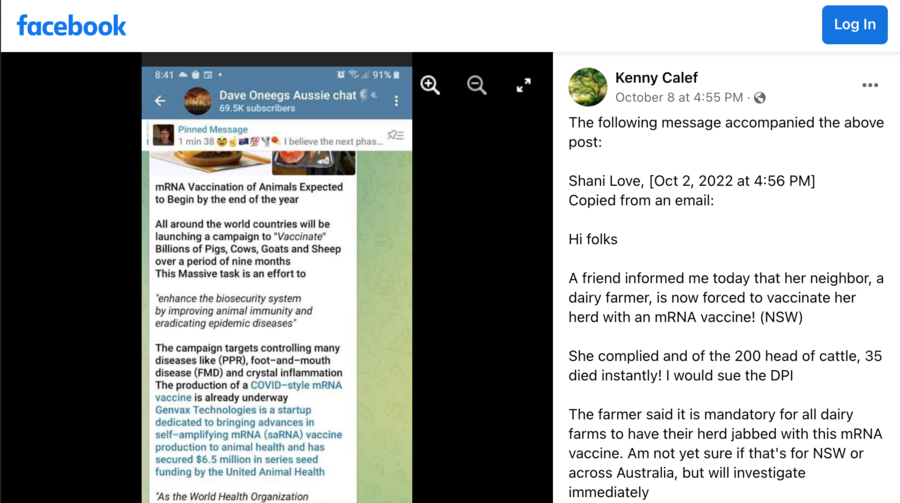 The claim emerged after New South Wales (NSW) and Queensland announced in September 2022 plans to fast-track the development of mRNA vaccines for livestock diseases, including foot-and-mouth disease (FMD) and lumpy skin disease. Such vaccines are not expected to be released until August 2023.

In a statement emailed to Lead Stories on October 24, 2022, the Australia Department of Agriculture, Fisheries and Forestry confirmed that no such vaccine has been rolled out as of this writing, saying:

Reliable and timely access to high quality livestock vaccines has an important role to play in managing outbreaks of exotic animal diseases.
The Australian Government and various State Governments are working with industry to explore opportunities to develop mRNA vaccines, and investigating potential vaccine manufacturers.
mRNA vaccines are still in early-stage development. There are no mRNA veterinary vaccines registered or approved under permit for sale or use in Australia. There are no government mandates to vaccinate livestock with mRNA vaccines.

The NSW government describes them as "the world first mRNA vaccines" for FMD and Lumpy Skin Disease. Also, cattle mRNA vaccines have not been mandated by the government.

A screenshot in the post included information from several sources and unrelated events in a way that misrepresented the facts. We've responded to those claims below.

Australia plans to roll out mRNA vaccines in 2023

As of this writing, no Australian government agency or state body has issued a vaccine mandate to immunize livestock with mRNA vaccines by the end of 2022. However, several state governments have announced plans to roll out vaccines beginning in August 2023. According to a news release issued by the Australian agriculture minister on September 28, 2022, the NSW government announced the goal of fast-tracking the vaccines, a deal made with the U.S. biotechnology company Tiba Biotech.

The threat of FMD is ongoing and there are concerns Lumpy Skin Disease could enter northern Australia this coming wet season, so it's critical we continue to do what we can as quickly as we can.

Current FMD vaccines use the virus itself, and there is yet to be an approved vaccine for use in Australia for Lumpy Skin Disease, so creating mRNA vaccines to combat either disease would be a game-changer for the industry.

mRNA vaccines are cheaper and quicker to produce, highly effective and very safe.

Because they are fully synthetic and do not require any animal or microbial products, they do not carry with them the same risks as traditionally derived vaccines.

The mRNA vaccine is based on a cattle tick vaccine developed several years prior, according to a media statement from the Queensland Cabinet and Ministerial Directory dated October 6, 2022.

Furthermore, there is no evidence that hundreds of privately owned animals have either been vaccinated with mRNA vaccines or killed as a result of their immunization.

Lead Stories contacted Tiba Technologies to determine at what testing phase the mRNA vaccines are and if any adverse health outcomes had been identified. We will update the article if we receive a response.

Genvax Technologies is an Iowa-based animal vaccine startup geared toward developing the "next generation mRNA + nanoparticle vaccines." In August 2022, a $6.5 billion partnership between Genvax and the Indiana-based agricultural research company United Animal Health was announced and published in multiple agricultural wire services (here, here and here).

The self-amplifying mRNA (saRNA) vaccine is described by Genvax as:

The company's proprietary saRNA platform allows for rapid development of herd or flock-specific vaccines matched 100% to the variant strain circulating in an animal-production operation. By inserting a specific transgene or 'gene of interest' (GOI) matched to the variant strain into the platform, the saRNA can generate an antibody response without requiring the whole pathogen.

However, this research is in its preliminary stages and is centered on U.S. goals of moving "the company toward USDA and international regulatory approval of its vaccines in anticipation of any foreign animal disease outbreak in order to increase health and profitability in livestock production."

As of this writing, mRNA livestock vaccines are not widely available in the U.S. but research into their use continues. Lead Stories contacted Genvax for further information and will update the article accordingly.

As the World Health Organization progresses a new pandemic preparedness treaty, it is critical that governments seize the opportunity to invest in livestock systems to improve public health

This quote is from Hung Nguyen-Viet, co-leader of the Animal and Human Health Program at the International Livestock Research Institute (ILRI). It came from a July 19, 2022, press release describing a report on priorities surrounding livestock systems and their intersection with animal, human and environmental health with an emphasis on reducing the risk of disease spillover from livestock.

The remainder of the quote read:

Tackling zoonotic diseases at source would dramatically reduce the number of human illnesses and deaths while saving trillions of dollars in future epidemic or pandemic control.

A keyword search revealed no mention of "mRNA." In fact, the only reference to "vaccine" was:

The recommendations include increasing the availability and uptake of livestock vaccines to reduce the threat of cross-species disease outbreaks, raising public awareness of the precautions needed to limit disease spread, and improving food hygiene and safety standards at informal markets.