Did the Internal Revenue Service donate thousands of dollars to the campaign of Katie Hobbs, the Democratic candidate for governor of Arizona? No, that's not true: The U.S. government agency told Lead Stories in an email that "it does not contribute to political campaigns in any way, shape or form." In addition, the payment on the Hobbs campaign's financial report is labeled "Non-Contribution Income."

The claim about the IRS donation to Hobbs appeared in an Instagram post and video on November 7, 2022. Text on the video asks the question:

Why is the IRS donating money to ANY political situation at all??? 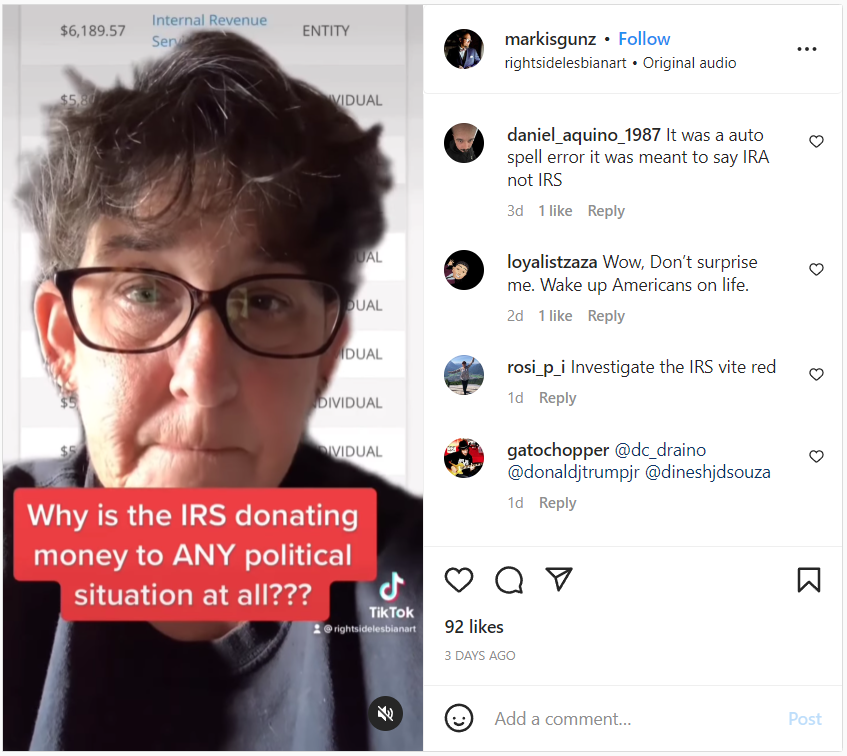 The post focuses on a single line from the financial report of the Elect Katie Hobbs election committee, which highlights a $6,189.57 payment from the IRS on March 18, 2022, described as "Non-Contribution Income." The video on Instagram does not show this description.

The line item from the financial report appears on the Election Funds Portal of the Arizona Secretary of State's website. A screenshot of the page appears below:

After showing the nearly $6,200 payment, the video narrator asks "Why is the IRS donating money to ANY political situation at all?" The answer is it's not. In a November 10, 2022, email, an IRS media relations representative said that the agency cannot comment on any specific taxpayer situation due to federal privacy law, but it could say the following:

The Internal Revenue Service is a government agency; it does not contribute to political campaigns in any way, shape or form. Keep in mind there are a number of reasons why an organization could have a financial or filing interaction with the IRS to meet obligations under federal law.

One possible reason could be an overpayment of taxes that could have resulted in an IRS refund.

Lead Stories contacted the Hobbs campaign for further information, but did not receive a response. This fact check will be updated accordingly if a response is received.