Does a viral video prove that the founder of the World Economic Forum, Klaus Schwab, and other speakers at WEF events planned to establish the "new world order" and "microchip human race"? No, that's not true: The heavily edited social media clip only shows short soundbites taken out of context, which alters the meaning of the speeches.

EveryOnę 🗣; ( Not Enough People Have Seen This So I'm Uploading This A Third Time ) This Was At The World Economics Forum Meeting With The W.H.O & The United Nations 🇺🇳 Treaty. Here Is Klaus Schwab Who Gave This Speech. Pay Attention To Whats Going On Y'all. Stay Aware & Alert At All Times , God Bless

THE ELITES AGENDA FOR THE NEW WORLD ORDER

THEIR AGENDA TO MICROCHIP THE HUMAN RACE 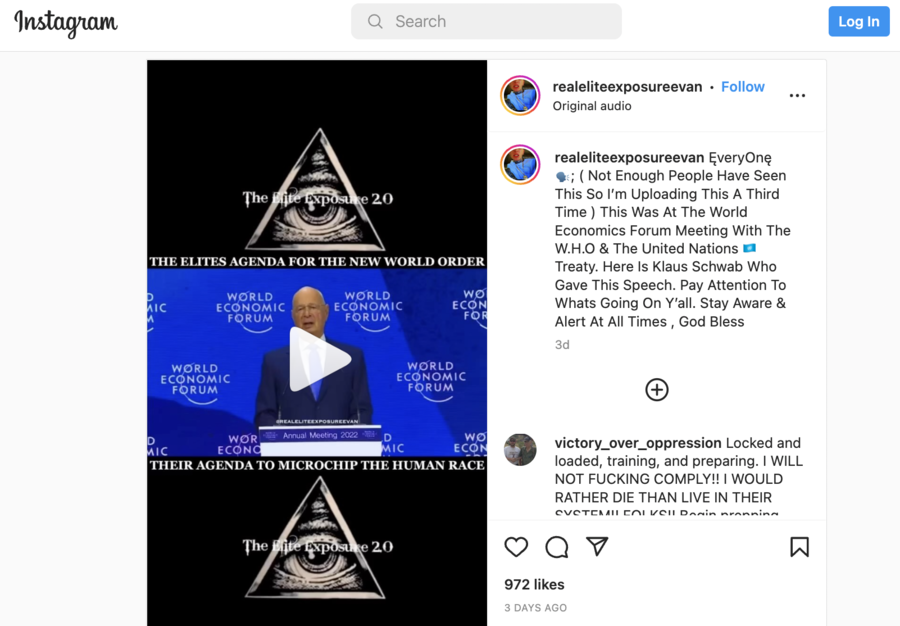 The video opened with a video citation from Klaus Schwab:

A full version of Schwab's speech recorded in May 2022 shows that different fragments of his address were edited together in a way that distorted the intended meaning. He started talking about history at the 8:07 mark, moments after greeting the Ukrainian delegation:

This war is really a turning point of history, and it will reshape our political and our economic landscape in the coming years, but we're also at the tail end of the most serious health catastrophe of the last 100 years, COVID-19, and we have to reinforce our resilience against a new virus possibly, or other risks which we have on the global agenda. We also have to address urgently the issue of climate change and all the other issues related to the preservation of nature. And, finally, we look at the future of the global economy with great concerns: too high inflation, too low growth, too many debts. But what is particularly worrisome are the consequences such as falling back of hundreds of millions of people again into poverty, and possibly tens of millions of people dying of hunger -- we have to be really concerned about those issues.

Before getting to the closing argument that people attending the World Economic Forum have the capacity to affect the future, Schwab clearly emphasizes the direction of the desired changes (at the 9:34 mark), which is the opposite of what the post claim by implication:

So how can Davos contribute to improving the state of the world? First, we noticed that all those challenges cannot be met by governments alone, by business alone, or by civil society. We need collaborative efforts

Another person cited in the post is Yuval Noah Harari, an Israeli-born historian, philosopher and published author who lectures on history at the Hebrew University of Jerusalem. An unsettling future, resulting from economic and societal challenges of the present, is a frequent leitmotif in his works.

The post presented Harari's words as if he meant that "elites" already control the world, having "microchipped the human race":

... everybody has to wear a biometric bracelet, which constantly monitors your blood pressure, your heart rate, your brain activity -- 24 hours a day! You can hack my body, and my brain, and my life, and you can understand me better than I understand myself. No need to wait for Jesus Christ to come back to Earth in order to overcome death. A couple of geeks in a laboratory can do [it]. You have a small elite that pushes things in its own interests, even if it doesn't benefit a vast majority of the population

Harari indeed spoke at the World Economic Forum in 2020. But a full version of his speech shows that his main purpose was to raise awareness about the future dangers associated with a rapid expansion of technologies to every single sphere of human life. Starting from the 7:50 mark, Harari warns against "the rise of such digital dictatorships":

We are already in the midst of an AI arms race, with China and the USA leading the race, and most countries being left far, far behind. Unless we take action to distribute the benefits and power of AI between all humans, AI will likely create immense wealth in a few high-tech hubs while other countries will either go bankrupt or will become exploited data colonies. Now, we aren't talking about the science fiction scenario of robots rebelling against humans. We are talking about far more primitive AI, which is nevertheless enough to disrupt the global balance. Just think what will happen to developing economies once it is cheaper to produce textiles or cars in California than in Mexico? What will happen to politics in your country in 20 years, when somebody in San Francisco or in Beijing knows the entire medical and personal history of every politician, every judge and every journalist in your country?