Is the World Economic Forum (WEF) calling for a new initiative to "slaughter" millions of cats and dogs in order to decrease the effects of climate change? No, that's not true: There is no evidence that this is a real WEF initiative. NewsPunch, where the claim originated, fabricated the claim using some material from a CNN article that does not mention the WEF.

The claim appeared in an article published by NewsPunch on December 9, 2022, titled "WEF Wants To Slaughter Millions of Pet Cats and Dogs To Fight Climate Change" (archived here). It opened:

The World Economic Forum is now calling for millions of cats and dogs worldwide to be slaughtered in an effort to reduce the 'carbon pawprint' they produce as a result of eating meat.

The World Economic Forum is now calling for millions of cats and dogs worldwide to be slaughtered in an effort to reduce the "carbon pawprint" they produce as a result of eating meat.

NewsPunch (formerly YourNewsWire) has published hoaxes and fake news articles in the past so anything they write or publish should be taken with a large grain of salt. Their Facebook page "The People's Voice" even lost its verification checkmark according to a 2018 report from Media Matters For America.

There is no evidence on the WEF website to substantiate the claim of a call for pet "slaughter." There is also no evidence that the World Economic Forum's verified Twitter account posted the tweet seen in the Rumble video version of this article. 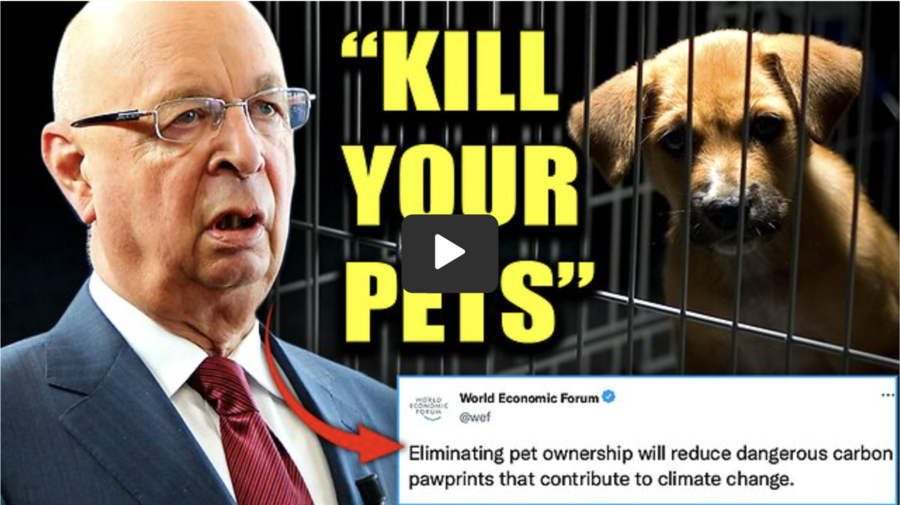 The image of WEF Chairman Klaus Schwab with a caged dog in the background, as seen in the Rumble video thumbnail and the NewsPunch article, is a composite. Here is the Yandex reverse image search results for the image of Schwab, showing him in a World Economic Forum setting.

The NewsPunch article cites a CNN article titled, "Our pets are part of the climate problem. These tips can help minimize their carbon pawprints" as the basis of their claim. NewsPunch claims CNN wants pet owners to get rid of their pets by killing them, the opposite of what's in this article. CNN writes:

But don't panic. Bidding farewell to your best friends is not the answer.

In addition to all the joy they bring, pets have a measurable positive impact on our physical health and mental wellbeing. Having a pet in the family is associated with lower stress, fewer heart attacks, lower rates of depression and increased self-esteem.

Pim Martens, a professor of sustainable development at Maastricht University, was quoted in the CNN article as saying this work does not mean that scientists are against having pets.

Asked if the NewsPunch claim was true, Martens told Lead Stories in a December 13, 2022, email:

The link Martens provided was a Wikipedia link to NewsPunch. The first sentence of the article reads, "NewsPunch is a Los Angeles-based fake news website."

We have contacted the WEF and will update this article if a response is received.