Did Harold Rosenthal, a U.S. Senate aide killed in a 1976 terrorist attack, expose before he died a clandestine Jewish plot to become global "task masters"? No, that's not true: The claim is part of an antisemitic hoax that white supremacists began circulating in 1978. Observers as disparate as the Anti-Defamation League, a U.S. organization dedicated to combating hate speech, and Tom Metzger, founder of the racist group White Aryan Resistance, said the claims about Rosenthal are a fabrication.

The claim appeared in a December 7, 2022, video post on Instagram. The text is an almost verbatim copy of an excerpt from "The Hidden Tyranny," a pamphlet originally released by a white-power group in 1978 that purports to document an interview Rosenthal gave before his death. The passage [page 12 of this PDF], not voiced by Rosenthal, begins:

At first, by controlling the banking system we were able to control corporation capital. Through this, we acquired total monopoly of the movie industry, the radio networks and the newly developing television medias. The printing industry, newspapers, periodicals and technical journals have already fallen into our hands. The richest plum was later to come when we took over the publication of all school materials. Through these vehicles we could mold public opinion to suit our own purposes. The only thing that exists is an unthinking majority, and unthinking they will remain, as long as their escape from our rigorous service is the opiate of our entertainment industry. By controlling the industry, we have become the task masters and the people the slaves. 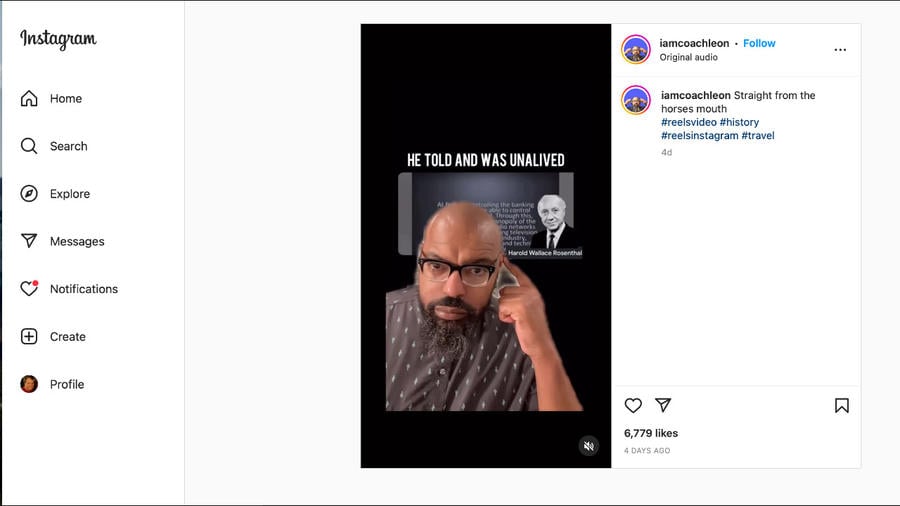 The video is headlined "HE TOLD AND WAS UNALIVED." This is a reference to "The Hidden Tyranny's" claim that Rosenthal was not murdered by terrorists in Istanbul, Turkey on August 12, 1976, but rather was assasinated by the Israeli intelligence service, Mossad, as revenge for his decision to disclose the supposed Jewish scheme for world domination.

The photo that appears in the video does not show Rosenthal, who was 29 when he died, but rather his boss, U.S. Sen. Jacob Javits, a Republican politician who represented the state of New York in the Senate from 1957 to 1981. This error may stem from the fact that an online version of "The Hidden Tyranny" misleadingly presents Javits' headshot next to Rosenthal's name. 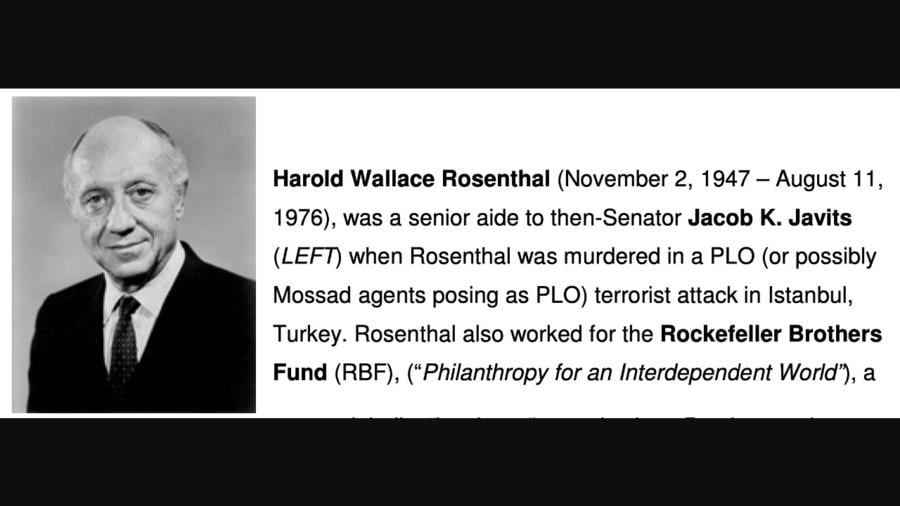 The 1978 version of "The Hidden Tyranny" was written and published by Walter White, head of the white-power organization The Western Front. White claimed to have conducted an interview with Rosenthal shortly before his death in 1976 and to have decided to delay publication "out of respect" for Rosenthal's bereaved family.

The Anti-Defamation League (ADL) condemned White's claim in an article published in 2000:

The Hidden Tyranny resembles The Protocols of the Elders of Zion in that it is a fabricated document, masquerading as fact, which claims special knowledge of a Jewish plot to control the world. Though White alleged that the booklet contains his interview with Harold Rosenthal, a 29-year-old, Jewish administrative assistant to the U.S. Senator Jacob Javits, the contents of The Hidden Tyranny are actually a product of White's imagination.

One of White's fellow travelers, former Ku Klux Klan grand dragon Tom Metzger, also said the Rosenthal interview was a forgery in a November 2010 comment in his newsletter, "The Insurgent:"

That interview never took place. Walter White operated free and loose on some subjects, like this one ... That interview is bogus. There is plenty of valid material to use against the Jews.

Near the end of "The Hidden Tyranny," White said he was unable to release the taped recordings of his interview with Rosenthal -- material that might have helped establish the conversation's authenticity -- because he had promised Rosenthal that it "is not to be reproduced in any manner other than via WESTERN FRONT publication [and] I prefer to abide by our agreement."

A copy of the 1978 document on the website of the Ronald Reagan Presidential Library bears the scribbled note "file - kook" on the first page.

The claims about the Rosenthal interview were featured in the 2018 movie "Hebrews to Negroes: Wake Up Black America," which the ADL has criticized for antisemitic content. The film attracted fresh interest after U.S. basketball star Kyrie Irving endorsed it in an October 2022 tweet (since deleted.)