Did the Centers for Disease Control and Prevention (CDC) launch an anti-smoking effort with a video ad that uses the tagline "It's Gay to Smoke"? No, that's not true: The video is from a fake story created more than a decade ago by the satire news site The Onion, and the CDC told Lead Stories the agency had never produced or endorsed such a campaign.

The claim appeared in a December 31, 2022, video on Facebook under the title "This was a real ad 🤦🏽‍♂️." It shows video of what appear to be teenage boys meeting in a school hallway and exchanging a whispered message before ducking into a bathroom. Onscreen text says:

Smoking? Or gay? It's gay to smoke. 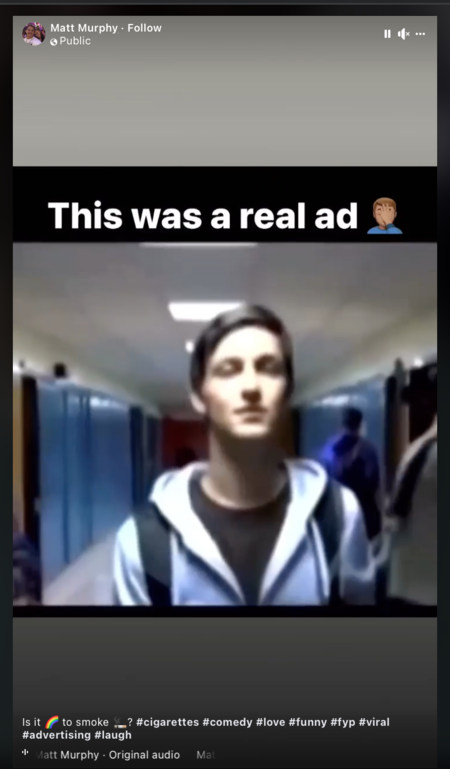 The post shows the boys walking toward each other, standing with their faces and hands nearly touching and looking around suspiciously as if making sure no one will see them enter the bathroom. No one is seen smoking in the video although a pack of cigarettes is seen poking out of one boy's pants pocket.

The video was created by the satire site The Onion as a fake news story about anti-smoking public service announcements for its YouTube-based program "today NOW!"

The made-up "today NOW!" story first aired on October 5, 2009. The Facebook post's video is one of several clips in the story about a fake CDC campaign that tries to scare young people away from smoking and drinking by falsely linking such activities to sexual orientation. The story's title, "CDC Unveils New Anti-Smoking Ads" and a full tagline stating the campaign was "Brought to you by the U.S. Centers for Disease Control and Prevention" appears later in the video. 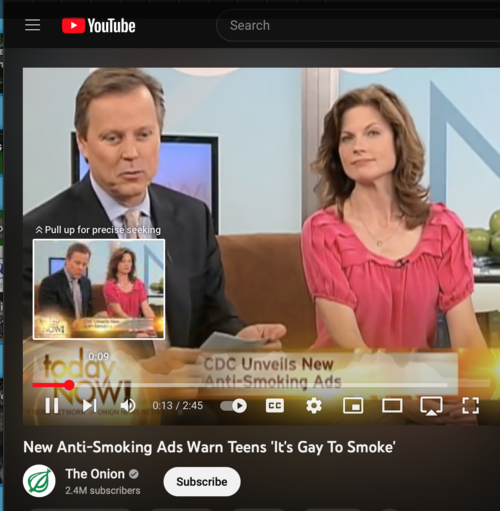 The video clips are peppered throughout an interview by "today NOW!" hosts with a purported CDC doctor who is said to be in charge of the PSAs.

A screenshot of the clip from the "today NOW!" story shows it matches the clip used in the Facebook video post. 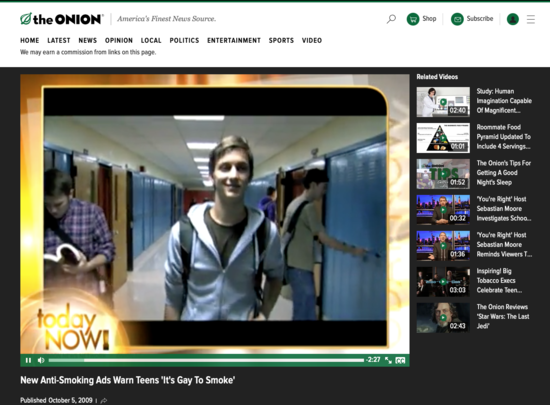 A partial view of a graphic tagline on the Facebook video reads, "u by the U.S. Centers for Disease Control a," which suggests the video was made by the CDC.

In a January 4, 2023 email response to a Lead Stories request for comment, a CDC spokesman called the ad satire and said the agency "had no involvement in its development and has never produced or endorsed such a campaign."

The false claims from The Onion's "today NOW!" interview have been repeatedly shared on social media sites over the past decade including on Facebook, YouTube and Instagram -- even though the online program appears to have ended in 2015.