Is CNN shutting down its operations in Atlanta? No, that's not true: CNN will maintain its hub in Atlanta but move its headquarters from its downtown location to Techwood Turner Broadcasting campus in midtown Atlanta, according to a CNN spokesman who replied to a Lead Stories query on January 20, 2023. 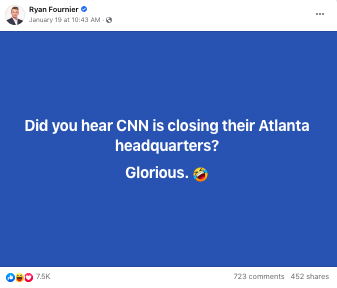 CNN in Atlanta is moving to the Techwood campus this year. While I don't have the exact dates for you, the move will happen in stages and it will finish by the end of this year.

And for fun Atlanta facts: The Techwood Campus is where CNN started with Ted Turner, so it's a homecoming of sorts. Our CNN Master Control is already there, and we will join our colleagues with TNT, TBS, TCM, Cartoon Network and Adult Swim.