The claim appeared in a post on Instagram published on January 18, 2023, under the title "German Gov't Claims Investigating Covid Vaccines Would Be 'Dangerous For Democracy'" The post's description simply says: 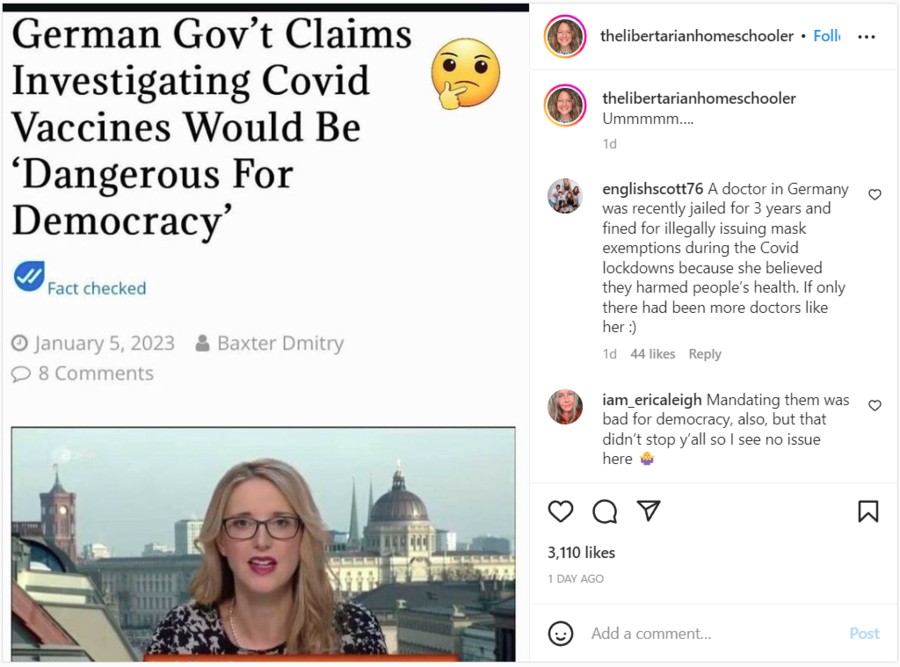 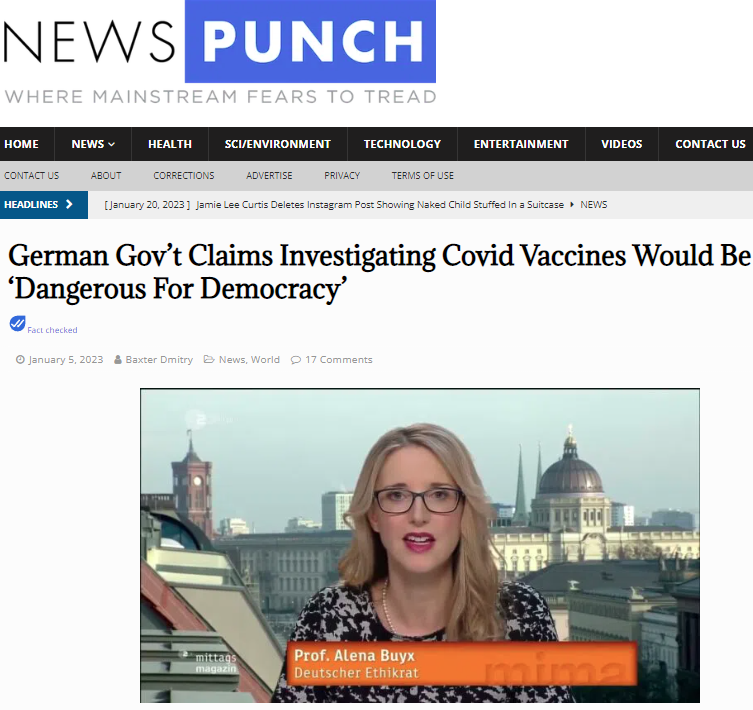 The NewsPunch article ultimately got its information from the German weekly newspaper Die Zeit, which published its interview with Buyx (archived here) on January 1, 2023, and updated it on January 4, 2023.. From Die Zeit Online, the article was picked up by the German website pleiteticker.de, which roughly translates to bankruptcy or broke ticker. It bills itself as "news, opinion & more."

In the Die Zeit interview, Buyx is asked, "Do we still have to learn how to mourn the losses of the pandemic? This is her answer, in part:

For something to heal, you have to stop and feel the pain. We must acknowledge what we have all lost in this pandemic. Naming and recording these many losses is extremely important for the healing process. If that doesn't happen, then it ferments, then the wound festers and doesn't heal.

ZEIT ONLINE: And then?

Buyx: Then people get angry and want someone to blame. The search for the culprit is often sparked off by concrete losses. This need is understandable, but incredibly toxic. It has a profound effect on polarizing society. And it is a threat to democracy. Because people with unprocessed anger have been shown to be more inclined to violence and extreme political positions.

The translated version of the Die Zeit interview uses an expression similar to the one in the NewsPunch article. But instead of saying "dangerous for democracy," it says, "threat to democracy." While the expressions are essentially the same, the context is not the same as in the NewsPunch article: First, Buyx is not speaking on behalf of the German government and, second, she is not talking about a government investigation of COVID-19 vaccines. Instead, Buyx is talking about the national healing that needs to take place following the pandemic in light of the public debate in Germany about how the unvaccinated were discriminated against.

Buyx was elected chair of the German Ethics Council in May 2020, near the beginning of the pandemic. The English version of the organization's website says the Council "deals with the great questions of life. With its opinions and recommendations, it provides orientation for society and politics. The members are appointed by the President of the German Bundestag," the national parliament. Germany's federal government is run by the chancellor.

NewsPunch has published numerous fake news articles in the past. Their Facebook page "The People's Voice" even lost its verification checkmark, according to a 2018 report from Media Matters For America.

The NewsPunch site's terms of use (archived here) also make it clear that the organization does not stand behind the accuracy of its reporting: