Even before Russia's full-scale 2022 war in Ukraine, Bandera was a potent symbol -- a fascist to critics, a patriot to fans. He was the leader of a wing of the militant underground Organization of Ukrainian Nationalists that sided with Nazi Germany in a bid to end Soviet rule of his homeland. Bandera's followers ultimately fought both Soviet and German forces -- Bandera himself did a stint in the Sachenshausen concentration camp after refusing to revoke his support for Ukrainian independence.

Many historians, however, associate the group with the ethnic cleansing of Jews and Poles as well as with the fight for a sovereign Ukrainian state. The KGB assassinated Bandera in Munich in 1959.

To support the Kremlin's claim that the Russian invasion of Ukraine is about "de-nazification," government-controlled and government-friendly Russian media routinely report about the Ukrainian government's supposed attitude toward Bandera.

The claim that Ukrainians had used the bodies of slain Russian soldiers to form a battlefield portrait of Bandera first appeared on the Ukrainian-language Facebook page "TFN" ("Only Good News" or "Tiko Fayni Novini" in Ukrainian) on January 1, 2023. TFN posted an apparent screenshot of the Komsomolskaya Pravda home page (archived here), which showed a black-and-white photo of Bandera beneath a headline that said in Russian, "On his birthday, Ukrainian Nazis laid out on a battlefield a portrait of Stepan Bandera, made out of the bodies of Russian soldiers."

This is what the image looked like at the time of the writing of this fact check: 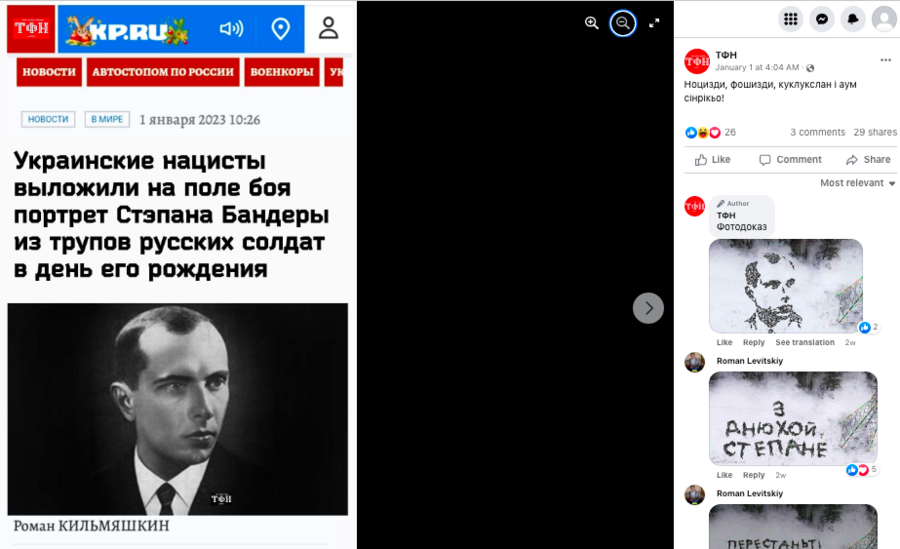 The post's Ukrainian-language image caption, with deliberately garbled spellings for most of its words, read:

The image, which TFN posted on Bandera's birthday, quickly spread throughout Ukrainian social media, with users mocking the apparent stupidity of Komsomolskaya Pravda, a national publication that dates from the Soviet era, in believing the claim about a Bandera portrait made out of corpses. One example of such a post can be seen here on Facebook.

Along with the fake screenshot, a digital portrait of Bandera, made out of bodies painted black, also went viral. Posted images featured inscriptions automatically generated by the chat-bot "Papka v paketi" ("Daddy in a Pocket").

At least one prominent Ukrainian news organization fell for the hoax, too. On January 2, 2023, Ukraine's online news outlet Hromadske posted on its Facebook page:

On Bandera's birthday, Russian media spread fake news that Ukrainians laid out Bandera's portrait by the bodies of the killed occupiers. 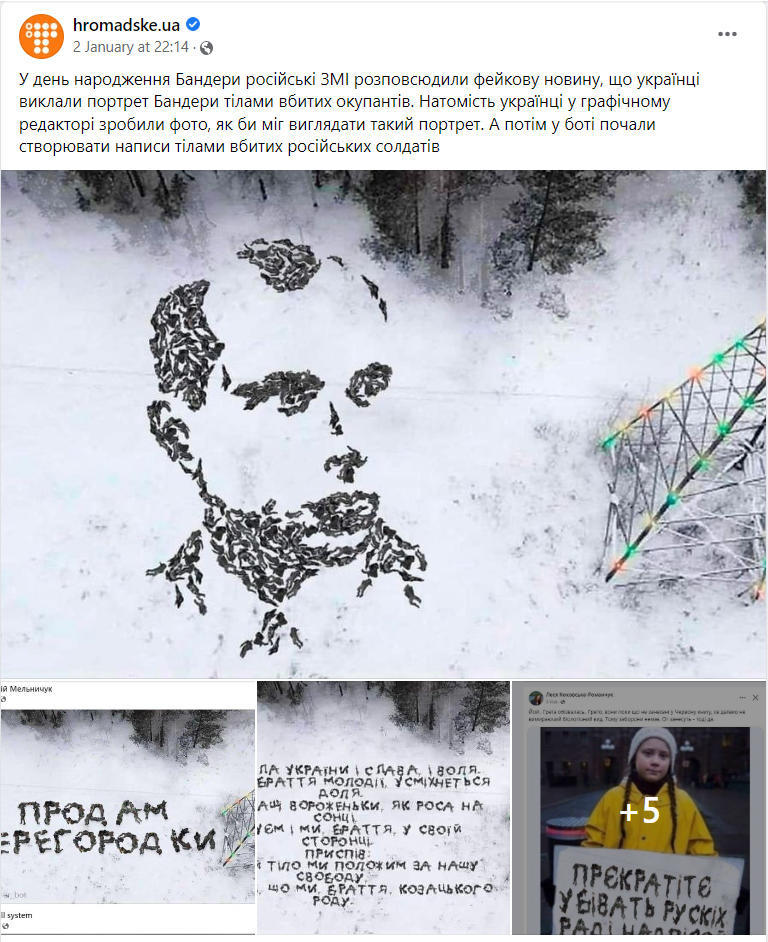 In fact, neither Komsomolskaya Pravda nor other mainstream Russian media outlets published anything about Ukrainians creating a portrait of Bandera from Russian soldiers' corpses.

A Google search in Russian for the query "украинские нацисты выложили на поле боя портрет степана бандеры site:ru" ("Ukrainian Nazis laid out a portrait of Stepan Bandera on a battlefield site:ru"), with searches restricted to Russia's .ru domain, led to no relevant results. Without the .ru restriction, relevant links from this search led only to Ukrainian, not Russian, websites.

The screenshot itself contains clues that it is fake. The most notable giveaway is a TFN inscription in the image's upper left-hand corner, next to Komsomolskaya Pravda's logo. The same TFN watermark can be seen on the portrait of Bandera itself.

A search for the TFN logo on Facebook led to the TFN page, which describes itself as a "crime news agency," but only posts content that satirizes Russian government policies and media.

The headline of Komsomolskaya Pravda's supposed coverage of the fake Bandera birthday portrait contains a misspelling of Bandera's first name and uses a form of the word "Russian" ("Russkiye") that Russian media do not use to describe Russian ("Rossiiskiye") soldiers.

As seen below, the headline's font also differs from the font Komsomolskaya Pravda actually uses: 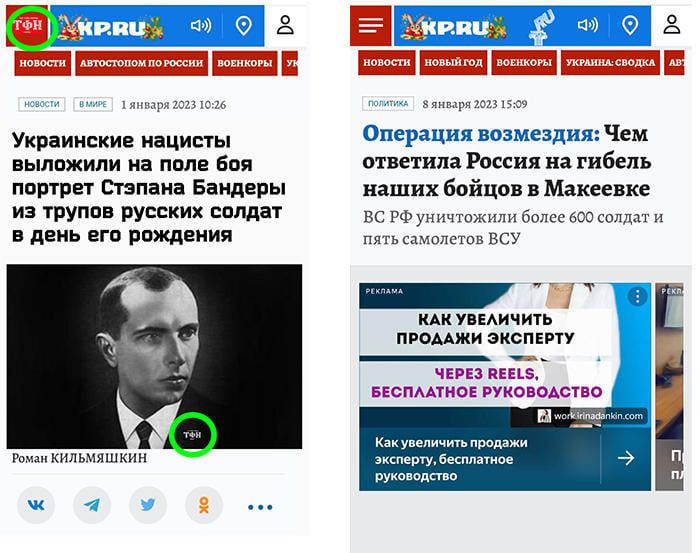 When asked about the reason for the publication of the fake screenshot, he responded:

Humor is our weapon.

Other Lead Stories fact checks of claims about the ongoing war in Ukraine can be found here.