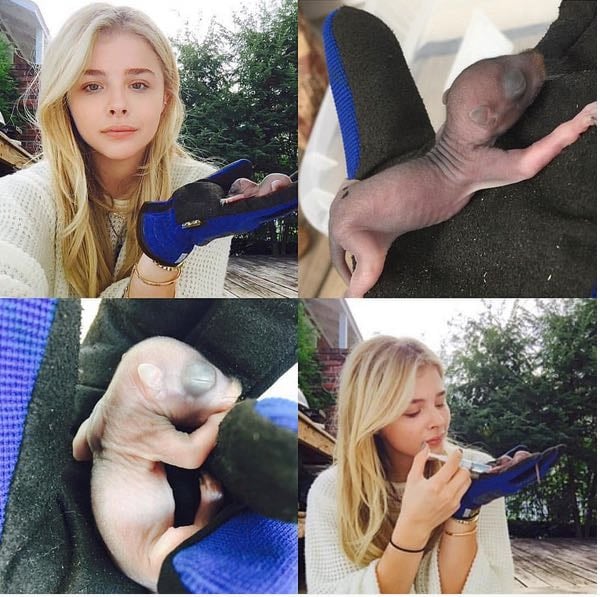 Chloe Grace Moretz, 18, is one of Hollywood's busiest young actresses, had her hands full for three days as the surrogate mother to a three very young squirrels she rescued after they were abandoned by their mother.

"They were abandoned so I took it upon myself to keep these little babies alive by getting them warmed up, rehydrated, and fed," Chloe posted on Instagram. "Can't wait to see Them slowly but surely start to thrive as they begin to grow ! :)"

"She is truly nursing them back to health after their mother left them," her brother and acting coach Trevor Duke Moretz said in an Instagram post. "It's truly amazing to see her dedication. She's feeding them every 45 minutes and heating them. It's a lot of work but she wouldn't have it any other way."

Moretz, who recently won the best drama actress Teen Choice award for playing a teen in a coma in the film "If I Stay," "will not let them die," her mom told Lead Stories.

"She is the squirrel whisperer," she said.

Moretz named the girl Eleanor and the two boys are Theodore and Simon.

Chloe's motherhood stint ended after three days of round-the-clock work when she handed them over to a Georgia wildlife rescue group, which will take care of them until they can be released back into the wild.

@peta yes ! They're actually with a wildlife rescue now, so they can be perfectly cared for and appropriately releases back into the wild !

She found them while on a visit with relatives in her native Georgia.

Lead Stories' Trendolizer has never found abandoned squirrels, but it does scour the social networks for stories about Chloe Grace Moretz and animal rescues. Scroll down to read the latest.