TMZWorldNews (not TMZ.com!) has recently published a trending story claiming an alien was found hibernating in the Great Pyramid of Giza. We strongly suspect this story is a hoax because TMZWorldNews is known more for publishing made up stories to drive click traffic than for its expertise on ancient Egyptian archaeology and xenobiology. 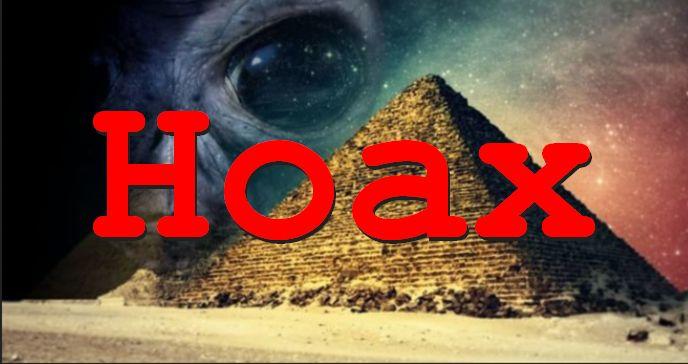 In the March 2000 issue of the Egyptian magazine Rose al-Yūsuf, a strange article posed the same question.

As the story goes, in the year 1988, a French Egyptologist named Louis Caparat was exploring the interior of the Great Pyramid when he accidentally discovered a secret chamber. The room had been sealed right after the pyramid was completed, more than 4,500 years ago, and it contained "a crystalline transparent case."

Apparently, the crystalline case served as life-support for a small humanoid alien or human-alien hybrid, which Caparat believed was hibernating or in a stage of suspended animation.

The magazine Rose al-Yūsuf does indeed exist but it is concerned more with politics than with ancient aliens. And why would news about a 1988 discovery suddenly go trending again? The story also has great detail about the supposed mission of the alien, all explained in 'inscriptions' on a papyrus scroll whch unnamed archaeologists were able to read.

Still, if the discovery dates back from 1988, why aren't there more sources about the story and why isn't more information known by now? In 28 years scientists can do an awful lot of research, but strangely enough none of them seem to have published anything in any respected scientific publication about this astonishing find.

There are other sources who mention the story but they are all viral or fake news websites who seem to have copied most of the story verbatim from each other, adding or swapping an image here and there:

Some of the above stories even use pictures taken from Weekly World News, which Wikipedia calls a 'largely fictional news tabloid'.

With such a collection of trustworthy and reliable sources behind the story, we feel confident in saying the story is as fake as a three dollar bill. Don't be fooled like all these people were: