There is a ridiculous story trending on the webs stating "Family Drowns After Leaving Sunroof Open In Automated Carwash." NOT TRUE. The story comes from a known satire/hoax site but most people aren't aware of that when they share it.

The story starts with "A family of three died yesterday after inadvertently leaving their sunroof open when going through an automated carwash. Mary and Roger Jones, both 32, and their daughter, Julie, 11, were all killed after the car filled with water."

It's a tragic, horrible thing," said carwash owner Joe Goldsmith. "Thing is, we have signs everywhere reminding people to close their windows. The water comes fast and furious, and it's dangerous to have windows open. This is the first time in my 40 years as a carwash owner that something like this has happened, though." According to police, Roger Jones, who was driving, left the sunroof of their vehicle open as they entered the automated carwash. Security footage shows that a few seconds after they enter, the sunroof does begin to close, but the water reportedly shorted out the motor.

Come on now. Ever heard of opening a door? Continuing:

The car was filled with over 200 gallons of soapy, sudsy, 300-degree water," said police chief Miles Smith. "It's a real tragedy, but a real cautionary tale as well. Always make sure you close your windows."

The picture of the car wash with police out front actually comes from a 2013 story titled "Yonkers Car Wash Robbed, Three In Custody." 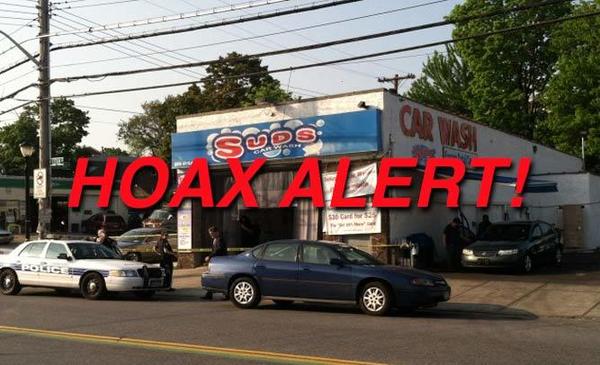