There is a NOT TRUE story making the rounds on the internet claiming "6 Year Old Gets Entire Class 'High' After Bringing Mom's Marijuana Edibles To School." The story comes from a known hoax site but most people that read the story don't understand that. The sad thing about this NOT TRUE story is that this type of thing is actually happening in schools across the nation.

The story starts with:

19 kindergarten students were taken to a St. Louis, Missouri emergency room after a 6 year-old boy brought his mom's marijuana edibles to class and handed them out. His mom, 21-year-old Candace Freeman, has been arrested and booked on child endangerment charges after she left her homemade edibles on the counter, giving her 6 year-old access to the drugs.

Although very plausible, NOT TRUE. Continuing:

I always allow the children 10 minutes in the morning to socialize," said Missy Gilbert, the kindergarten teacher in charge of class. "I got them all settled, and about 30 minutes later, they all started giggling uncontrollably. I was really starting to get angry because none of them would listen to me. They began falling out of their seats, crying, laughing, saying 'wow' and one kid was huddled in the corner crying that the police were looking for him. Two of the little girls began twerking, I had no idea what was going on. That's when I called the principal in for help."

The mugshot used in the hoax story comes from a 2013 story about a woman causing a police chase while high on meth. As for the blurred image of the children, it comes from a 2014 article titled "Fighting Against Strabismus." 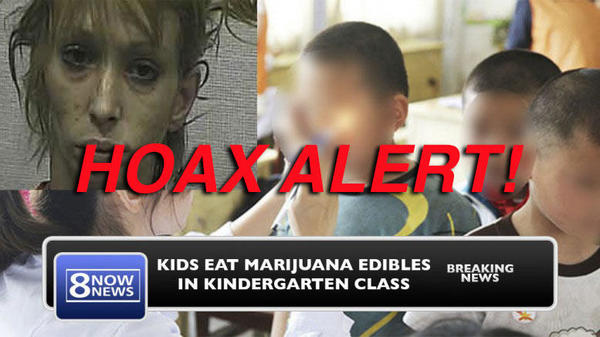 Though the story is NOT TRUE, it's not really out of bounds. With the legalization of medicinal and recreational marijuana use, the edibles market is definitely not what it used to be. Manufacturers are producing such things as gummy bears, lollipops, lip balm, and these items are easily getting in the hands of young children. The government is dialing up the regulations but it's still a very gray area.