Nothing like a good 'Stars and Bars' story to stir up some controversy is what the writers at United Media Publishing probably thought when they wrote the story about 16-year old Tyler Lancanster (ed. their spelling) bringing a 'Lynryd Skynyrd' (ed. their spelling too) record to school that featured the Confederate battle flag on the label. Poor Tyler then got a 14-day suspension from Bingham North High School for his troubles. 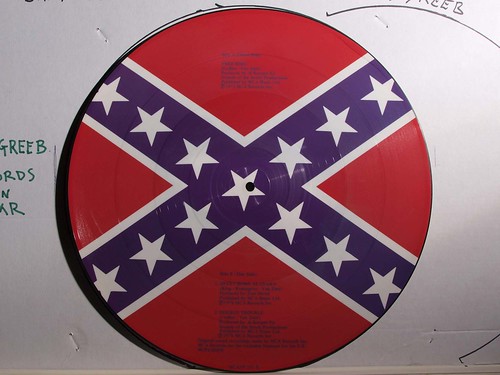 Supposedly the student was asked to bring a record belonging to his parents to school for his first-period cultural studies class. When he brought the 1976 record with him he alledgedly got a suspension for it even though the boy's father, a 'Blaine Lancaster' (ed. note the different spelling) was quoted as saying:

There's just nothing hateful or racist about it

The story goes on to say that the principal of the school, a 'Devin Withers' spoke to reporters of the local ABC affiliate and claimed that :

All displays of the confederate flag are strictly forbidden on school grounds including those that are associated with bands such as Lynryd Skynyrd or other forms of media or pop-culture. At Bingham North, we have drawn a line in the sand and have zero-tolerance for displays of hate-speech or racial intolerance, regardless of how subtle they may be.

Of course the story is not true at all. United Media Publishing is a website that specializes in publishing made-up news stories designed to get people angry or upset enough so they share these articles online without checking the source properly.

So don't be like the thousands of people who shared this 'news' without thinking. Listen to some Lynyrd Skynyrd instead!