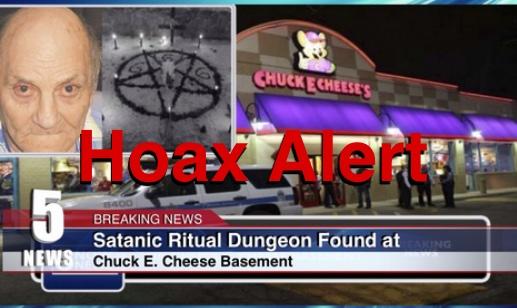 Lead Stories' Trendolizer has detected the resurgance of an old hoax claiming that a satanic ritual dungeon was found in the basement of a Chuck E. Cheese. As one might imagine, this story is completely FAKE.

Authorities have identified the skeletal remains found in a Chicago Chuck E. Cheese basement as those of four teenagers that disappeared between 2013 - 2015. Multiple media outlets report that the teenagers were local residents of the city. Charged in their deaths is the owner, 68-year-old Melvin Wallace. There is another woman being charged as an accessory to the murders.

Court documents allege that Wallace regularly performed "Satanic rituals" and "animal sacrifices" in the Chuck E. Cheese basement where the bodies were found.

In reality, the base image of a Chuck E. Cheese was taken from a 2013 article about a fight that ensued when patrons of the well-known pizza joint were trying to redeem tickets for prizes. The man pictured on the FAKE story is actually a repeat sex offender named William Cubbage, who was arrested in 2000.

Again, a satanic ritual dungeon WAS NOT found in a Chuck E. Cheese basement, so tell your friends to stop sharing it on social media!