While we suspect most people sharing this story don't really believe it, we couldn't resist pointing out that it is not true. The Cincinatti Zoo is not claiming that it's silverback ape Harambe, shot to death last weekend, had "ties to ISIS," contrary to a report that is trending on Facebook.

There are at least two version of the hoax report trending.

One quotes purported zoo spokesman Hans Fischer saying he "started getting suspicious a few months ago. He stopped being social and became very withdrawn."

"But the zoo has denied it was attempting to quell the moral outrage that has followed the killing of Harambe -- a silverback gorilla who was shot after a child fell into his enclosure -- by blaming it on terrorists." 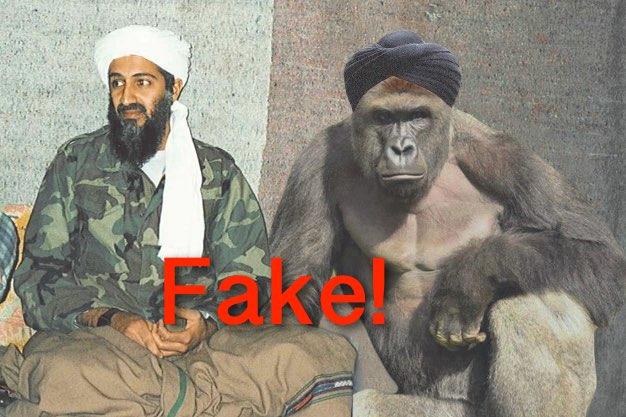 Another version of the fake story even included a fake photo showing Harambe sitting with Al Qaeda leader Osama bin Laden. It said the ape was captured in Afghanistan where it was connected to Al Qaeda. It quotes "zookeeper Ryan Schellis" talking about his earlier suspicions about Harambe:

"We knew something was going on when Harambe would shout what sounded like 'allahu akbar' and even reciting the Koran at night time. I was scared, I thought I was in the Middle East."

This graph below shows the trajectory of the hoax story as measured by Lead Stories' Trendolizer system.